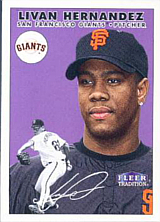 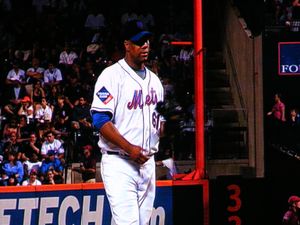 Liván Hernández was only the fourth player to be named MVP of both a League Championship Series and a World Series in the same season, accomplishing the feat in 1997, when the Florida Marlins won their first World Series title. The first three were Willie Stargell in 1979, Darrell Porter in 1982 and Orel Hershiser in 1988. Cole Hamels (2008) and David Freese (2011) have since joined the club.

Hernández carried Cuba to titles in the 1992 World Junior Championship and 1993 World Junior Championship. In 1992, he allowed only one hit and no runs in 12 innings in the round-robin phase, striking out 19. He then threw a 6-hit, 7-strikeout, one-run game against the U.S. in the Gold Medal contest, facing a lineup which included Alex Rodriguez, Preston Wilson and A.J. Hinch. In 1993, he was 2-0 with a 1.59 ERA in the round-robin phase, striking out 21 and allowing 11 hits in 17 innings then holding the US to one run in 9 innings in the Gold Medal game, striking out 17 and allowing only 5 hits. Hernández struck out 14 in 9 2/3 IP in the 1994 Baseball World Cup, allowing no runs and winning one game.

He had played 18 major league games when he started Game 1 of the 1997 World Series; this is the record (through 2012) for fewest appearances before a Game 1 start in the World Series. After moving to the San Francisco Giants, he started and lost Game 7 of the 2002 World Series against rookie John Lackey of the Anaheim Angels, after also pitching poorly in his other start in Game 3. The following winter he got into a violent altercation in a parking lot in which he was alleged to have swung a golf club at an elderly man. That wore out his welcome with the Giants and he was traded to the Montréal Expos in spring training of 2003 in what was widely considered as the Expos doing the Giants a favor. But Montreal had the last laugh, as Livan rebounded with a solid year that re-launched his career. That year, the average Expos pitcher threw 50 innings; Livan threw 233. He went 15-10, 3.20 as the Expos unexpectedly contented for the wild card into September, then led the National League in starts, complete games and innings pitched in 2004, the Expos' last season in Montreal. He made the All-Star team for the first time and also won the Silver Slugger Award as the NL's best-hitting pitcher that season, even though he was only 11-15, the result of pitching in front of a badly depleted team. He returned to the All-Star Game in 2005, this time representing the Washington Nationals as he had followed the Expos to the nation's capital when they relocated following the 2004 season. He again won 15 games and led the NL in innings pitched that year, going 15-10, 3.98 in 35 starts and 246 1/3 innings.

After last pitching in the majors with the Milwaukee Brewers in 2012, Livan did not play in 2013. He rejoined the Washington Nationals for their winter FanFest in 2014 and served as a pitching instructor in their spring camp that season, but he only officially signed his retirement papers in March of that year. In 2017 he was the pitching coach for the World team at the 2017 Futures Game, working alongside former teammates from the Marlins' 1997 championship team. Shortly after that, it was revealed that he had filed for personal bankruptcy at a federal court in Fort Lauderdale, FL. He became eligible for the Hall of Fame in the 2018 Hall of Fame Election, although he was not expected to receive much support; indeed, he received just one vote and was dropped off the ballot.