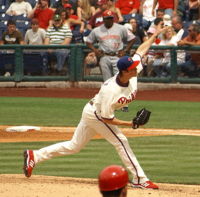 Pitcher Cole Hamels was selected by the Philadelphia Phillies in the first round of the 2002 amateur draft. He was signed by scout Darrell Conner and made his pro debut that summer. Despite missing most of 2004 and 2005 with injuries, he was still a very highly touted prospect when he made his big league debut in 2006. He didn't disappoint, allowing only one hit and striking out seven in a five-inning outing.

Hamels was the hero of the Phillies' conquest of a World Series title in 2008, being named MVP in both the NLCS, when the Phils defeated the Los Angeles Dodgers, and in their win over the Tampa Bay Rays in the Fall Classic.

On May 6, 2012, he decided to administer some frontier justice when facing Washington Nationals phenom Bryce Harper for the first time. He plunked him in the 1st inning, and after the game admitted that he had done so deliberately, because Harper was showing too much of a cocky attitude after only a week in the majors; he added that this was his way of demonstrating that he was "old school". This earned him the opprobrium of Nats GM Mike Rizzo, who called him "gutless", "classless" and "fake tough". On the field, Harper replied by stealing home off Hamels when he was attempting a pick-off throw to first base, and Washington pitcher Jordan Zimmermann plunked him in turn when he came up to bat for the first time. Hamels was unfazed, giving up a single run in 8 innings on his way to a 9-1 win. The next day, Hamels was handed a five-game suspension for his action, while Rizzo was fined for his verbal outburst. He hit his first career home run off Matt Cain of the San Francisco Giants on July 21st that year; ironically, it came just after he had himself surrendered a homer to Cain in the top of the same inning. About to become a free agent at the end of the season, there was speculation that he might be dealt at the trading deadline, with the Phillies uncharacteristically struggling in last place in the NL East, but instead the Phils announced on July 25th that he had signed a six-year extension with the team, worth $144 million. Shortly after signing the contract, he pitched back-to-back shutouts for the Phils, first blanking the Atlanta Braves, 3-0, on August 7th, then following up with a 4-0 whitewash of the Miami Marlins on August 13th, running his personal scoreless streak to 22 innings. He finished the year with the best stats of any Phillies pitcher, with a record of 17-6, 3.05 and 216 strikeouts in 215 1/3 innings, while throwing a pair of shutouts.

Hamels had another good season in 2013, in spite of the fact that his record was only 9-13. His ERA was a solid 3.60 in 220 innings, good for an ERA+ of 106, and he struck out 202 batters. The Phillies never were in contention that year, leading to the impression that he was doing poorly. He did run into problems during spring training in 2014, however, as he showed up with inflammation in his throwing shoulder after feeling discomfort starting in November of the off-season. He was ordered rest, but suffered a setback in early March. He explained that he was feeling no pain, but that, on the other hand, his arm was "fatigued out", making it unlikely he would be ready to pitch at the start of the season. He made his debut on April 23rd, losing 5-2 to the Dodgers. He was at 99 career wins at the time, but had to wait until his 5th start of the year on May 17th to record his 100th win, 12-1 over the Cincinnati Reds. He was his old self that day, striking out 10 over 7 innings in shutting down his opponents, including striking out the side on 9 pitches in the 3rd inning when he got Zack Cozart, Brandon Phillips and Todd Frazier in order. That improved his career record over Cincinnati to 9-0, 1.49. On September 1st, he combined with three relievers - Jake Diekman, Ken Giles and Jonathan Papelbon - in a 7-0 no-hitter over the Atlanta Braves. He pitched the first 6 innings, but needed 108 pitches as he walked 5 and struck out 7 on a muggy day, which made it unthinkable that he could complete the feat by himself. Each of the relievers tossed a perfect inning, including Giles who struck out the side in the 8th. The Philles were leading 2-0 when Hamels left the game and added 5 more runs over the last three innings to run away with the win. from June 1st until the end of the season, he made 23 consecutive starts in which he gave up 3 runs or fewer, tying a major league record. As a result, he finished the season with a 2,46 ERA, even though his record was an uninspiring 9-9. It's not as if he was being taken out of games early either, as he topped 200 innings for the 5th straight season, with 204 2/3, and also struck out 198 opponents.

He spent most of the first half of the 2015 season with his name bandied about in various trade rumors, a result of the Phillies having a wretched first half. On July 25th, he put that aside, however, as he pitched a complete game no-hitter against the Chicago Cubs, beating them, 5-0, at Wrigley Field. He struck out 12 and walked 2 in the game and it was the first time the Cubs had been the victims of a no-hitter since Sandy Koufax's perfect game against them on September 9, 1965. The long rumored trade happened before he could make his next start, as on July 29th he and reliever Jake Diekman were sent to the Texas Rangers in return for P Matt Harrison and prospects Jerad Eickhoff, Alec Asher, Nick Williams, Jorge Alfaro and Jake Thompson. Hamels was 6-7, 3.64 in 20 starts at the time of the trade. He then pitched like an ace for the Rangers over the last two months, with a 7-1 record and a 3.66 ERA in 12 starts. In total, he 13-8, 3.65 on the year. His pitching was a major contribution to the Rangers winning a division title, and he then started twice against the Toronto Blue Jays in the Division Series. In Game 2, he gave up 4 runs (2 earned) in 7 innings as Texas won 6-4, then in Game 5, he gave up 5 runs, but again only 2 earned, in 6 1/3 innings as the Rangers lost. He was not involved in the decision in either game, and in game 5, manager Jeff Banister chose him over Yovani Gallardo who had been the Game 1 starter.

Hamels won his first five decisions in 2016, giving him 12 straight wins as he had won his final 7 decision the previous season. His first loss only came in his 10th start, on May 27th. On June 12th, he recorded the 2,000th strikeout of his career, fanning Leonys Martin in a 6-4 win over the Seattle Mariners. He went 15-5, 3.32 as the Rangers' ace that season, pitching 200 2/3 innings and striking out an even 200 batters. However, in his only postseason start in Game 1 of the ALDS on October 6th, he was rocked by the Toronto Blue Jays, allowing 7 runs in 3 1/3 innings to be charged with a 10-1 loss. In 2017, he was limited to 24 starts and went 11-6, 4.20 as the Rangers sank back in the standings. He pitched just 148 innings, and his strikeout rate fell considerably, as he recorded just 105 Ks. He started slowly in 2017 and was just 5-9 with an ERA of 4.72 on July 26th when he was traded to the Chicago Cubs in return for to prospects, Eddie Butler and Rollie Lacy, and a player to be named later. His turned out to be one of the best acquisitions of the trading deadline, as over his first 5 starts, he went 4-0, 0.79, including a complete game win over the Cincinnati Reds on August 23rd, giving the Cubs' starting rotation a huge boost. He was named the NL's Pitcher of the Month after finishing August at 4-0, 0.69 in 6 starts and finished the year with a combined record of 9-12, 3.78. He pitched 2 scoreless innings in relief in the Wild Card Game, which the Cubs lost to the Colorado Rockies as it went into extra innings and all hands on deck were needed in a vain attempt to keep the Cubs' season alive.

Hamels returned to the Cubs in 2019 and made 27 starts, pitching 141 2/3 innings. He had relatively few decisions, however, finishing the season at 7-7 in spite of a solid ERA of 3.81 (good for an ERA+ of 117). He also struck out 143 batters. But the Cubs missed the postseason and made some big changes at the end of the year, including bidding adieu to manager Joe Maddon. They also decided not to bring back Hamels, in order to use available money to address other team needs. Now a free agent, he was not able to find a long-term contract, but was signed by the Atlanta Braves on December 4th for one year and $18 million. However, he made just one start with the Braves in the pandemic-shortened 2020 season, for a total of 3 1/3 innings. He had started the season on the injured list with tendinitis in triceps, made his sole appearance on September 16th, and then went right back to the IL with left shoulder fatigue. Given concerns over his health, he was not signed by anyone during the off-season and had to wait until August 4, 2021 for the Los Angeles Dodgers to offer him a one-year contract, although with only $1 million guaranteed. He was sent to the ACL Dodgers to stretch out his arm, but on August 16th, he was moved to the 60-day injured list, ending his season without a single major league appearance.

He married former Survivor contestant Heidi Strobel [1] on December 31, 2006. The couple made the news in December 2017 when they decided to donate the mansion they own in Missouri and the large tract of land surrounding it, valued at $9.75 million, to a charitable organization wishing to turn it into a camp for special needs children.