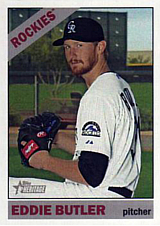 Pitcher Eddie Butler made his major league debut with the Colorado Rockies in 2014.

Butler was picked by the Texas Rangers in the 35th round of the 2009 amateur draft out of high school but proceeded to college. As a freshman, he posted a 6-4, 5.36 record with a .290 opponent average. He improved to 9-2, 4.15 as a sophomore and made second-team All-Big South, finishing third in the conference in wins. He was 1-2 with a 5.22 ERA that summer for the Harwich Mariners in the Cape Cod League. In 2012, the junior right-hander was 7-4 with a 2.20 ERA, setting a Radford school record for ERA. He became the first Radford player to win Big South Pitcher of the Year (which he shared with Aaron Burke). He led the Big South with 95 whiffs and was timed as fast as 97 mph. The Colorado Rockies took him in the supplemental first round (46th overall) of the 2012 amateur draft, the first first-rounder in Radford annals (Phil Leftwich had been the previous high pick, a second-rounder). He was the second Rockie pick that year, following David Dahl; the choice was compensation for the loss of Mark Ellis to free agency.

Butler made his pro debut with the Grand Junction Rockies on June 26, 2012, allowing one run in two innings of relief to pick up the victory in a 12-7 win over the Orem Owlz. He reached the majors within two seasons, making 3 starts to a 1-1, 6.75 record in 2014. He earned his first career win on September 20, allowing one run in six innings in a 5-1 victory over the Arizona Diamondbacks. Following two dismal years, with a combined 5-15 record and 6.47 ERA in 33 games, he was swapped to the Chicago Cubs for minor leaguer James Farris in February 2017, settling down with a 4-3, 3.95 record in 13 games (11 starts). He split 2018 in the Cubs and Texas Rangers organizations, then pitched with the NC Dinos of the KBO in 2019.