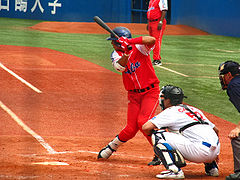 Leonys Martín became a star in his third season in Cuba in 2007-2008, hitting .398/.497/.564, just behind Yoandy Garlobo for the league lead in average. He tied for second in the league in triples (9) and was 6th in steals (13). He failed to make the post-season All-Star team as Alexei Bell, Alfredo Despaigne and Yoandry Urgelles were picked as the outfielders. He made Cuba's roster for the 2009 World Baseball Classic. As a backup outfielder in the Classic, he was 2 for 7 with 3 runs. He had previously played for Cuba in the 2006 World Junior Championship.

Martín defected from Cuba in 2010 and established residence in Mexico, thereby being able to avoid the Major League's First-year player draft. He worked out for the Texas Rangers in extended spring training in Surprise, AZ in April 2011 among rumors that he was about to sign a $15.5 million contract with them. The contract was formally announced on May 4th, as Rangers GM Jon Daniels described the centerfielder as an "impact player" who could be in the major league team's line-up before the end of the year. The Rangers designated pitcher Ramon Aguero for assignment to make room for him on their major league roster. He was assigned to the AA Frisco Rough Riders at first, making his debut as the team's starting centerfielder on May 12th; another top prospect, Engel Beltre, was moved away from CF to a corner outfield spot to make room for Mart­ín. In his debut, he went 3-for-5 in a 10-7 victory over the Corpus Christi Hooks, including a pair of doubles. He was then moved to the AAA Round Rock Express after a month, and also made a short stay with the AZL Rangers while rehabbing for an injury. For the year, Martín hit .295/.362/.421 in 73 minor league games, with 4 homers, 53 runs scored and 19 stolen bases.

It took Martin less than a year to reach the major leagues. On August 30th, he was called up to the majors when the Rangers placed Nelson Cruz on the disabled list with a strained hamstring, although for the time being Endy Chavez, like Martín a fast lefthanded batter able to play all outfield positions, was slated to fill in as the starter for the injured Cruz. He made his debut against the Boston Red Sox on September 2nd and singled off Tim Wakefield in his first at-bat as a pinch-hitter for Josh Hamilton in the 8th inning. He then took over for Hamilton in center field. He went 3 for 8 in 8 games in his first taste of the majors, then returned to Round Rock to begin the 2012 season. He was hitting .344 with 9 doubles, 5 homers and 22 RBI in 31 games when he was called-up to Texas on June 15th after Hamilton was temporarily laid down with a stomach virus. He played 24 games for Texas, hitting only .174, although he did rack up 5 doubles and 2 triples in 46 at-bats. At Round Rock, he only played 55 games in all, hitting a sparkling .359/.422/.610 with 18 doubles and 12 homers.

In spring training of 2013, Mart­ín beat out Julio Borbon for an outfield job, and began the season in a platoon with right-handed batter Craig Gentry. He moved to right field and to the lead-off spot when RF Nelson Cruz was suspended for the remainder of the season on August 5th for his role in the Biogenesis scandal. Martin proved to be an inspired choice for the role, as he stole 3 bases in back-to-back games on August 6-7th, becoming the first player in team history to do so. That came in the midst of a streak of 9 wins in 10 games that moved Texas back into a first-place tie with the Oakland Athletics. Martin ended the year with a .260 average, 66 runs scored, 8 homers, 49 RBIs and 36 stolen bases in 147 games but the Rangers failed to make the postseason. The team then collapsed under the weight of various injuries in 2014, but Leonys was one of the few players to take his spot every day, playing 155 games and hitting .274 with 68 runs, 7 homers, 40 RBIs and 31 steals. The numbers looked superficially good, but as in the previous season, his lack of on-base skills and limited power (he hit only 13 doubles in 2014) led to a below-average OPS+ of 92. Texas bounced back in 2015, but Leonys lost his starting job to rookie Delino DeShields Jr. as he hit only .219 in 95 games and his OPS+ fell all the way to 55. He was not used in the postseason and on November 16th, he was traded to the Seattle Mariners, along with P Anthony Bass, in return for P Tom Wilhelmsen, OF James Jones, and a player to be named (Patrick Kivlehan).

Martin played 143 games in his first season with the Mariners in 2016, hitting .247 with 15 homers and 47 RBIs. He also scored 72 runs and stole 24 bases in 30 attempts. However, he fell off a cliff in 2017, as he hit only .174 in 34 games with Seattle and spent the bulk of the year with the AAA Tacoma Rainiers, where he hit .306 with 11 homers and 39 RBIs in 88 games. On August 31st, he was sent to the Chicago Cubs for future considerations. The Cubs apparently wanted an extra outfielder for the pennant race, but their first use of Leonys was as a pitcher, as on September 4th, he came in to get the last two outs in a blowout loss to the Pittsburgh Pirates. Rookie Dillon Maples had started the bottom of the 8th on the mound, but his outing was disastrous as he allowed 3 hits and 2 walks while retiring only one batter; Leonys replaced him but did not do much better, allowing a single to Andrew McCutchen that scored a run, making the score 9-0, a ground out to Josh Bell that resulted in another run, and a two-run homer to David Freese, increasing Chicago's lead to 12-0. After Jordan Luplow singled, he got Sean Rodriguez to line out to CF Jon Jay to finally end the inning. It was not his first professional pitching appearance, as he had pitched once for Villa Clara back in 2005-06, retiring the only batter he had faced, and he did manage to hit 91 mph on the radar gun. Used in the more conventional role of pinch-runner on September 6th, he scored the only run in a 1-0 Cubs win over the Pirates on a 9th-inning triple by Alex Avila. He hit .154 in 15 games with the Cubs and also went 0 for 3 as a pinch-hitter in the first postseason appearances of his career. After the season, he signed a one-year deal as a free agent with the Detroit Tigers.

On April 25, 2018, Martin had an at-bat he was unlikely to forget as he first fouled off a ball which bounced up and hit him directly in the groin. After taking a few minutes to regain his composure after the rather painful hit, he then managed to turn on a 95 mph fastball from Jameson Taillon of the Pittsburgh Pirates for a solo home run. He played 78 games for Detroit and hit .251 with 9 homers and 29 RBIs as the starting centerfielder over the first half. On July 31st, he was traded to the Cleveland Indians along with minor leaguer Kyle Dowdy in return for another minor leaguer, Willi Castro. Only a few days later was admitted to a hospital in Cleveland with an "serious but undisclosed medical condition". It was apparently an infection caused by toxins that infiltrated his bloodstream and attacked his internal organs, and doctors described it as "life-threatening". The infection was contained, but he had been seriously weakened and faced a lengthy recovery. On August 22nd, the Indians announced that he would miss the remainder of the season as a result. He finished the year at .255 in 84 games, with 11 homers and 33 RBIs. It was good for an OPS+ of 101, the first time he had topped 100 since his 8-game first cup of coffee in the majors back in 2011. He returned to action in 2019 but struggled with the bat, hitting just .199 in 65 games, with 9 homers and 19 RBIs. He was released by the Indians on June 27th, and on July 13th, he signed with the Chiba Lotte Marines of Japan's Pacific League.

Like many other Cuban players who defected around the same time, Martin had to deal with some unsavory characters to leave the island. The person who arranged his defection, Bart Hernandez, was indicted in February 2016 on federal human smuggling and conspiracy charges for his role in assisting Martin in his quest to leave the island. Hernandez's involvement in the defections of Jose Abreu and Dalier Hinojosa was also cited in the indictment. He faced a jail sentence of up to twenty years for his role. While Hernandez was also working legitimately as a player agent, he was an associate of criminal figures such as Eliezer Lazo and Joel Martinez Hernandez. Lazo was sentenced to fourteen years for human trafficking and was also serving a sentence for Medicare fraud in which Martinez Hernandez was implicated as well. The two had held Martin and his family hostage to extort a large sum of money from him while he was attempting to negotiate a major league contract, prompting to file suit a few years later.