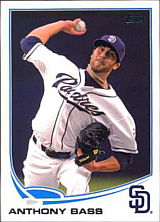 Anthony Bass was drafted by the San Diego Padres in the 5th round of the 2008 amateur draft. He was signed by scout Jeff Stewart and made his pro debut that summer.

Anthony debuted with the 2011 San Diego Padres, posting a sparkling 1.68 ERA in 27 games (3 starts). The Pads gave him 15 starts the next year as his ERA ballooned to 4.73 and he was flipped to the Houston Astros on December 12, 2013 for Patrick Schuster, becoming a free agent following 21 games in 2014. After spending the 2015 season with the Texas Rangers and putting up a 4.50 ERA in 33 decision-less games, he was traded to the Seattle Mariners on November 16, as part of the deal that sent outfielder Leonys Martin to Texas in return for James Jones, Tom Wilhelmsen and prospect Patrick Kivlehan. He did not put on a Mariners' uniform, as the M's gave him his release on January 7, 2016 so he could be free to pursue an opportunity to play in Japan. In 2019, after stops in Japan, back in Texas and with the Chicago Cubs, Bass finally suited up with Seattle, making a career best 44 appearances.

He was claimed off waivers by the Toronto Blue Jays following the 2019 season and through circumstances, he became the team's principal closer in 2020, after Ken Giles went down with an arm injury in his second appearance of the year. As Giles' set-up man, Bass was asked to step into his role and did well, collecting 7 saves and striking out 21 batters in 25 2/3 innings. He was not the Jays' sole pitcher to receive opportunities to save games, as Rafael Dolis and A.J. Cole also were used in these situations, manager Charlie Montoyo being careful not to overwork anyone, and sometimes deciding to use Bass earlier in the game depending on which part of the batting order was coming up. His contribution was a major factor in the Blue Jays making it to the postseason that year. He also made his postseason debut that year, pitching a scoreless inning in relief against the Tampa Bay Rays in the Wild Card Series. He was a free agent again after the season and turned his solid 2020 season into a two-year contract with the Miami Marlins.