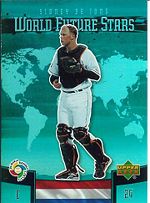 Sidney de Jong was one of the top players in Hoofdklasse in the first decade of the 21st Century and played in the Olympics and World Baseball Classic.

In the 2001 European Championship, de Jong went 2 for 5 with a double and 3 walks as the backup catcher to Johnny Balentina on the Gold medal winners.

After playing college baseball in the US, Sidney returned to the Netherlands in 2002 to play for Honkbal Club Kinheim. He hit .357, second to Dirk van 't Klooster, scored 37 runs (third in Hoofdklasse), had 60 hits (third), banged 11 doubles (tying Evert-Jan 't Hoen for fifth), hit six homers (tied for second) and drove in 44 (leading the loop), earning MVP honors. In the 2002 Intercontinental Cup, he was 1 for 6 with 3 walks.

In the 2007 European Championship, de Jong batted .333/.429/.417 to help the Dutch team win the Gold and qualify for the 2008 Olympics. He hit .348/~.400/.652 in the 2007 World Port Tournament. In the 2007 Baseball World Cup, de Jong was the All-Star catcher, hitting .314/.359/.429 and throwing out three of four attempted base-stealers. de Jong played well in big games, scoring one of two runs in the Netherlands' upset of the Cuban national team (the first European win ever against Cuba in a Baseball World Cup) and starting the 11th-inning rally to beat the host Taiwan national team in the quarterfinals.

De Jong was the top hitter in the 2008 Hoofdklasse season. He hit .360/.489/.581 with 35 walks and 38 runs in 40 games. He was second in average (behind Mark Duursma), first in slugging (.059 ahead of runner-up Eugène Kingsale), tied for second in OBP (even with Kingsale, trailing Raily Legito), first in OPS, tied for the most home runs (6), first in runs, 10th in RBI (28), tied for 8th in doubles (10, even with Bryan Engelhardt, René Cremer and Mark Duursma), tied for second in total bases (79, 2 behind leader Bas de Jong), second in walks (1 behind Legito) and tied for 7th in hits (49, even with Wesley Connor). Sidney then hit .385/.550/.923 with 5 RBI in five games in the playoffs as Amsterdam upset DOOR Neptunus. In game one of the 2008 Holland Series, Sidney was injured in the first inning when Engelhardt came home on a hit by Roel Koolen. Amsterdam won their first title in 21 years despite the absence of their star batter.

De Jong was back in the field for the 2009 World Baseball Classic, going 5 for 10 with a double as the best Dutch hitter on a team which included three former major leaguers (Gene Kingsale, Yurendell de Caster and Randall Simon). He split catching duties with Kenley Jansen and also played some DH, batting cleanup on occasion. Sidney got his big hit in a make-or-break round one game against the Dominican national team. Down 1-0 in the bottom of the 12th, he pinch-hit for Jansen and doubled off Carlos Marmol. He scored the tying run on a hit by Kingsale as the Dutch went on to a 2-1 upset to eliminate the Dominicans.

De Jong was surprisingly Amsterdam's worst regular in the 2009 European Cup's Nettuno phase, going 2 for 13. He did draw 4 walks and score 4 runs and Amsterdam advanced to the Final Four. In the Final Four, de Jong was 3 for 7 with a double, walk and RBI (driving in their only run) as Amsterdam went 0-2.

He hit .316/.409/.500 in the 2009 World Port Tournament and threw out an amazing six of nine attempted base-stealers. He tied Leonys Martín and Ariel Borrero for second in the event with four doubles, behind only Eriel Sánchez. He was 5th with 19 total bases, trailing four Cubans. His 12 hits were the most by a non-Cuban. He finished sixth in slugging. In the finale, his 2-run homer off Miguel A. González tied the score at 3 in the 6th before Cuba put it away.

To complete a busy year, he was with the Netherlands for the 2009 Baseball World Cup. He hit .371/.500/.541 with 11 RBI to win the tournament's All-Star catcher nod for the World Cup; among those he beat were Chris Robinson, Ariel Pestano, Noe Munoz, Lucas May, Chris Berset, Kai Gronauer and Yosnel Garcia. He hit a 3-run homer in the bottom of the 8th off Kyung-eun Noh for a 4-2 win over South Korea, had 3 hits and 4 runs in a 8-5 win over Venezuela and took Oswaldo Mairena deep in a win over Nicaragua.

In the 2010 Hoofdklasse, he batted .333/.430/.382 for the Pirates, fielding .996. He was among the league leaders in average (6th, between Legito and Bart Gabriëls), OBP (9th, between Gabriëls and Jeroen Sluijter), hits (48, tied for 4th with Jason Halman, Kenny Berkenbosch and Rafaël Jozefa), walks (48, tied for 4th with Jeffrey Arends) and fielding percentage at C (2nd to Mark Duursma). In the 2010 Holland Series, he was the best hitter for the Pirates, going 5 for 20 with two walks, a double and a homer. His dinger off Diegomar Markwell opened the scoring in the Series. In game 6, he made a crucial mistake, hitting Legito in the back on a pick-off attempt that advanced the runners to let Neptunus stage the decisive rally.

De Jong coached for the Netherlands in the 2014 European Championship.