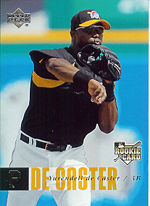 Yurendell de Caster was in his 15th pro season in 2012. He has played for the Dutch national team at times and briefly appeared in the major leagues. In the winter leagues, he challenged a long-standing home run record one year. His father was Eithel de Caster. Known for his versatility, DeCaster has played regularly at first base, second base, third base and the outfield. He was the sixth Antillian in the major leagues.

In 2000, Yurendell was with the Charleston RiverDogs, now at third base. He batted .240/.299/.413 in 69 games. One of his teammates was future Dutch national teammate Chairon Isenia.

De Caster moved up to AA in 2004 with the Altoona Curve and batted .274/.328/.463 for them. He hit .214 with no walks in the 2004 Olympics but slugged .571 with 6 RBI and three homers in 7 games as the Dutch team first baseman. He tied Yoshinobu Takahashi, Kosuke Fukudome and Brett Roneberg for the most homers in the Olympics that year.

In 2005, de Caster batted .280/.346/.453 in his AAA debut with the Indianapolis Indians. His hitting coach that year and for 2006 and 2007 was Hensley Meulens, the first Curacao native in the majors. Manager Trent Jewett said de Caster "was just about as valuable of a player as we had."

He was the 2005-2006 Winter League Player of the Year while playing for Venezuelan League's Caribes de Anzoátegui. He hit .325 with 17 homers and 47 RBI in 209 AB. He led the league in home runs, tied for the lead in stolen bases (11) and was second in both runs and RBI. He came three shy of setting the league home run record, which had been held for 26 years by Bo Diaz. De Caster hit more homers than either Dave Parker or Darryl Strawberry when they had led the league in the past.

In the 2006 World Baseball Classic, he started game one at second base and hit second. He was 0 for 4 with a walk and strikeout in a loss to Puerto Rico. He hit 7th in game two against Cuba and again manned second. He went 0 for 3 with a strikeout. Michael Duursma got the start at 2B in game three as de Caster sat out.

De Caster batted .273/.330/.418 for the 2006 Indianapolis Indians. He made his big league debut with a 3-game stint for the 2006 Pirates after Jose Bautista was placed on the bereavement list to attend the funeral of his grandmother. He debuted in The Show as a pinch-runner for Ryan Doumit. In his first plate appearance about two weeks later, he pinch-hit for Salomon Torres and struck out against Scott Dohmann.

Back in Venezuela, de Caster only hit .232 with five homers for Caribes.

In 2007, the veteran minor league returned to Indianapolis for a third year. He batted .280/.380/.413. For the third straight season, he played at least 10 games at first base (now his primary position), second base, third base and the outfield as a fill-in all over. De Caster hit .483/.605/.655 with 11 runs and 15 RBI for the Dutch team in the 2007 European Championship. His 8 double plays defensively led the tourney. De Caster made the All-Star team at second base for the tournament and the Dutch won the Gold.

De Caster signed with the Tampa Bay Rays in November of 2007 but did not play in their chain, instead being with the Washington Nationals organization in 2008. In Venezuela that winter, he hit .262/.343/.391 with 35 RBI, fifth in the league.

De Caster was back with the Dutch squad for the 2009 World Baseball Classic, hitting .217/.308/.304 as their main third baseman; he hit cleanup at times. He scored the third run in the 3-2 win over the Dominican national team, drawing a walk from Edinson Volquez and scoring on a Hanley Ramirez throwing error. He was then the final batter in their second win over the Dominican Republic to eliminate them; coming up with a 1-1 game and Gene Kingsale on third, de Caster ground into a game-ending error by Willy Aybar at first base. He doubled in Sharlon Schoop with the first Dutch run in their loss to Team USA that eliminated the Cindarella squad in the quarterfinals.