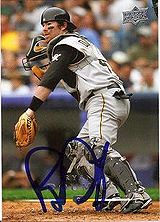 1999 was a year that the Pittsburgh Pirates picked up many catchers, drafting three in their first 10 picks of the 1999 amateur draft and trading for Humberto Cota; while J.R. House made the biggest splash initially, Ryan Doumit was the first one taken, picked in the second round. He was signed by scout James House and made his pro debut that summer.

Doumit's defense over the years has received mixed reviews; at times in the Pirates chain, he was nicknamed "No-mitt" but others said there were no major concerns. It is questionable whether or not this is a result of the Nichols Law Of Catcher Defense as catcher defense is very subjective.

In 2006, Ryan only hit .208/.322/.389 in his first 26 games for Pittsburgh and battled repeated hamstring problems. In the meantime, Paulino got called up and did a fine job and took the catching job from Doumit and Cota. Doumit was moved to first base later in the year. In winter ball for the Venados de Mazatlan, he continued to be used as a 1B and also played a bit in right field, hitting .292/.390/.482. Pittsburgh was considering Doumit as a first base option for the 2007 season before they acquired Adam LaRoche. Doumit made the club out of spring training as one of the final selections, but was sent down after several games when Freddy Sanchez came off the Disabled List. Doumit was to be the regular catcher for Indianapolis. He hit .415/.493/.717 with 15 runs and 20 RBI in 16 games for the Indians. He was leading the International League in average and slugging. Pittsburgh called him back when Humberto Cota went on the DL; Ryan went 4 for 4 in one of his first games back and was soon inserted into the #5 slot in a game. Doumit stayed over .300 for a long stretch while seeing time primarily in right field. He slipped as the year progressed and was batting .277/.344/.478 for a 113 OPS+, second on the team to Xavier Nady, before being sidelined in mid-August with a sprained left wrist. It was a tough blow to the team as Nady had been out with injuries. Carlos Maldonado was called up to take his spot. The day he came off of the DL, he was diagnosed with a high sprain of his right ankle, which sidelined him the rest of the season.

Doumit began 2008 hitting .350/.382/.573 in 29 games and was regularly occupying the clean-up spot while having reclaimed the starting catcher's job. He broke his finger on May 13 on a Phil Dumatrait pitch and was sidelined for almost a month; Raul Chavez filled in while he was out. Doumit returned to hit .318/.357/.501 with 34 doubles as one of the top offensive catchers in the 2008 NL.

Doumit drove in nine runs in his first 12 games in 2009 before again being injured. He hurt his wrist, needed surgery and was expected to miss two months. He struggled on his return, hitting .250/.299/.414 for the season, just a 89 OPS+ after 127 the prior year. He was the only player to begin the year as a starting position player with Pittsburgh who was not traded by year's end.

In April 2010, Ryan hit a game-winning grand slam off Trevor Hoffman one day, then a game-tying homer in the 9th the next. Only one other player, Dante Bichette back in 1996, had gone deep off Hoffman twice in a season. He played 124 games for the Bucs that season, hitting .251/.331/.406 with 13 homers and 45 RBIs. However, he was plagued by injuries in 2011, limiting his season to 77 games. He hit quite well when he was healthy, however, batting .303/.353/.477 with 12 doubles and 8 homers and putting up an OPS+ of 131. Defense remained a concern. He became a free agent after the season and signed with the Minnesota Twins.

With the Twins, Joe Mauer was the starting catcher, although the team brass wanted to limit the number of games he played behind the plate, to preserve his long-term health. They wanted a back-up who could share DH duties with Mauer in addition to catching, and were not really looking for defensive prowess, so Doumit was an excellent fit for their needs. He had a couple of productive seasons with the Twins. In 2012, he played 134 games, hitting .275/.320/.461 with 34 doubles, 18 homers and 75 RBIs. In 2013, he played 135 times, hitting .247/.314/.396, with 28 doubles and 14 homers. He caught 59 games the first year and 40 the second, getting just under 50 games as a DH both years, and then filling in in the outfield to keep his bat in the line-up. However, after the second season, the Twins made some big changes, deciding to move Mauer to first base full time, the spot having been vacated when Justin Morneau was traded late in the 2013 season. They now wanted a strong defensive catcher and wanted to play some younger men at Doumit's other spots, making the 32-year-old redundant. On December 18th, he was traded to the Atlanta Braves for pitching prospect Sean Gilmartin. The Braves had just replaced long-time starting catcher Brian McCann with young Evan Gattis and saw Doumit as an excellent back-up for him. He struggled for the 2014 Braves, hitting .197/.235/.318 to end his MLB career. He had batted .264/.324/.412 with 104 homers and a 103 OPS+ in 980 games in the majors.

He was assistant coach at Big Bend Community College starting in 2017, the last year his father Pete Doumit (who had been his high school coach) was the head coach.