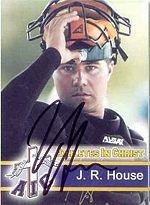 House was drafted by the Pittsburgh Pirates in the 5th round of the 1999 amateur draft. He was signed by scout Rob Sidwell and made his pro debut that summer. A very good hitter in the minors, House was plagued by many injuries. In 2001 he was twice on the disabled list with bruised ribs. A year later, he had surgery three times - for an abdominal hernia, a torn muscle and finally Tommy John surgery. The last surgery cost him most of the 2003 season. Additionally, he missed a month in 2000 due to mononucleosis. He was limited to 35 games in 2002 and 41 in 2003.

When healthy, House hit over .300 in Rookie League and short-season class A in 1999. The next year, he batted .348 with 23 homers, splitting the South Atlantic League MVP with Josh Hamilton. After barely playing for two years, House hit .288/.344/.502 at AAA - his career minor league line was .304/.371/.502. House was not deemed a prospect any more by the Pittsburgh Pirates, who had high hopes for other young catchers Ryan Doumit, Humberto Cota, Ronny Paulino and Neil Walker. He barely played in his second cup of coffee in the majors. He had rotator cuff surgery on his previously injured right shoulder in 2004 and two weeks later was released by the Pirates.

After his baseball career apparently ended, House enrolled in West Virginia University and served as their third-string quarterback. House spent one year in this role. His 2005 WVU stats: passing, 2 for 4, 38 yards, no TDs or interceptions. 2 rushes for 16 yards, longest 13, no TDs. In the last 30 years, Josh Booty is believed to be the only other player to have played college football after MLB.

After the season, the free agent signed a minor league deal with the Baltimore Orioles.

His next door neighbor in Florida was Tom Wiedenbauer, field coordinator of Houston Astros minor league operations, who was instrumental in getting House to sign with the Astros. See House Glad to be Back Home.

House was later hitting coach of the Missoula Osprey in 2012 and Hillsboro Hops in 2013 in the Arizona Diamondbacks organization. He then became a manager with Hillsboro in 2014.

In 2019, he became third base and catching coach for the Cincinnati Reds.