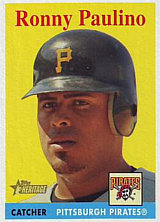 In 2000, the young catcher spent his first full season with the Hickory Crawdads and posted a .289/.354/.415 line as a part-timer behind MVP J.R. House; Paulino caught when House was at DH. The next year, 2001, he topped 100 games played for the first time as a member of the Lynchburg Hillcats. He batted .290/.353/.392 and finished fifth in the Carolina League in average. He led the league's catchers in both fielding percentage (.994) and passed balls (20), an odd combination.

Entering 2002, Paulino was behind sure starter Jason Kendall and top prospects House and Humberto Cota in the Bucco system and hit .262/.321/.412 as he was stuck at Lynchburg for a second season. Meanwhile, Ryan Doumit was lighting up A ball with Hickory and would soon bypass Paulino among the club's prospects behind the plate. Ron did lead the Carolina League in in putouts (854), assists (88) and errors (18) that year and made the league All-Star team. The Kansas City Royals took him in the 2002 Rule V Draft but returned him to Pittsburgh before the start of the 2003 season. He played for the Dominican national team in the 2002 Central American and Caribbean Games, winning Bronze. In the 2002 Intercontinental Cup, Paulino batted .226/.294/.548 while splitting catching duties for the Dominican team with Pascual Matos. He tied tournament MVP Bárbaro Cañizares for fifth place in home runs (3) and the Dominican Republic won its first Medal in an Intercontinental Cup in 21 years.

In 2003, the Dominican backstop hit just .253/.308/.309 for Lynchburg and .226/.283/.390 for the Altoona Curve and saw yet another catching prospect join the mix with Chris Shelton's breakthrough year. 2004 marked a rebound for Paulino. With Shelton foolishly lost in the 2003 Rule V Draft, he maintained his hold at Altoona and hit .285/.345/.482 with 15 homers, as his power began to develop at age 23. He set a team record by reaching base in 33 straight games; it would be tied three years later by Steve Pearce. Ronny made the Eastern League All-Star team.

By 2005, House and Kendall were also gone, leaving Paulino only behind Cota, Doumit and newly signed Benito Santiago on the organizational depth chart. When Santiago quit the team early in the year, Paulino moved up another notch. He hit .292/.350/.435 for Altoona and .315/.372/.538 after being called up to AAA to take Doumit's place there. Overall, he homered 19 times. He was selected to play for the Dominican Republic in the 2006 World Baseball Classic and performed well, going 2 for 6 with a double and three walks as one of three Dominican backstops in the tournament. He made his debut with Pittsburgh late that season, going 2-for-4 in 2 games.

When Cota struggled early in 2006 and the Pirates catchers battled injuries, Paulino was at .241/.313/.345 in 8 games with Indianapolis when he got called up. The Pirates staff was struggling in terms of ERA and put together a string of good games when Ronny first got called up, earning him a reputation as a good play-caller when it may have been revision to norms. Paulino showed a fine bat as well, hitting over .300 through mid-July and being second to Dan Uggla among National League rookies in batting average. He finished at .310/.360/.394 and became the second catcher since 1969 to hit .310 or better as a rookie.

Paulino hit .490/.490/.837 with a team-leading 15 RBI in 17 games in Grapefruit League play entering the final preseason game in 2012, when he added two more RBI though his average fell to .481. He was the 5th hitter on Opening Day with Freddy Sanchez starting the year injured and Jason Bay moving up to the #3 slot in the order. Paulino started the year slowly and was dropped in the order. He finished with a .263/.314/.398 batting line; his power was up (25 doubles, 11 homers) but the lower average and OBP dropped his OPS+ to 83.

Paulino's playing time fell further in 2008 when Doumit returned to catching from the outfield. Even when Doumit was hurt, Paulino did not start regularly, with journeyan Raul Chavez taking many starts. When Doumit returned, Chavez was left in the backup role and Paulino was sent down to AAA. He came up in September but barely saw any action then. He hit .212/.277/.305 in 40 games for the Pirates and .306/.373/.550 in 30 games for the Indianapolis Indians. In winter ball, he shone, batting .310/.468/.707 with 6 homers and 18 RBI in 19 games for the Tigres del Licey. That drew the interest of several teams. Pittsburgh sent him to the Philadelphia Phillies for Jason Jaramillo on December 10th.

Paulino struggled in spring training with Philadelphia in 2009 and was dealt to the Florida Marlins for Jack Taschner; with Florida, he became the backup catcher to John Baker. On August 20, 2010, he was suspended for 50 games for violating Major League Baseball's PED policy. He claimed that he had taken a dietary supplement that, unbeknownst to him, contained a banned suspense. With the season nearing its end, the suspension extended into early 2011. He was suspended once again for 100 games in February, 2014, for detection of a banned performance enhancer. By then, his major league career was over.

Paulino went 5-for-7 with the game-winning RBI in the 14th inning in his first game with the New York Mets on May 1, 2011. A Sunday night affair on ESPN, it was also notable for being the night Osama bin Laden had been killed.

After his major & minor league career ended, Paulino played in the Mexican League in 2015-2016. He continued to play in the Dominican League with the Leones del Escogido through the 2019/2020 season.

Shortly after retiring, Paulino began his coaching career. He was the hitting coach for the 2020/2021 Estrellas Orientales (Dominican League) and the 2021 Toros de Tijuana (Mexican League). Paulino started the 2021/2022 season as the hitting coach for Escogido but took over as manager when Rodney Linares was fired. In 2022 Paulino became a hitting coach with the ACL Dodgers. He returned to Estrellas in 2022/2023 as their hitting coach. However, Paulino was fired on November 15th and replaced by Pedro Lopez - the same Pedro Lopez who had just been fired the previous day as manager of Escogido. Such is life in the winter leagues!