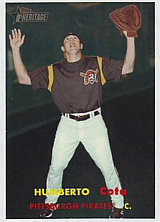 Humberto Cota was a big league catcher in seven seasons, entirely with the Pittsburgh Pirates.

Originally signing as an undrafted free agent by the Atlanta Braves in 1995, Cota was released early in 1997 and signed with the Tampa Bay Devil Rays organization. He hit .241/.327/.346 for the GCL Devil Rays and was 2-for-9 for the Hudson Valley Renegades. In 1998, Cota caught fire for the Princeton Devil Rays, batting .310/~.387/.580 with 15 homers and 61 RBI in 67 games. He was two homers behind Appalachian League leader Manny Lutz and made the league All-Star team at catcher; Baseball America picked him the 4th best prospect in the league, right behind C.C. Sabathia. Cota began 1999 with the Charleston RiverDogs (.280/~.320/.429 in 85 games) and then was traded, with Joe Oliver, to the Pittsburgh Pirates for Jose Guillen and Jeff Sparks. He hit .271/~.370/.429 for the Hickory Crawdads in 37 games.

Humberto was Kendall's backup on the 2004 Bucs, hitting .227/.271/.500 with five homers in 66 at bats. His primary role was serving as Oliver Perez's personal catcher, a role he held through to 2006. When Kendall was traded the next year, Cota became the backup to newly-signed veteran Benito Santiago. Santiago quickly threw a hissy fit and left the team, providing an opportunity for Cota, who hit .242/.285/.387 in a career best 94 games. By year's end, the better hitting Ryan Doumit had taken over as the regular catcher. In 2006, Cota was the backup to first Doumit and then Ronny Paulino. He only hit .190/.248/.200 in 100 at bats and had the lowest average of any major leaguer with 100 at bats. While some expected Cota not to return in 2007, he beat Einar Diaz and Carlos Maldonado for the role of backup to Paulino. He had only played five games and hit .289/.389/.357 in 14 at bats when he accepted a minor league assignment to the Indianapolis Indians, feeling the squeeze of the emergence of both of his competitors from 2006. It was the end of his big league career.

Cota wore number 11 during his time in the bigs, becoming the last player to wear the number. A long overdue retirement of the digits occurred in July 2007 to honor Hall of Fame outfielder Paul Waner. Cota soldiered on in the minors, first hitting .284/.330/.347 in 30 games for Indianapolis before season-ending surgery on his left shoulder. In May 2008, he was handed a 50-game suspension for testing positive for banned performance-enhancing substances. In the 2013 World Baseball Classic, he was 1 for 4 for the Mexican national team, splitting catching with Sebastián Valle and Jose Felix. He continued to play through the 2017 season, finishing his career in the Mexican League.