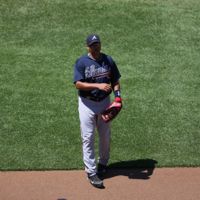 Bárbaro Cañizares played for the Atlanta Braves in 2009. A member for one tournament of the Cuban national team, he played 10 years in the Cuban leagues. He won batting titles in Nicaragua and in two AAA leagues and a home run crown in Mexico.

Cañizares hit .348 with 13 homers in the 2000-2001 Serie Nacional. He was 0 for 11 in the 2001 World Port Tournament for the winning Cuban team. Moving to the Industriales the next year, he drove in 61 runs, second on the club to Kendry Morales. Cañizares tied Frederich Cepeda and Ariel Borrero for the Super Liga RBI lead in 2002 with 19. He was added to the Cuban national team for the 2002 Intercontinental Cup and had an excellent tournament, hitting .412/.524/.794 with 4 doubles, 3 homers, 7 walks, 9 runs and 11 RBI in 10 games at DH. He was 8th in the tournament in average, tied Ronny Paulino for 6th in home runs, tied Luis Iglesias for second in hits behind Michel Enriquez and tied Cepeda, Jhensy Sandoval and Feng-An Tsai for third in RBI (11), trailing Yobal Dueñas and Morales. In the Gold Medal game, he doubled twice and scored a run in Cuba's 2-1 win over South Korea. He was named to the tourney All-Star Team at DH and also won MVP honors.

Cañizares hit .318 with 66 walks in the 2002-2003 Serie Nacional for the title-winning Industriales. He was suspended on the eve of the 2003 Baseball World Cup and left off the Cuban national team roster. When he tried to defeat the next year, he was banned from Cuban baseball. He defected in February of 2004, his 4th attempt to do so. He then spent a year trying to establish citizenship abroad.

Cañizares signed with the Indios de Bóer of the Nicaraguan League for 2005-2006 and led the league in average (.352), hits (68) and runs (42) and tied for the most doubles (13). He was named to the League All-Star team as an outfielder. The Atlanta Braves signed him based on his performance. Cañizares, whose birthdate had been listed as November 21, 1974 for years, suddenly had a birthdate of November 21, 1979, lying about his age like many Cuban defectors. Even though this did not jibe with someone who had played 10 seasons prior to 2004 (meaning he would have begun playing at age 14) or published materials, the birthdate is still listed in many US sources such as milb.com as of January 2008.

Bárbaro debuted in The Show as a cleanup man, going 1 for 4. He struck out against the Pirates' Paul Maholm in his first at-bat and got his first major league hit in the sixth, a single off Maholm. After starting four games and going 4 for 17 (.235) with a double, he was sent back down on June 16th when Casey Kotchman came off the disabled list. He played one more game during the season, finishing 4 for 21 (.190) and would not make it back to the majors despite continued strong performances in AAA and winter ball. He hit cleanup and played 1B for the World team in the 2009 Futures Game, singling off Chris Tillman to score Alcides Escobar in the first with the game's first run. He faced Brian Matusz in the third and hit into a double play, but Tyson Gillies scored. In the bottom of the inning, he was replaced in the lineup by Dayán Viciedo while Alex Liddi moved from 3B to 1B to take his spot on the field. He also appeared in the 2009 AAA All-Star Game, hitting 5th for the IL All-Stars in a 6-5 win. He was retired by Bud Norris in the second, singled off Kevin Pucetas in the 4th and grounded out against Charlie Haeger in the 6th and struck out facing Jay Marshall in the 8th. For the year with Gwinnett, he hit .294/.366/.435 with 31 doubles and 79 RBI. He tied Neil Walker and David Winfree for 7th in the 2009 IL in doubles, was 4th in RBI (after Shelley Duncan, Andy Tracy and Juan Miranda) and was named the IL All-Star DH. Among Braves farmhands, he was second to fellow Cuban Donell Linares in doubles and 4th in RBI. He hit .286/.395/.371 in 11 games for the 2009-2010 Tiburones de La Guaira.

He produced at a .341/.403/.504 with 28 doubles and 77 RBI for Gwinnett in 2010. He batted for Bubba Bell in the 2010 AAA All-Star Game and singled off Fernando Salas but did not stay in. He led the 2010 International League in average, 22 points ahead of Jose Constanza and Freddie Freeman. He was also second to Dan Johnson in OBP, 6th in slugging (between Jesus Montero and Michael Aubrey), 8th in RBI (between Wladimir Balentien and Robert Andino) and 3rd in OPS (behind Johnson and Chris Richard). He led Braves farmhands in average and OBP and was second in slugging to Freeman and third in RBI behind Freeman and Mauro Gómez. He became the first player to be named IL All-Star DH in consecutive seasons.

With the Yaquis de Obregon that winter, he hit .320/.421/.533 with 46 RBI in 56 games. He was 6th in the Mexican Pacific League in average (between Ramon Orantes and Yurendell de Caster), 4th in OBP (behind Tike Redman, Justin Christian and Erubiel Durazo), 7th in slugging (between de Caster and Durazo), 6th in OPS (between Durazo and Rubén Rivera), tied for 8th in homers (12) and 7th in RBI. He was only 6 for 18 with three walks, two runs and three RBI in the 2011 Caribbean Series. He was named the Series All-Star DH. He remained in Mexico for the summer, with the Guerreros de Oaxaca. He produced at a .396/.499/.653 clip with 20 home runs, 61 walks to 41 strikeouts, 77 runs and 76 RBI in 83 games. He led the Mexican League in average (6 points over Luis Terrero) and OBP (14 points ahead of Terrero), 6th in slugging (between Rivera and Mendy López) and third in OPS (between Terrero and Edgar Quintero). He had the best batting average of any minor leaguer with 300+ at-bats that summer.

Bárbaro returned to the Obregon for the 2011-12 Mexican Pacific League season. He broke the record for most home runs in the history of the franchise with 20; the previous record was held by Jim Lemon who had hit 19 in the 1955-56 season. He finished the year among the league leaders in almost everything, hitting .312/.426/.607. He was 7th in average (between Eduardo Arredondo and Oswaldo Morejón), tied Doug Clark for second in runs (46, one behind Chris Roberson), was third in hits (73, behind Luis Cruz and Sandy Madera), led in home runs (two over Jorge Vázquez), was second in RBI (55, 5 behind Vázquez), was second with 44 walks (trailing Madera), was third in OBP (behind Kraig Binick and Madera), was 4th in slugging (after Madera, Cruz and Vázquez) and was second in OPS (37 points shy of Madera). He struggled in the 2012 Caribbean Series (2 for 16, BB, 3 R, RBI).

In 2012-2013, Cañizares hit .324/.430/.602 for Yaquis with 45 runs, 66 RBI and 17 home runs in 67 contests. He was 7th in the Mexican Pacific League in average (between Jon Weber and Marlon Byrd), led in OBP (5 points ahead of Zelous Wheeler), was third in slugging (after Chris Colabello and Jason Botts), was third in OPS (behind Botts and Colabello), tied Clark and Jesse Gutierrez for 6th in runs, tied Botts for third in doubles, tied for third in homers (behind Gutierrez and Cory Aldridge), led in RBI (13 ahead of Japhet Amador) and tied Aldridge and Soto for the lead with 42 walks. He was named league MVP. He hit .318/.483/.591 in the 2013 Caribbean Series with 6 RBI to help the Yaquis win it all; he was named the All-Star DH for the Series for the second time. He led the Series in OBP (69 points over Clark), slugging (3 points ahead of Alberto Rosario), OPS (74 points over Rosario), tied Byrd and Miguel Tejada for second in RBI (one behind Ricardo Nanita), was second in doubles (3, one shy of Byrd) and tied Hanley Ramirez for second with six walks.

In the 2012 World Baseball Classic Qualifiers, he was 5 for 21 with two walks, two RBI and Spain's lone homer (off Thomas Langloys), a decade after he had played for Cuba on the international stage. He was one of a few Cuban defectors on the "Spanish national team". Spain advanced to the 2013 World Baseball Classic. In that event, he was 3 for 9 with three walks and a homer; only fellow Cuban Yunesky Sánchez hit better for Spain. He hit a two-run homer off Venezuela's Ramon Ramirez to put Spain up, 3-0, but Venezuela rallied to win.

He signed with the SoftBank Hawks in Japan for 2014 but saw limited action (4 for 13, 3 2B). His first at-bat came against Yudai Ono; pinch-hitting for Tadashi Settsu, he singled.