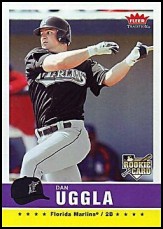 Dan Uggla has hit over 200 home runs in the majors and made multiple All-Star teams.

He had a breakthrough year as a college junior, hitting .379/.498/.790 for the University of Memphis in 2001. He was third in Conference USA in average behind Kevin Youkilis and Andy Cannizaro, tied Youkilis for second in the conference with 18 homers (three behind Jake Gautreau) and hit 28 doubles, second behind Cannizaro. Named to the All-Conference Team and several All-American teams, he was tied for 10th in NCAA Division I in slugging. The Arizona Diamondbacks drafted the second baseman in the 11th round of the 2001 amateur draft. He was signed by scout Scott Jaster and assigned to the Yakima Bears, where he batted .277/.341/.406 and led Northwest League second basemen with 41 double plays. 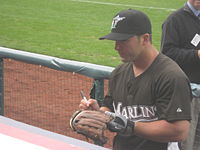 Uggla hit his 84th home run in the majors on July 30, 2008, giving him a new record for a major league second baseman in his first three seasons; Joe Gordon had held the mark for 68 years. He was part of the first infield to have each starter hit 25 or more home runs, as 1B Mike Jacobs, SS Hanley Ramírez and 3B Jorge Cantú all did so in addition to Dan. He made the All-Star team for a second time, but his performance was one to forget, as he committed a record-tying three errors in the late innings as the National League lost a tightly-fought extra-inning context. On September 28, Dan hit the last home run at Shea Stadium during a 4-2 Marlins' win over the New York Mets. He ended the season with excellent offensive numbers: 32 home runs, a batting line of .260/.360/.514, 37 doubles, 97 runs and 92 RBI.

On September 13, 2010, he took David Herndon deep to become the first second baseman in major league history to go deep 30 times in four different seasons. He finished the year with a batting line of .287/.369/.508, with 33 homers and 105 RBI, his first season to break the magic 100 mark. After the season, the Marlins traded him to the Atlanta Braves as they figured that it would be too expensive to re-sign him. He left the Marlins as the franchise's all-time home run leader with 154, a distinction he would hold until the 2015 season, when passed by Giancarlo Stanton. The Braves gave him a large multi-year contract, worth $62 million over five years, and then probably had immediate second thoughts when he started the 2011 season stone-cold. On July 4th, he was hitting a mere .173 with a .241 OBP when he embarked on what was one of the most improbable hitting streaks of all time. He got a hit in every remaining game in July, to move his average slightly above .200, then continued through the first 10 days of August. When he went 3 for 5 on August 10th, his streak reached 31 games, the longest in the major leagues that year, and tying him for the longest in Atlanta Braves history - Rico Carty had had a 31-game streak in 1970. In spite of his recent batting heroics, he was still only hitting .224 at that point, with over 100 strikeouts. For one day, he and teammate Freddie Freeman had both had active 20+ game hitting streaks on the go; it was the first time this had happened since Mickey Rivers and Al Oliver of the Texas Rangers in 1980. Uggla's streak ended at 33 games; on August 14th, Chicago Cubs 2B Darwin Barney robbed him of a sure hit with a spectacular diving, back-to-the-plate catch in short right field as he went 0 for 3 with a sacrifice fly. Not surprisingly, he was named the National League's Player of the Month for August; during the month, he hit .340, collecting 33 hits. He finished the year with a .233 batting average, but with 36 homers, 88 runs and 82 RBI, good for an OPS+ of 109 when all was said and done.

He continued to struggle with a low batting average in 2012, falling to the Mendoza Line after a solid start. In the 2012 All-Star Game, he started at second base and hit 8th for the NL. In the top of the first, he singled in Pablo Sandoval for the NL's 5th run off Justin Verlander. He later flew out against Matt Harrison in the 4th and against Jered Weaver in the 5th. In the bottom of the 5th, he was replaced by Jose Altuve. However, he was also one of the National League leaders in walks, meaning that his OBP was acceptable in spite of his lower number of hits. Still, his batting average from June 6 to September 3rd was only .152, with a .276 slugging percentage and manager Fredi Gonzalez became concerned, especially with the Braves in another tight battle for a postseason spot. Thus, on September 3rd, Gonzalez announced that Uggla would no longer be the starter at second base. Martin Prado moved back from left field to his previous position, with a platoon of Reed Johnson and Jose Constanza taking over the vacated outfield spot. That did not last long however, as he was back in the starting line-up two days later and remained there till the end of the season, improving his batting average slightly as he finished at .220/.348/.384 in 154 games, with 19 homers and 78 RBI. He was the starter at second base in the Wild Card Game against the St. Louis Cardinals on October 5th, but went 0 for 4 with a walk and a run scored in the Braves' 6-3 loss. It was the first postseason appearance of his career. He finished among the league leaders in walks (94, tied for first with Joey Votto), strikeouts (168, 4th, between Rickie Weeks and Drew Stubbs), putouts at 2B (258, 3rd), assists at 2B (471, 2nd, 16 behind Aaron Hill), errors at 2B (12, tied for 3rd with Logan Forsythe) and double plays at 2B (103, first).

Uggla was bothered by vision issues for most of 2013, as he had difficulty adjusting to contact lenses. While his power was good - he hit his 20th homer of the season on July 24th, he struggled to hit for average. He was hitting only .186 and leading the NL with 146 strikeouts on August 13th when the Braves announced that he would go on the disabled list in order to undergo laser eye surgery. With the Braves nursing a comfortable lead in the NL East, it was felt this would give Dan time to recover fully and adjust before the start of the postseason. However, when the postseason came around, manager Fredi Gonzalez decided to leave him off the roster for the NLDS. He had hit .179/.309/.362 with 22 homers and 55 RBIs in 136 games; his OPS+ was 83. He was 5th in the NL in walks (77, between Andrew McCutchen and Anthony Rizzo) and third in strikeouts (171, trailing Pedro Alvarez and Jay Bruce). Elliot Johnson had filled in for him in his absence, while the more versatile Paul Janish took the roster spot as a utility infielder. Gonzalez described the decision to leave Uggla off the roster as "gut-wrenching".

After the difficult way in which the 2013 season ended for Uggla, he turned a page at the start of 2014. Having reclaimed his starting job with a strong spring, he was back in the line-up, although he struggled anew in the season's first two weeks. He was hitting below the Mendoza Line with no homers on April 14th when he broke out with a pair of homers against the Philadelphia Phillies. The first, in the 8th, came off B.J. Rosenberg, wedged between homers by Evan Gattis and Andrelton Simmons to give Atlanta a 5-1 lead; the Phillies managed to take the lead back in the bottom of the 8th, but in the 9th, Dan hit a grand slam off Jake Diekman for a 9-6 Braves win. However, he continued to struggle, not hitting another homer in the first half, while his batting average was at .162 in 48 games. He lost his starting job at the end of May, when the Braves called up rookie Tommy La Stella to play second base. On July 13th, he was suspended for one game for reporting 30 minutes late to a game, and immediately after the All-Star break on July 18th, he was given his unconditional release. It was a difficult business decision for the Braves, given that Uggla was still owed $18 million for the season-and-a-half left on his contract, but they had found it impossible to find any takers for his services. On July 21st, Uggla signed a minor league contract with the San Francisco Giants, who were concerned about the health of Marco Scutaro's lower back. He played only two games with the Fresno Grizzlies before he and Tony Abreu were called up to San Francisco on July 25th as a result of injuries to Scutaro and Ehire Adrianza. The change of scenery did not really help Dan as he went 0 for 8 while the Giants were swept out of first place in the NL West by the Los Angeles Dodgers in his first three games; he added two errors in the nationally-televised third game on July 27th, one of them particularly egregious as he let a routine grounder get through his legs as he raised his glove a second too soon. After another "ofer" that made him 0 for 11, the Giants decided to cut their losses and released him on August 1st, calling up SS Matt Duffy from AA ball to take his place.

Not quite ready to call it quits, Dan signed a minor league deal with the Washington Nationals on December 26, 2014, and received an invitation to attend spring training as a non-roster player. In a surprising development, he not only made the team, but was the opening day second baseman against the New York Mets on April 6, 2015. However, he went 0 for 3 with a strikeout and in the 6th, with two outs the Nats up 1-0, a routine pop-up fell between him and SS Ian Desmond, who was charged with an error, leading to two Mets runs and an eventual 3-1 win for the New Yorkers. He got a measure of revenge against his old team, the Braves, on April 28th, when he was the hero of the biggest comeback win in Nationals history. The Nats were trailing 10-2 after four inning before they came bac, with Dan hitting a two-run triple in the 7th and a three-run homer off Jason Grilli in the 9th that gave Washington its margin of victory in a wild 13-12 game. Entering the game, he was hitting only .135.