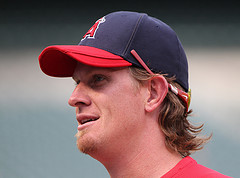 The brother of Jeff Weaver, Jered Weaver was a sensation in his rookie year in the big leagues in 2006, going 11-2 with a 2.56 ERA for the Los Angeles Angels of Anaheim.

Weaver had thrown 45 2/3 consecutive scoreless innings for Team USA in the summer of 2003, but in the 6th inning of the Gold Medal game of the 2003 Pan American Games, he ran into trouble. Carlos Tabares bunted his way aboard and later scored on a Yulieski Gourriel hit. The next inning, Ariel Pestano singled in a run to put Cuba ahead 2-1 and Norge Vera made it hold up as Cuba won 3-1 over Weaver. Weaver had pitched a one-hit game during those Pan American Games, a US Pan Am record that was matched 12 years later by Jake Thompson.

Weaver was a highly touted pitcher coming out of college at Cal State Long Beach, where he won the Golden Spikes Award as the top collegiate player. Jeremy Reed was a teammate on the 2002 Cal State Long Beach team. He was a consensus early first round pick in the 2004 amateur draft, but since he was represented by agent Scott Boras, he fell into the middle of the first round and was selected by the Anaheim Angels. His contract negotiations were contentious, but he eventually signed prior to the 2005 amateur draft.

In 2005, he split his time between the Rancho Cucamonga Quakes in the California League, and the Arkansas Travelers in the Texas League. In both places, his ERA was between 3.80 and 4.00. Moving up to the AAA Salt Lake Bees in the Pacific Coast League in 2006, he appeared in 12 games with a record of 6-1 and an ERA of 2.10 before being called up to the majors. Baseball America rated him as the best pitching prospect and #2 overall prospect (behind Stephen Drew) in the PCL in 2006.

Weaver made his big league debut on May 27, 2006 and did not disappoint, allowing no runs and just three hits over seven innings in his first start. After four outings, he was sent back to the minors, but he was recalled again less than two weeks later. Ironically, his brother was designated for assignment to make room for Jered on the Angels roster. Jered showed the Angels that they made the right decision, going 11-2, 2.56 in 19 starts the rest of the way. He spent his first full season in the majors in 2007, ending with a record of 13-7, 3.91 in 28 starts. He started and lost one game against the Boston Red Sox in the ALDS.

On June 28, 2008, he combined with Jose Arredondo to hold the Los Angeles Dodgers hitless, but still lost the game 1-0, when he allowed Matt Kemp to reach base on his fielding error in the 6th inning, and then to score on a stolen base combined to a throwing error and a sacrifice fly. He was lifted for a pinch-hitter in the top of the seventh. The Angels were the first team to lose a game without allowing a hit since 1992, when Matt Young accomplished the feat for the Boston Red Sox. For the year, he went 11-10, 4.33, his poorest season in his first six in the majors. He was not in the Angels' starting rotation during the post-season, but did win a game in relief against the Red Sox in the ALDS.

In 2009, Weaver pitched extremely well, finishing the year 16-8, 3.75 in 33 starts. He struck out 174 batters over 211 innings. He pitched an excellent game in the ALDS, once again facing Boston, allowing only 1 run in 7.1 innings to earn the win as the Angels finally beat their long-time nemesis. In the ALCS against the New York Yankees, he started one game and was used twice in relief but did not earn a decision, giving up 3 runs in 6.1 innings. In 2010 he beat out Cy Young Award winner Felix Hernandez by one to lead the major leagues in strikeouts with 233. He was only 13-12, but with a solid 3.01 ERA as the Angels' offense fell back significantly in comparison with the previous seasons. In spite of his low win total, he finished 5th in the Cy Young voting, the first time he had earned votes, and was named to the All-Star team.

Weaver began 2011 with a 6-0 record. Only three other pitchers had gone 6-0 before the end of April previously: Dave Stewart (1988), Randy Johnson (2000 and 2002) and Brandon Webb (2008). The wins were not flukes either; over the month he put up an 0.99 ERA, pitched two complete games including a shutout, and struck out 49 in 49.2 innings while walking only 10. On April 10, he struck out a personal-best 15 batters in 7.2 innings in a win over the Toronto Blue Jays. He was named the American League Pitcher of the Month. After hitting a bit of a bump in May, he went back to his winning ways and was chosen to start the 2011 All-Star Game for the AL, in part because his chief rival for the honor, Justin Verlander, was unavailable to pitch having pitched on the Sunday preceding the game. Still, Weaver had the best ERA of any starting pitcher in the majors at that point, at 1.86, so the honor was also earned on merit. Weaver pitched the first inning of the game, giving up only a single to Matt Kemp. In August of that year, Weaver signed a 5-year, $85 million contract with the Angels opting for financial security instead of testing the free agent waters after the 2012 season. He ended the year with a record of 18-8, a 2.41 ERA and 198 innings; Verlander had a tremendous second half and ran away with the 2011 American League Cy Young Award, but Weaver finished second in the voting.

On May 2, 2012, Weaver threw a no-hitter against the Minnesota Twins, easily beating them 9-0; he gave up a single walk in the game, while one batter reached first base on a dropped third strike. It was the 10th no-hitter in Angels history, and came less than a year since Ervin Santana had thrown one in July of 2011. It came after the Angels had struggled mightily in April, finishing the month in last place in the AL West after spending heavily on free agents during the of-season. Facing the Twins again in his next start on May 7th, he had another dominant outing, giving up only three hits in 6 innings in a 9-3 win to improve his record to 5-0. On May 28th however, he was forced to leave a start against the New York Yankees after making only 12 pitches in the 1st inning, complaining of a bad back. The next day, he was placed on the disabled list, returning to action on June 20th. He then went on to have a tremendous month of July, going 6-0 to improve his record to 14-1. He was also selected to the All-Star team for the third straight year that month. On August 6th, he pitched a four-hit shutout over the Oakland A's to earn his 15th win of the season, tops in the majors; it was also his 10th straight winning start, matching a club record set by Chuck Finley in 1997. On August 17th, however, he had the worst start of his career at home against the Tampa Bay Rays, giving up 9 runs in 3 innings, and facing 7 batters in the 4th without recording an out before being lifted from the game. That beating increased his season's ERA from 2.22 to 2.74, likely costing him a shot at the title. On September 18th, he defeated the Texas Rangers, 11-3, to earn the 100th victory of his career; the win improved his season's record to 18-4. He won his 20th game on September 28th with a 7-4 win over the Rangers.

Weaver opened 2013 in an unusual role - as an American League pitcher batting on Opening Day, April 1st, thanks to the transition of interleague play to a year-long scenario. The last AL pitchers to bat on Opening Day had been Pat Dobson and Mel Stottlemyre in 1972. Weaver fanned twice against Johnny Cueto of the Cincinnati Reds. With a 1-1 tie in the 7th, he was pinch-hit for by J.B. Shuck, who also whiffed. In his second start on April 7th, he landed awkwardly on his left elbow in the 5th inning while trying to duck a line drive from the Rangers' Mitch Moreland. He had to be removed from the game, and later x-rays revealed a fracture, placing him on the disabled list for an extended period. He finally recorded his first win of the season in his first start after his return to action on May 29th, beating the Los Angeles Dodgers, 4-3, and striking out 7 over 6 innings. In spite of the time lost, he managed to end the year once again in double figures in wins, with a record of 11-8, 3.27 in 24 starts. It gave him at least 11 wins in each of his first 8 seasons in the majors. He was off to a solid start in 2014, with a record of 9-6, 3.56 in 18 starts before having to leave a start against the Toronto Blue Jays on July 7th after two innings because of tightness in his lower back. He came back from that to finish with another excellent record, at 18-9, 3.59, leading the AL in both wins and starts. He was solid in his only postseason appearance, giving up only 2 runs in 7 innings against the Kansas City Royals in Game 1 of the ALDS, but the Angels ended up losing the game, 3-2, in 11 innings on their way to being swept by the surprising Royals.

Weaver became a free agent after the 2016 season and given his lack of recent success, it took him until February 18 to find a team for 2017, when he signed a one-year deal worth $3 million with the San Diego Padres. He made 9 starts for the Padres, going 0-5, 7.44 before being placed on the disabled list with a hip inflammation, his final appearance coming on May 19th. He made one minor league appearance on a rehabilitation assignment in June, but on August 16th, he announced that he was retiring, effective immediately.

Jered named his son Aden, born in 2013, in honor of teammate Nick Adenhart, who was killed by a drunk driver in 2009.