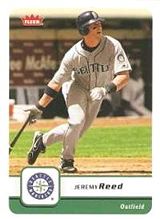 Jeremy Reed has played eight major league seasons in the outfield. In 2009, he made the New York Mets' roster as a back-up outfielder. In 2010 he played with the Toronto Blue Jays and their Las Vegas 51s affiliate but was granted free agency in July and signed with the Chicago White Sox organization, who assigned him to the Charlotte Knights. In 2011, he was a non-roster invitee at the spring training camp of the Milwaukee Brewers, and when he hit .400 in spring training, he made the club. He made some major league appearances, was also in the minors with the Nashville Sounds, and in June was traded to the Minnesota Twins organization where he played for the Rochester Red Wings.

Reed was born in San Dimas, CA, and went to high school at nearby Bonita High School. In 2002, as a junior at Cal State Long Beach, he hit .339. He made the All-Conference Team and tied Bryan Gant for the conference lead with 59 runs.

Reed was drafted in the 2nd round of the 2002 amateur draft by the Chicago White Sox. He was signed by scouts Joe Butler and Matt Hattabaugh and sent to the Kannapolis Intimidators, where he hit .319/.377/.448 with 17 steals in 22 tries. The next year, 2003, he hit .333/.431/.477 with 27 SB in 33 tries in half a season with the Winston-Salem Warthogs, and was brought up to the Birmingham Barons where he hit .409/.474/.591 with 18 steals in 31 tries. He was named to the Baseball America Minor League All-Star First Team as an outfielder. His .373 overall average led the minor leagues, as did his .453 OBP and he was among the leaders in hits (173, 4th). Baseball America also listed him as the #2 prospect in the Carolina League (behind Zack Greinke) and #3 in the Southern League behind Miguel Cabrera and Edwin Jackson. Overall, he was named the #5 outfield prospect in baseball.

In the year 2004, he split his time between two Triple-A teams, hitting for a significantly lower average - .275/.357/.420 for the Charlotte Knights and .305/.366/.455 with the Tacoma Rainiers. He was a key part of the Freddy Garcia trade on June 27th, going to the Seattle Mariners. He was picked as the 5th-best prospect in the International League, the sixth-best in the Pacific Coast League and overall the 13th-best outfield prospect. The Mariners brought him up for 18 games as a September call-up, and he impressed, hitting .397/.470/.466. 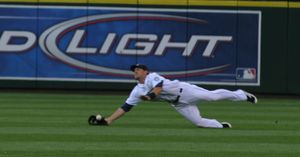 In 2006, he hit .217 in 67 games before going on the 60-day disabled list when he broke his right thumb trying to make a diving catch while playing center field. It was disappointing to Reed, because he had started to hit for more power in June. The Mariners replaced him in center field with Shin-Soo Choo.

In a surprising cut during the latter days of spring training in 2007, the Mariners sent Reed to the minors. He was with the Tacoma Rainiers, where, he hit an even .300, usually playing left field, and batting second in the lineup. He led the team in runs scored with 92. He hit 37 doubles, 5 triples and 13 homers and drove in 64 runs. He came back up to the majors in September but hit just .176 in 13 games.

He was with the Mariners for 2008 spring training, hitting .321, but was sent down to Tacoma on March 29th. As of May 11, he was tearing up the league at Tacoma, hitting over .350 with power, and later that May he was brought up to the Mariners for whom he appeared in 97 games during the season, hitting .269 with 2 homers and 31 RBIs.

After the 2008 season, he was sent to the New York Mets as part of a three-team trade that also involved the Cleveland Indians. Other players involved in the trade were J.J. Putz, Luis Valbuena, Sean Green, Ezequiel Carrera and Endy Chavez. Jeremy was a frequently-used backup for the Mets in 2009, appearing in 76 of the Mets' first 95 games while getting 112 at-bats.

Reed spent three seasons as the minor league hitting coordinator for the Milwaukee Brewers in 2014-2016, then held the same role for the Los Angeles Angels in 2017-2018. He was then promoted to the big league staff as hitting coach in 2019.

Reed is the older brother of Mark Reed.