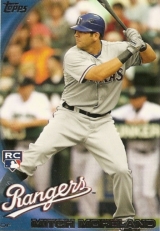 Mitch Moreland came to the majors in 2010.

The Mississippi native continued to impress in 2009 with the Bakersfield Blaze (.341/.421/.594 in 43 G) before being moved up to the Frisco RoughRiders, where he batted .326/.373/.488. On the year, he had 38 doubles, 16 homers, 85 runs and 85 RBI despite missing three weeks with a right foot fracture. He led Rangers farmhands in average, runs and doubles and was named the Rangers' Minor League Player of the Year. He hit .300/.398/.457 for the Surprise Rafters in the Arizona Fall League as well. Baseball America rated him as the third-best position player prospect in the Texas system after Justin Smoak and Jurickson Profar.

Moreland opened 2010 with the Oklahoma City RedHawks, hitting .289/.371/.484 after 95 games, with 11 assists in 80 games in right field. He was then called up to the majors when Ian Kinsler went on the disabled list. In his MLB debut on July 29, 2010, Mitch started at first base for Texas, hitting 8th. He singled off Vin Mazzaro in his first at-bat but was doubled off first on a line-out by Taylor Teagarden. He added another single off Ross Wolf in the 8th to finish the day 2 for 4. He started his major league career 7 for 19.

Moreland got a chance to pitch in the majors on May 6, 2014, when the Rangers were blown out by the Colorado Rockies, 12-1. He came on in the 8th and got the Rockies out in order, displaying a fastball that touched 94 mph on the radar gun. This was enough to prompt observers to comment that the Rangers should make more use of a lefty who can throw that hard. When 1B Prince Fielder, acquired in a big off-season trade, was lost for the season because of neck surgery later that month, Moreland got a chance to be an everyday starter at first base, but it did not last long. He in turn hit the disabled list on June 8th, victim of an ankle that had bothered him all season and that required surgery. He was hitting .246 with 2 homers and 23 RBIs in 52 games.

He came back in 2015, as did Fielder, and both had an excellent first half, with Moreland playing at first base and Fielder at DH. On June 29-30, he had back-to-back two-homer games and was leading the team with 14 at that point. He hit .278 in 123 games, with 27 doubles and 23 homers, scored 51 runs and drove in 85. However, in the postseason, he was completely muzzled by the Toronto Blue Jays' pitching staff, going 0 for 13 in the ALDS. In 2016, his batting average fell to .233, but he still hit 22 homers and drove in 60 runs. He also won a Gold Glove for his fielding at first base. The Rangers repeated as division champions and in the Division Series, he went 2 for 8 with a pair of doubles, but Texas once again lost to Toronto. On December 6th, he signed a free agent contract with the Boston Red Sox.

In his first season with Boston, in 2017, he took over as the team's regular first baseman as incumbent Hanley Ramirez became the DH, the spot having been vacated by David Ortiz's retirement. He played 149 games and hit .246 with 22 homers and 79 RBIs. Superficially, this looked like decent production, but in fact his OPS+ was below 100, problematic for a team that was looking for a power source to replace Ortiz's lost production. The Red Sox managed to repeat as AL East champions in spite of hitting the fewest homers of any AL team, but were ousted in four games by the Houston Astros in the Division Series. Mitch was one of the most productive hitters on the team during the series, going 5-for-13 (.385) with a pair of doubles. There was some question about whether the Red Sox would want to bring him back, or instead look for a more offence-minded first baseman, but on December 18th, he agreed to a two-year deal with the team that would earn him $13 million. He had a strong first half in 2018, landing him a spot on the All-Star team for the first time. He slowed down in the second half though, and by the time the season ended was sharing playing time at first base with Steve Pearce. In 124 games, he hit .245 with 15 homers and 68 RBIs, but hit just .191 in the second half, with 4 homers and 22 RBIs. He thus did not see extensive playing time in the Sox's run to a World Series title, as Pearce grabbed the spotlight to win the title of World Series MVP. He had just 17 at-bats in the three series the Red Sox played, and had 5 hits including one homer.

Pearce was injured at the start of the 2019 season, so Moreland was back to playing every day. The Red Sox won only 3 of their first 11 games, all on the road, but Moreland was the difference in two of those wins. On March 29th, he hit a dramatic three-run homer off Hunter Strickland of the Seattle Mariners to turn a 6-4 9th-inning deficit into a 7-6 win, then on April 7th, his solo homer off Merrill Kelly was the sole run in a 1-0 win over the Arizona Diamondbacks. On April 9th, in the Sox's home opener, he homered in his first at-bat off Matt Shoemaker of the Toronto Blue Jays, and then in the teams second game, he homered again, this time off Greg Biagini to make it four straight games with a long ball. In that game, he also hit a key double in the middle of the Sox's game-winning rally against closer Ken Giles in the 9th inning. In 91 games that season, he hit .252 with 19 homers and 52 RBIs, good for an OPS+ of 112, the third-best of his career. He then got off to a tremendous start in 2020, one of the few players on the Sox doing that, as he hit .328 in his first 22 games, with 8 homers and 21 RBIs. His OPS+ was a stratospheric 204 as he was slugging .746. On August 30th, he was traded to the San Diego Padres for two prospects, Hudson Potts and Jeisson Rosario, with the purpose of serving as the team's DH against righties.