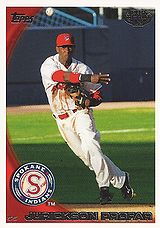 Shortstop Jurickson Profar starred in the Little League World Series and then reached the majors with the Texas Rangers in 2012.

Profar helped Willemstad win the 2004 Little League World Series with a two-run homer in the finale against Thousand Oaks, CA. The next year he led the team back to the title game. At age 16, he drew considerable interest on the free agent market with his 93 mph fastball, but only the Texas Rangers were willing to let him be an everyday player. He was signed by Director of International Operations Mike Daly, and scouts Chu Halabi and Jose Felomina in 2009. He made his pro debut with the 2010 Spokane Indians, hitting .294/.294/.588 in his first four games and finishing the year at .250/.323/.373 in 63 games. In 2011, he moved up to the Hickory Crawdads of the South Atlantic League and had a great season, being named the league's Most Valuable Player. He hit .286/.390/.493 as the everyday shortstop, scoring 86 runs, hitting 37 doubles and 12 homers, and driving in 65 runs while stealing 23 bases. He was selected to play in the 2011 Futures Game.

Profar confirmed his status as one of the brightest young stars in organized baseball in 2012, hitting .281 in 126 games as a 19-year-old for the AA Frisco Rough Riders. He hit 26 doubles, 7 triples and 14 homers, scored 76 runs and drove in 62. He played in the 2012 Futures Game, his second appearance in the contest, confirming his status as Baseball America's #7 prospect, a rank given to him before the start of the season. He was promoted to the major league Rangers when rosters expanded on September 1st and made his debut the next day, starting st shortstop against the Cleveland Indians. Still 6 months shy of his 20th birthday, he hit a homer in his first big league at-bat, taking Zach McAllister deep in the 3rd inning, becoming the first-ever member of the Rangers to homer in his first career at bat (Brant Alyea had done so when the team was still the Washington Senators); only two other players in major league history, Whitey Lockman and Ted Tappe, had ever accomplished the feat as teenagers before Profar. He had another hit in the game, a double in his second at-bat, finishing 2 for 4, as the Rangers won, 8-3. He went 3 for 17 in 9 games, but made the team's postseason roster. Used as a pinch-hitter in the Wild Card Game, he singled off Baltimore Orioles closer Jim Johnson in the 9th to load the bases, but Daniel Murphy followed by flying out to end the game with a 5-1 Rangers loss.

Heading into the 2013 season, Profar was named the top prospect in baseball by mlb.com. While there had been speculation that the Rangers would trade incumbent Elvis Andrus to make room for Profar, they gave Andrus a long-term contract instead, and Profar began the season in the minors. Playing for the AAA Round Rock Express, he hit .278/.370/.438 with 7 doubles and 4 homers in 37 games, playing both SS and 2B. On May 19th, he was called up to Texas when 2B Ian Kinsler was placed on the disabled list with bruised ribs. He stayed on for the remainder of the season as manager Ron Washington managed to find playing time for him all over the diamond, including second base, shortstop, third base, left field and designated hitter. On September 26th, he hit a 9th-inning walk-off homer against Michael Kohn of the Los Angeles Angels of Anaheim to give the Rangers a huge 6-5 win that kept them within a game of a wild card spot with three games remaining in the season. The season came down to a one-game playoff against the Tampa Bay Rays to determine the second AL wild card team, but he did not play in that contest, which the Rangers lost. He ended the year at .237/.308/.336 in 85 games, with 6 homers and 26 RBI in 286 at-bats. He started games at five different positions, including DH, a situation that made it hard for him to settle down properly.

Heading into 2014, the Rangers gave Profar a huge vote of confidence when they traded long-time starting 2B Ian Kinsler to the Detroit Tigers in return for Prince Fielder, freeing up the position for the promising youngster from Curaçao. However, things did not go as planned in spring training when he injured his shoulder attempting to complete a double play on March 22nd against the Kansas City Royals; an MRI revealed a muscle tear, aggravating a pre-existing injury dating back to 2010 and putting him on the shelf for an extended period. This also left Texas without an obvious replacement. On May 22nd, the news got worse as the Rangers stated he had re-injured the shoulder while undergoing rehabilitation and would not be back that season. He tried to heal the shoulder through rest and rehabilitation and as a result did not play at all that year, but heading into spring training in 2015, the Rangers received more bad news when Profar was not ready to go. There was no avoiding surgery this time, with the result being another season wiped out and significant questions raised about his future.

Jurickson finally came back in 2016 and played 90 games for the Rangers, being used all over the field, with over 10 games at 1B, 2B, 3B, SS and in LF. He hit .239 with 5 homers and 20 RBIs. The Rangers won a second straight division title, but he was not used in the postseason. In 2017, he began the season in a similar role in Texas, but by the end of April was hitting a mere .135 in 15 games. On April 30th, the Rangers decided to send him down to the minors to give him regular playing time, while claiming utility infielder Pete Kozma off waivers from the New York Yankees to take his place on the big league roster. He played just 22 games in the majors that year, hitting .172 but did well in AAA with the Round Rock Express, where in 87 games, he hit .287 with 7 homers and 45 RBIs. He finally broke through in 2018 when at age 25 he put together a very solid season. In 146 games, he hit .254 with 35 doubles, 6 triples and 20 homers, scoring 82 runs and driving in 77. He was used as a super utility player that season, with 68 games at shortstop, 51 at third base, 24 at first base and 10 at second base. Following the season, on December 21st, he was traded to the Oakland Athletics in a three-team trade that also involved the Tampa Bay Rays. The Rangers received four prospects in return for Profar and also gave up minor league pitcher Rollie Lacy in the complex deal.

Jurickson was inserted as the A's second baseman in 2019, forming a double play combo with SS Marcus Semien, but he got off to a slow start. At the end of April, he was hitting just .165 in 28 games with 2 homers and 13 RBIs. Ironically, 5 of the ribbies had come in the same game, a 13-2 win over the Baltimore Orioles on April 9th in which he also hit his first homers while going 4- for 5. On May 7th, however, he hit a two-run homer in a game against the Cincinnati Reds that accounted for all of Oakland's runs in a 2-0 win in which Mike Fiers pitched a no-hitter. He had started May on a good foot, going 6 for 16 in his first four games. He played 139 games that season, hitting .218 with 20 homers and 67 RBIs. He also went 2 for 4 in the Wild Card Game which the A's lost to the Tampa Bay Rays. On December 2nd, he was traded again, this time heading to the San Diego Padres in return for Austin Allen and future considerations.

His first season with the Padres was the pandemic-shortened 2020 season, in which he appeared in 56 of 60 games. he batted .278 with 7 homers and 25 RBIs, for a career-best OPS+ of 114. defensively, he split his time between left field and second base. He went 4 for 7 as the Padres defeated the St. Louis Cardinals in the Wild Card Series, but 0 for 8 when they were swept in three games by the Los Angeles Dodgers in the Division Series. In 2021, he played 137 games, this time appearing at all three outfield spots and first base, in addition to just 10 games at second base. He hit .227 with 4 homers and 33 RBIs, his OPS+ collapsing to 83 as the Padres had a disappointing season, completely collapsing in the second half to miss the postseason by a wide margin. The Padres were back among postseason favorites in 2022, and he was back playing well, hitting ,242 with 8 homers and 38 RBIs after 83 games, with an OPS+ of 116. However, on July 7th, he as involved in a violent collision in the outfield, as SS C.J. Abrams kneed him in the jaw as both were going for a fly ball in shallow left hit by the San Francisco Giants' Tommy La Stella. Abrams managed to make the catch, but got the worst of the contact, collapsing to the ground after he tried to walk to the dugout. It then took some time to get a medical cart to wheel him out to get proper medical attention. He was sent to a local hospital to undergo tests.

Profar's brother, Juremi Profar, played in the minors, and his nephew Shavently Profar debuted in the top Dutch league in 2014.