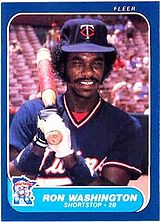 As a major league player, Ron Washington was best known for his time with the Minnesota Twins. He had grown up living in New Orleans, LA.

After his playing career ended, he joined the New York Mets organization, where he served as a minor league coach and manager. Washington was the coach for the Tidewater Tides in 1991-1992. He managed the Capital City Bombers in 1993-1994, then coached the Norfolk Tides in 1995. From 1996 to 2006, he was an Oakland Athletics coach.

He was hired to replace Buck Showalter as manager of the Texas Rangers on November 5, 2006. He beat out 4 other managerial candidates, including Don Wakamatsu, Trey Hillman, and Manny Acta (all future major league managers). Hillman might have been offered the job, but he was offered more money by the Nippon Ham Fighters to stay on with them, after he managed them to the Nippon Pro Baseball championship earlier in the Fall of 2006. Both Washington and Hillman had interviewed with the Oakland Athletics about their managerial vacancy, one week before Washington got the job with the Rangers. After a couple of losing seasons in 2007 and !2008, Washington guided the Rangers to a second-place finish in the AL West in 2009, with a record of 87-75. It was the start of the most successful run in the team's history, which would include two trips to the World Series in 2010 and 2011. But the period was not without controversy.

On March 17, 2010, Washington announced at a press conference that he had tested positive for cocaine use the previous summer. Calling it a "one-time mistake", he offered his resignation as Rangers manager, but top-level management rejected it. He also admitted to having used marijuana and amphetamines during his playing career. He then led the Rangers to a number of franchise firsts that season, including their first win in a postseason series when they defeated the Tampa Bay Rays in the ALDS, and their first World Series appearance after an upset of the New York Yankees in the ALCS. In the 2010 World Series however, the Rangers were no match for the strong pitching of the San Francisco Giants and bowed out in 5 games. The Rangers repeated as AL West champions in 2011 with an even stronger season, then reached the World Series for the second consecutive year by defeating the Tampa Bay Rays in the ALDS and the Detroit Tigers in the ALCS. They were twice one pitch away from winning that World Series against the St. Louis Cardinals, having a two-run lead going into the bottom of both the 9th and 10th innings of Game 6, but eventually lost that game and Game 7 as well to fall agonizingly close to the prize. In 2012, a late-season push by the Oakland Athletics denied the Rangers a third straight division title on the last day of the season, and they then lost the Wild Card Game at home to the Baltimore Orioles to make an early exit from the postseason. More disappointment came in 2013, after the team seemed to have the AL West title locked up in August, only to have a dreadful month of September and see the A's once again ride a late surge to a division title. Worse, their awful play in the final month also pushed them out of the wild card race.

The Rangers had a very difficult season in 2014, as they were racked by injuries and set records for most players and pitchers used by a major league team in a season. On September 5th, Washington announced that he was stepping down as manager for the remainder of the season "to attend to a personal matter". The Rangers had the worst record in the majors at that point, at 53-87. Bench coach Tim Bogar took over as manager on an interim basis. Washington stated he intended to be back at the helm of the Rangers in 2015, however, although there was no guarantee that the Rangers would want him back. In a short press conference on September 18th, he explained that he had taken his decision because "he had not been true" to his wife of 42 years and needed to make things right with her. But when the season ended, the Rangers indicated they had no intention of bringing Washington back as they began a full-on search for a new manager which led to the hiring of Jeff Banister a few weeks later.

Washington returned to baseball in May of 2015 when he was hired by the Oakland A's, for whom he had worked a decade earlier in his career, as a special infield instructor with the major league team. The A's had fallen to last place in the AL West after a decent start and were experiencing particular trouble on the defensive end of things, leading the major leagues with 44 errors. On August 25th of that year, Mike Gallego was relieved of his third base coach duties and Washington was named as his replacement. In 2017, he moved to the Atlanta Braves as third base coach.