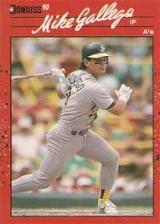 Since his playing career ended, infielder Mike Gallego has been a Colorado Rockies coach, serving on the club's staff in 2003 and again in 2005 to 2007. From 2008 to August 25, 2015 he was third base coach for the Oakland A's. In 2016, he joined the front office of the Los Angeles Angels of Anaheim as Director of player development. In 2019, following the appointment of new manager Brad Ausmus, he put on a uniform again as third base and infield coach of the team now simply called the "Los Angeles Angels". In 2020, he moved to bench coach under Joe Maddon.

His son, Niko Gallego, was drafted by the Rockies in the 37th round of the 2007 amateur draft, but opted to go to UCLA, where he competed in the 2010 College World Series. His nephew, Austin Barnes, was on the Arizona State University roster in the same CWS and reached the major leagues in 2015. Mike played for Team USA in the 1979 Pan American Games.