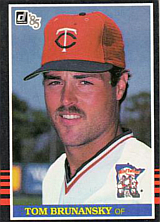 Tom Brunansky was a low average/good on base slugger who played 14 years, and exactly 1,800 games, in the major leagues with five teams, hitting 271 lifetime home runs. He had decent range in right field and drew walks well, and while he was never in the top five in the league in homers, he was top ten three times. He was an All-Star in 1985 and played on the 1987 Minnesota Twins team that won the World Series.

Tom played for the 1973 West Covina Pony League Championship Team in California. He attended Cal Poly-Pomona, although he never played for them, having been selected by the California Angels in the first round (14th overall) of the 1978 draft. Seventeen rounds later, his high school teammate, Richard Palmer, was drafted, though he never appeared in the bigs.

Tom made his major league debut with the Angels early in the 1981 season, then was traded to Minnesota, with Mike Walters, for Doug Corbett and Rob Wilfong on May 15, 1982 after starting the year in Triple A. He was immediately brought up to be the Twins' starting right fielder, a position he held for the next seven years until being traded early in 1988. In 1982, Brunansky became the only Twin in franchise history to hit an inside-the-park grand slam. Apart from his brief stint with the club in 1988, he recorded 20 or more home runs each year in the Twin Cities, exceeding 30 with a pair of 32 home run seasons in 1984 and 1987. He was the Twins lone All-Star rep in 1985, swatting 27 bombs with 90 RBI and 71 runs scored. In 1988, having been traded to the St. Louis Cardinals for Tommy Herr, he suffered a post All-Star break slump. Before the break, he hit .263 with 14 home runs and 55 RBI. After the break, he hit .209 with 9 home runs and 30 RBI. He enjoyed his final 20 home run season in 1989 and was dealt to the Boston Red Sox in 1990 in a one-for-one swap for Hall of Fame closer Lee Smith. Tom spent the rest of his career with the Sawx and Milwaukee Brewers, wrapping it up with 64 games in 1994.

Brunansky started his coaching career with the Poway High School Titans in fall 2004. He remained at Poway until joining the Minnesota Twins organization in July 2010 as the hitting coach for their GCL Twins affiliate. Bruno held the same position with the New Britain Rock Cats in 2011 and Rochester Red Wings in 2012. In 2013, he was named the Twins' hitting coach and was the only member of manager Ron Gardenhire's coaching staff to be retained when the long-time Twins manager was fired following the 2014 season and replaced by Paul Molitor. Tom was let go after the Twins' difficult 2016 season, then became an assistant coach at University of Saint Katherine in 2017. Brunansky is still coaching there as of 2022.

He is the brother-in-law of Dave Engle and son-in-law of minor league catcher Roy Engle.