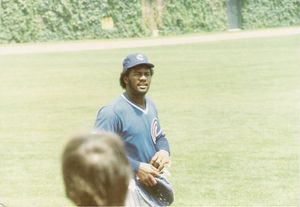 Lee Smith was a top reliever. He was a strong candidate for the Hall of Fame, although time ran out for him to be voted in by the BBWAA, shuttling his candidacy to the Veterans Committee where he was unanimously elected on his first attempt in the 2019 Hall of Fame Election.

He was signed as a 2nd round pick in the 1975 amateur draft by the Chicago Cubs and scout Buck O'Neil. He reached the majors late in the 1980 season, going 2-0, 2.80 in 18 games. The Cubs toyed with making him a starter in 1982, when he made 5 starts, but instead decided to make him their closer. He had 17 saves in 72 games that season, and never started a game after that. In 1983, he made the All-Star team for the first time - he would eventually be named to the All-Star team 7 times - and led the National League in saves with 29. He went 4-10 in spite of a sparkling 1.65 ERA that season - the best ERA of his career. He pitched in the postseason in 1984, saving Game 2 of the NLCS against the San Diego Padres, but then being charged with a loss in Game 4. He came in in the 8th inning with the game tied 5-5, stranded a couple of baserunners that inning, then gave up a walk-off two-run homer to Steve Garvey with one out in the bottom of the 9th with the Cubs one win away from reaching the World Series for the first time since 1945. The Cubs then lost Game 5 and were eliminated.

He set a personal mark with 112 strikeouts in 1985 - his only season over 100, then after the 1987 season, he was traded to the Boston Red Sox for Al Nipper and Calvin Schiraldi. He returned to the postseason with Boston in 1988, when he saved 29 games with a 2.80 ERA, but was again roughed up in the ALCS, this time against the Oakland Athletics. He lost Game 2 on October 6th when he came in in the top of the 9th with a 3-3 tie and proceeded to allow the go-ahead run on singles by Ron Hassey, Tony Phillips and Walt Weiss. The Red Sox were swept in four games and Smith never had another chance to pitch in the postseason after that. In 1990, he was traded in mid-year to the St. Louis Cardinals for Tom Brunansky, thus missing a postseason appearance. It was still a very good year for him as he went a combined 5-5, 2.06 with 31 saves that season. The Cardinals began to use him as a conventional one-inning closer, leading him to post some of his highest save totals: he topped 40 saves in each of the next three season, including leading the NL with 47 and 43 saves respectively in 1991 and 1992. He had 43 saves, but a relatively high ERA of 4.50, when he was traded to the New York Yankees late in the 1993 season, and added 3 more with an unblemished ERA in 8 games for the Bronx Bombers. He then joined the Baltimore Orioles as a free-agent in 1994. In that strike-shortened season, he led the American League in saves with 33.

Smith moved to the California Angels in 1995 and picked up another 37 saves. However, by then he was 37 and while he pitched two more seasons, he had little left in the tank. The Angels traded him to the Cincinnati Reds in return for Chuck McElroy after 11 games, as Troy Percival had replaced him as the closer. But the Reds already had Jeff Brantley for the role (and Jeff Shaw as an understudy), so Lee only saved 2 games in 43 appearances. In 1987, the Montreal Expos gave him a chance, with a mission to help mentor a young Ugueth Urbina, who had just been converted from starting, into the role of closer. He did save 5 games in 25 appearances, but he was clearly struggling by them as his ERA was 5.82. he could still throw gas, but after about 10 to 15 pitches in an outing, was basically done. Opposing teams began to wait him out, and by mid-season it was clear he could no longer contribute. He made his final appearance on July 2nd, then went on the disabled list and was released ion late September. The Kansas City Royals gave him a quick look the following spring, but he failed to stick.

Smith was the all-time leader in saves, with 478, until Trevor Hoffman broke his record in 2006; Jeff Reardon had held the record before Smith, with 367. Smith was remarkable for his consistency. In a role where ups-and-downs in performance are very common, Smith led the league in saves four times, was also second four times, was third once, fourth twice, and otherwise in the top 10 three other times. He was in the top 5 in the Cy Young Award voting three times, finishing #2 in 1991 when he was a member of the St. Louis Cardinals.

Smith was the pitching coach for the South African team in the 2006 World Baseball Classic. He has been an instructor in both the MLB European Academy and MLB African Academy.

In Hall of Fame voting, 2008 was Smith's sixth year on the ballot and he received 43.3% of the vote, putting him in fifth place. In 2010, he got 47.3% of the vote, and in 2011, after teammate Andre Dawson called for his election in his induction speech the previous summer, his total fell slightly, to 45.3%. He did make a decent gain in 2012, moving up to 50.6% thanks to a weak class of first-year candidates. However in 2013, when he should have gained more ground because of his clean reputation in comparison to members of the infamous "steroid class", he regressed to 47.8%, making it increasingly unlikely that he would be voted in by the BBWAA with only four years of eligibility remaining. He fell back even further in 2014, to 29.9%, the victim of a very strong ballot that saw almost all holdovers lose ground. He did not progress over the next two years, and headed into his final year of eligibility with almost no chance of election. Indeed, he only received 151 votes (34.2%) in 2017 and dropped off the ballot, having exhausted his eligibility. However, as soon as the Veterans Committee returned to considering players from the "Today's Game" era, in 2019, he was placed on the ballot and was considered one of the strongest candidates that year. Indeed, he was voted in unanimously, while contemporary Harold Baines joined him by receiving 12 of 16 votes.

Smith continued to hold the record for the most games finished, with 802, even after being passed on the all-time saves list, but that record eventually fell to Hoffman as well, and Mariano Rivera also overtook him during the 2010 season.

Smith returned to the field as pitching coach of the AZL Giants Black in 2018.