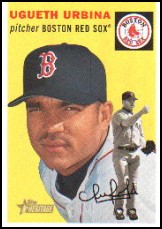 A hard thrower, Ugueth Urbina first came up with the Montreal Expos for a few games early in the 1995 season. Originally a starter, he won 10 games (against 5 losses) as a rookie in 1996 but was moved to the bullpen late in the year, as his stuff was more obviously suited for that role. He found immediate success as a reliever, saving 27 games in 1997, then 34 with a sparkling 1.30 ERA in 1998, when he made the All-Star team, and 41 in 1999, leading the National League. The Expos were a terrible team those last two seasons, so his numbers are even more remarkable. An injury limited him to 13 appearances in 2000, but he was back healthy in 2001, when he saved 15 games in 41 appearances by the end of July. The Expos were willing to trade him by that point, and first reached a deal with the New York Yankees, who nixed it when Urbina failed a physical. A few days later, on July 31st, he was traded to the Boston Red Sox for Tomo Ohka and Rich Rundles.

Urbina saved 9 games in 19 appearances, with a 2.25 ERA for the Red Sox in 2001, then followed that with an excellent year in 2002 when he saved 40 games and made the All-Star team for the second time. He became a free agent after the season, but the Red Sox were not willing to overpay for his services and he instead signed with the Texas Rangers. He had a very solid first half in 2003, saving 26 games in 39 appearances. On July 11th, the Florida Marlins acquired him, giving up to prospect Adrian Gonzalez as well as P Ryan Snare for the privilege. He saved only 6 games in 33 appearances the rest of the year, as Braden Looper was the titular closer, but his ERA of 1.41 was excellent and contributed to the Fish winning an unexpected Wild Card slot. He was a key cog in the Marlins' conquest of a second World Championship that year, saving a game in both the NLDS and NLCS, also picking up a win over the Chicago Cubs in the NLCS, and two in the World Series win over the New York Yankees.

In 2004, he signed on as a free agent with the Detroit Tigers but struggled to some extent. picking up only 26 saves with a 4.50 ERA and 32 walks in 54 innings. In 2005, he pitched 81 games, the most in any season during his career, the first 25 with the Tigers, when he went 1-3 with 9 saves and a 2.63 ERA, and the last 56 with the Philadelphia Phillies, where he was a middle reliever. He only registered one save for the Phils, the 237th and last of his career. He pitched his last game on October 2nd, as off-field events ended his career prematurely.

In 2004, his mother was kidnapped in his native Venezuela, but fortunately she was found unharmed after many months in captivity. On November 7, 2005, Urbina was arrested in Venezuela pending formal charges of attempted murder. The charges stemmed from an incident at his family's ranch on October 16th where Urbina and a group of men allegedly attacked five workers with machetes and poured gasoline on them. On March 28, 2007, he was sentenced to 14 years in prison. He served seven years before being released on December 26, 2012. He always denied involvement in the affair, claiming he was sleeping at the time of the attack.

Immediately after his release from prison, Urbina joined the Leones del Caracas and indicated that, at 38, he was still hoping to return to the big leagues.

His son Ugueth Urbina Jr. signed with the Seattle Mariners while Urbina Sr. was in prison. Another son, Juan Urbina, was signed by the New York Mets in 2009.