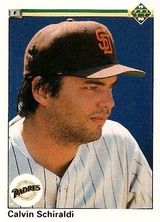 Calvin Schiraldi pitched 8 years in the major leagues with a record of 32-39. He was also a tremendous college star, considered better by many people than his teammate Roger Clemens. He attended the University of Texas, which won the 1983 College World Series; he was given the award as the Most Outstanding Player. Teammates at Texas included Clemens and Spike Owen, who would also be his teammates on the 1986 Boston Red Sox.

Drafted in the first round by the New York Mets in the 1983 amateur draft, he had a tremndous year in the minors with the Jackson Mets in 1984, when he went 14-3. He then moved up to the Tidewater Tides where he was 3-1 that same season. He made his debut in the majors that September.

By 1986, he had found a role with the division-winning Boston Red Sox, as he posted a 1.41 ERA with 9 saves in 25 appearances. He was their closer in the 1986 World Series against his former team, the Mets and in the famous Game 6 on October 25th, he failed to protect a 3-2 lead in the bottom of the 8th, then given another chance with a 5-3 lead in the 10th, he got the first two batters out, but then allowed three consecutive singles before being replaced by Bob Stanley, who allowed the tying an winning runs to score. He pitched again in Game 7 and had another meltdown, as he replaced Bruce Hurst in the bottom of the 7th with the game tied at 3-3. He allowed a lead-off homer to Ray Knight, then a single, a wild pitch and another single before retiring his first batter on a sacrifice bunt. He was replaced by Joe Sambito, who allowed the inherited runner to score, and he was charged with the loss again.

He is currently (2016) the baseball coach at St. Michael's Catholic Academy.