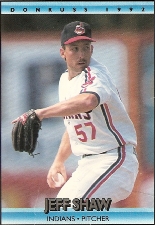 In 1997, pitching for the Cincinnati Reds, Jeff Shaw recorded a save in 15 straight appearances on the mound. It was a Reds team record until 2012, when Aroldis Chapman eclipsed him. Shaw became an elite closer relatively late in his career, not being assigned to the role until he was 30 years old and in his 9th major league season.

Jeff was the first pick of the 1986 January amateur draft, the last time a draft was held in January in addition to the regular June draft. He was selected by the Cleveland Indians out of nearby Cuyahoga Community College. He was a starter when he first came up to the majors with Cleveland in 1990, going 3-4, 6.66, in 12 games. He had a solid 3.36 ERA in 29 games as a reliever in 1991, even if his record was 0-5. He recorded his first career save that year. He spent most of 1992 in the minor leagues, going 0-1, 8.22 in 2 major league appearances.

By that point, Shaw had had a nondescript career, only showing that he was a generic right-handed reliever who could give his team a fair number of average innings. When he signed with the Reds for the 1996 season, there was no reason to expect much else, but in his first year with the team, he was given much more important responsibilities. He ended up with a record of 8-6, 2.49 in 78 appearances, pitching 104 2/3 innings and picking up 4 saves as a key member of the team's bullpen. On the strength of that very solid year, the Reds handed him the closer job in May of 1997, taking over for an injured Jeff Brantley, and it's fair to say that he exceeded all expectations, going 4-2, 2.38 with a league-leading 42 saves, with a K/W ratio of 74/12 in 94 2/3 innings. His string of consecutive saves occurred between August 25th and September 19th; he was charged with a blown save in his next outing, then finished the year with two more saves in his final two appearances. He won the Rolaids Relief Award as the best reliever in the National League. He continued to pitch lights out in 1998, putting up a 1.81 ERA with 23 saves in 39 outings for the Reds and being named to the All-Star team for the first time. On July 4th, he was traded to the Los Angeles Dodgers for Paul Konerko and Dennys Reyes. Strangely, his first appearance in a Dodgers uniform was in the All-Star Game. He picked up another 25 saves in 34 games for his new team, ending the year with a combined record of 3-8, 2.12 and 48 saves.

Jeff Shaw pitched three more seasons with the Dodgers, and kept the closer's job to the end, racking up 34 saves with a 2.78 ERA in 1999, 27 saves in 2000, and another 43 in 77 appearances in 2001. His ERA did go up somewhat - these were the heart of the big-offense era - but were still pretty good, finishing at 3.62 in 2001, when he was an All-Star for the second time. After that season, he became a free agent again. He could likely have found a job and continued to pitch had he wanted to, but he chose to retire at age 35, having accomplished much more in the major leagues than anyone would have thought possible. In all, he had pitched 633 games in 12 years, picking up 203 saves with a 3.54 ERA - good for an ERA+ of 119.

His son, Travis Shaw, is an infielder who made his major league debut with the Boston Red Sox in 2015.