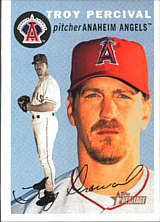 Troy Percival and Eric Show are the two most prominent major league pitchers to come out of the University of California, Riverside.

On September 30, 2007, he made the first start of his career for the St. Louis Cardinals against the Pittsburgh Pirates; he pitched only the 1st inning, and the Cards used nine pitchers to get through the game. At age 37, he was one of the 10 oldest pitchers to make his first start in the majors. It came after 638 relief appearances, and he would make 64 more appearances out of the bullpen over the last two years of his career without getting another start.

He allowed the first home run to be reviewed by instant replay, surrendering a shot to Alex Rodriguez on September 3, 2008. The home run call by Brian Runge was upheld.

In 2015, Percival became the head coach at his alma mater, the University of California, Riverside.