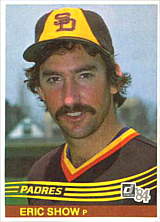 "I'm tired of hearing about his unlucky luck. That's been at the root of the problem all year. If something goes wrong, he quits. That's why runs aren't scored for him. Guys don't want to play for him. One guy got tired of hearing it." - Tim Flannery, 1985

Pitcher Eric Show was signed as an 18th round pick in the 1978 amateur draft by the San Diego Padres and scouts Cliff Ditto and Bob Fontaine Jr..

Show was a mainstay in the Padres rotation through most of the 1980s. In 1984, he went 15-9 on a club that reached the World Series. The next year 1985, he was on the mound when Pete Rose got his 4,192nd hit to break Ty Cobb's career mark. While the crowd cheered, Show sat on the mound with his arms folded.

Show is remembered by Chicago Cubs fans for throwing a beanball at Andre Dawson's face after the slugger hit a home run off him in 1987. Dawson was initially so banged up on the play (he got over 20 stitches) that he could not charge the mound, so instead his teammates, led by Rick Sutcliffe, charged the mound from the dugout. Show was removed from the game by the umpires for his own safety.

In ten seasons with the Padres, Show won exactly 100 games. He became a free agent after the 1990 season and signed with the Oakland Athletics. However, he struggled with the club, posting a career-high 5.92 ERA in 23 games with the A's in 1991. Prior to the 1992 season, he asked for his release, and he never played again.

Away from the diamond, Show was remembered for his membership in the controversial, conservative John Birch Society, recruiting teammates Dave Dravecky and Mark Thurmond. He also played the guitar and released an album of jazz music at one time.

Show struggled with drug abuse during his life. He was found dead in his bed at a drug rehabilitation center at age 37.