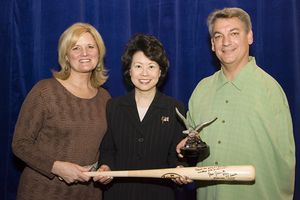 Dravecky and his wife {left} receive the Dept. of Labor SPIRIT award.

Dave Dravecky is probably most remembered for the gruesome footage of his arm breaking mid-pitch. After surgery to remove a desmoid tumor in the deltoid muscle of his pitching arm (left arm), Dravecky determinedly re-took the mound ten months later and, on August 10, 1989, won the first game of his short-lived comeback, pitching 7 shutout innings in a 4-3 victory against the Cincinnati Reds. Five days later, pitching in Montreal against the Expos, his arm snapped as he attempted to deliver a fastball. The tumor had returned. Incredibly, Dravecky re-broke the arm weeks later, during the Giants' celebration of winning the 1989 National League Pennant. He eventually lost his left arm, shoulder, shoulder blade and left collarbone to cancer and to quell a recurrent staph infection in his arm that threatened his life. The experience turned him into an inspirational and motivational speaker.

His uncle, Andy Dravecky, was a catcher in the Pittsburgh Pirates chain in 1946-1949.