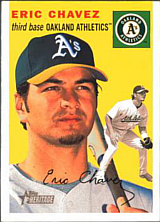 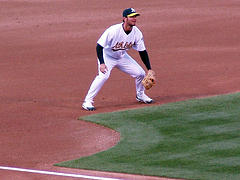 Eric Chavez was one of the better third basemen in history never to make an All-Star Game, despite a strong .268/.342/.475 career line and 260 career home runs. A six-time Gold Glove winner and a Silver Slugger honoree once, his heyday was 1999 to 2006 during the A's "Moneyball" peak. He fell off precipitously to injuries beginning in 2007, never playing more than 113 games until retiring in 2014 as a bit player.

Chavez went 10th overall to Oakland in the 1996 amateur draft, tearing through the minor leagues en route to a September 1998 call-up. He was named Baseball America Minor League Player of the Year after torching Double A and Triple A pitching that summer to the tune of a .327/.388/.603 line with 33 home runs, 104 runs scored and 126 RBI. He did not find his groove as a big leaguer until 2000, at just 22, when he batted .277/.355/.495 with 26 bombs in 153 games. On June 21st of that season, he went 4-for-4 with 3 runs scored en route to hitting for the cycle in a 10-3 whooping of the Baltimore Orioles by the A's. It was the first of four straight seasons the A's headed to October baseball and the first of seven straight seasons for Eric in which he would go deep 20 or more times.

Injuries began to wreak havoc on him, mainly due to a seriously sore back. He played 90 games in 2007, impressively belting 15 home runs despite the pain, then only played 64 games over the next three seasons. After a third year in a row cut short, a 33-game stint with the 2010 club, he became a free agent and considered retirement. He decided to attempt a comeback with the New York Yankees in 2011 on a minor league deal. After a solid spring training, he made the team as a back-up first baseman. He started well, batting .290 with a .405 OBP in his first 16 games; he even spelled Alex Rodriguez at third base for a few games. Injury struck again on May 5th, as he broke a bone in his foot legging out a triple and was immediately placed on the disabled list. He came back in time to spell A-Rod for a longer period in August, and ended up playing 42 games at third base out of 58 total, hitting .263/.320/.356 for the year. In 2012, he was healthy for the entire season, playing 113 games, the most since 2006. He hit .281/.348/.496 in 278 at bats, with 12 doubles, 16 homers and 37 RBI. He took over for Rodriguez for a couple of long stretches when A-Rod was dealing with injuries, then started three times during the postseason with the struggling Rodriguez on the bench. The radical move did not pay off, as Chavez was 0 for 8 in both the ALDS and ALCS.

When it was announced during the 2012-2013 off-season that A-Rod needed to undergo surgery on his hip and would miss a good part of 2013, Chavez seemed to be the logical candidate to step into the breach. But he was a free agent, and decided on December 5th to accept a one-year deal from the Arizona Diamondbacks for $3 million instead. Continuing in a backup role, he had a big moment on September 6th, when he pinch-hit for Patrick Corbin with two outs in the 9th inning with San Francisco Giants pitcher Yusmeiro Petit making a bid for a perfect game. Down to his last strike, he managed to stroke a single to break up the perfecto, although Petit retired the next batter to complete a 3-0, one-hit shutout. Chavez returned to the Diamondbacks in 2014 but went down with a knee injury in June. By the end of July, Chavez announced his retirement rather than trying to attempt a comeback.

After the 2014 season, he rejoined the Yankees as a special assignment scout, but just as spring training was starting in 2015, the Oakland A's announced that he was joining their cable television broadcast crew as a color commentator. Chavez was a special assistant for the Los Angeles Angels in 2016-2018 when he was named to replace Keith Johnson as manager of the Salt Lake Bees on August 5th. He became eligible for the Hall of Fame in its 2020 election but received only two votes and was dropped from the ballot.