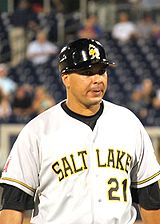 Through 2016, Keith Johnson is the oldest player ever to make his major league debut on his birthday.

After seven season as a minor league manager in the organization of the Los Angeles Angels of Anaheim, from 2008 to 2014, he was named to a position of roving minor league infield instructor in 2015. The Angels promoted him to the major league staff on July 17 in the role of player information coach. He returned to managing in 2016. Johnson again was promoted from AAA manager to the big league Angels' coaching staff on August 6, 2018, staying until the end of the season only. He was scheduled to be the inaugural manager of the Wichita Wind Surge in 2020 before the season was cancelled due to Covid-19. In 2021, he was appointed first base coach of the Miami Marlins.

In addition to managing in the Angels organization, he managed the Salt River Rafters of the Arizona Fall League in 2019.