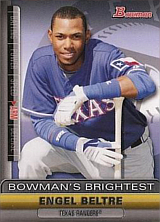 Outfielder Engel Beltré reached the majors with the Texas Rangers in 2013.

Beltré was rated the #2 international amateur prospect by ESPN Deportes in 2006. He was signed by scout Pablo Lantigua for the Boston Red Sox for $600,000. After starting 2007 poorly with the GCL Red Sox (.208/.310/.400 in 34 games, 44 whiffs in 125 at bats), Boston sent him, Kason Gabbard and David Murphy to the Texas Rangers for Eric Gagné. He hit .310/.388/.583 in 22 games for the AZL Rangers and .211/.250/.211 in 9 games for the Spokane Indians. Engel was rated by Baseball America the 2nd-best prospect in the Arizona League after Angel Villalona and Texas's #10 prospect. The Dominican outfielder spent 2008 with the Clinton Lumber Kings, producing at a .283/.308/.403 rate with 9 triples and 31 steals in 42 tries. One bad sign was 15 walks to 105 strikeouts, showing questionable strike-zone judgment. He did lead the Midwest League in hits (160), outfield putouts (273) and runs scored (87) and was third in total bases (228) despite being the youngest player in the league. He was rated by Baseball America the league's #6 prospect, behind Mike Moustakas, Neftali Feliz, Jarrod Parker, Ben Revere and Brett Wallace and right ahead of Andrew Lambo. The publication also ranked him Texas's #7 prospect. He hit .214 in limited action that winter for the Azucareros del Este.

Beltré sputtered in 2009, hitting .227/.281/.317 in 84 games for the Bakersfield Blaze. He injured his right hand and missed over a month, returning to the AZL Rangers for three games and the Frisco RoughRiders for four. Beltré did far better the next year, starting strong with Bakersfield (.331/.376/.460 in 68 games) to earn a promotion back to Frisco. He fell to .254/.301/.337 after the promotion, with one homer in 47 games and a .223 average against right-handers. He finished the year with 8 triples, most in the Texas chain. Had he qualified, he would have tied for third in the California League in average. Baseball America rated him the #5 prospect in the league, after Mike Trout, Brandon Belt, Grant Green and Tyler Chatwood. With Frisco in 2011, Beltré got into trouble when he was caught on tape throwing a trash can into the stands during a game at San Antonio on April 26. The fracas occurred after manager Steve Buechele was ejected for arguing a call, and fans started heckling the visiting Frisco team. Bats were also thrown into the crowd during the incident, but the perpetrators could not be identified. Beltré was handed a 15-game suspension for his actions and faced criminal charges of disorderly conduct.

Engel was the starting center fielder for the Spanish national team in the 2013 World Baseball Classic. He began the season with the Triple A Round Rock Express. After hitting .300 in 72 games for Round Rock, he was called up to the majors and made his big league debut on June 26th, appearing as a pinch runner against the New York Yankees. He made a start in center field the next day and went 2-for-3 versus New York. In 22 big league games that season, he batted .250/.268/.275 with a lone extra base hit in 42 plate appearances. It would be his last taste of the big leagues. He became a minor league free agent after the 2015 season and has popped up in the Mexican League since.