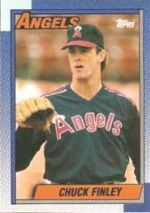 Pitcher Chuck Finley was signed after being drafted in the secondary phase in the January 1985 amateur draft by the California Angels and scout Lou Snipp.

Finley won exactly 200 games in the major leagues. While he never won a Cy Young Award, he was twice second in the league in ERA. Chuck is the only player to have multiple four-strikeout innings, with a total of three under his belt.

He was married to actress Tawny Kitaen, with whom he has two daughters. Their marriage ended in 2002 after she was arrested in a domestic dispute.

He threw a low 90s fastball, a curveball and a forkball.