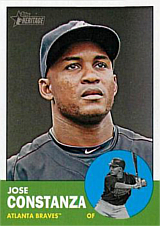 José Constanza was an outfielder for the Atlanta Braves, playing 112 games in four seasons.

Originally signed by scout Josue Herrera for the Cleveland Indians in 2003, Constanza had quite a bit of success in the minors, starting in 2004 when he was named the MVP of the Dominican Summer League. He was an All-Star in the New York-Penn League in 2005, when he hit .263 in 64 games for the Mahoning Valley Scrappers. In 2006, he hit .309 in 120 games between Lake County and Kinston and, in his first season in AAA in 2010, he hit .319 in 113 games for the Columbus Clippers and was named to the International League All-Star team. In 2009, he scored 98 runs for the AA Akron Aeros and stole 46 bases. He topped 20 stolen bases in each of his first seven minor league seasons stateside.

After the 2010 season, Constanza became a free agent and signed with the Braves. After attending spring training with the big club, he was sent to AAA Gwinnett to begin the season. There, he continued to hit well, hitting .312 in 86 games when he got the call. He was named to play in the AAA All-Star Game for the second consecutive year. He finished his first season as a big leaguer batting .303 in 42 games. He saw action in the postseason in 2012 and 2013, finishing a career 1.000 hitter with a triple in the 2012 Wild Card Game off Edward Mujica and an RBI single off Ronald Belisario in the 2013 NLDS. After a 12 game run in 2014, he was outrighted and waived, kicking around baseball in various minor and independent minor leagues through to 2017.