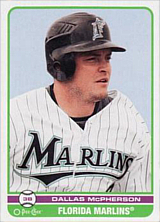 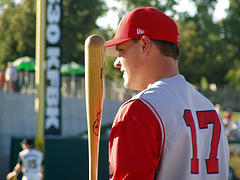 Dallas McPherson, who played five seasons in the majors, was also a noted minor league slugger. He hit 42 home runs in 2008 for the Albuquerque Isotopes.

Dallas, the 2004 minor league home run champion, was actually drafted as a pitcher by the Atlanta Braves out of high school in the 44th round of the 1998 amateur draft before attending The Citadel, where it became clear he was a better hitter than pitcher. McPherson was drafted by the Anaheim Angels in the 2nd round of the 2001 amateur draft. He was signed by scout Marc Russo and began his pro career that summer.

McPherson had back surgery in January of 2007 and missed the season.

McPherson became a manager with the Vancouver Canadians in 2018. He was promoted to the Lansing Lugnuts for 2019.