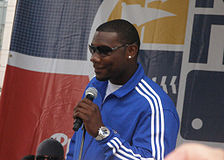 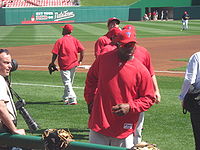 Ryan Howard is a slugger who has set the record for home runs by a second-year player in 2006. He was chosen the 2006 National League MVP.

Howard was selected by the Philadelphia Phillies in the 5th round of the 2001 amateur draft. He was signed by scout Jerry Lafferty and sent to Batavia in the New York-Penn League that summer, where he hit .272/~.385/.456. The year 2002 was spent in Lakewood of the South Atlantic League hitting .280 with 19 home runs. 2003 was at Clearwater in the Florida State League where he cleared a .300 average and a .500 slugging percentage for the first time, posting a line of .304/.374/.514. In 2004, he passed a .600 slugging percentage at both of his stops, hitting .297/.386/.647 in Double A ball at Reading in the Eastern League and .270/.362/.604 at Scranton/Wilkes-Barre in the International League. That got him his first cup of coffee in the majors in September of 2004. Philadelphia had offered Howard to the Pittsburgh Pirates earlier that summer for Kris Benson but Dave Littlefield refused, as the organization felt Brad Eldred was comparable. Benson later was part of a deal for Jose Bautista and Ty Wigginton.

His first stint with the Phillies was pretty good, as he hit .282/.333/.564 in 19 games. The next year, 2005, he did roughly the same in 88 games, hitting .288/.356/.567. That won him the 2005 National League Rookie of the Year Award. It also impressed the Phillies so much that they traded regular first baseman Jim Thome, a prized free agent signing a couple of years earlier, to the Chicago White Sox to free up a position for Howard.

In 2006, he set a Phillies Spring Training record for home runs with 10. The previous record was 9 hit by Dick Allen. He finished the season with 58 home runs, a record for a second-year player, and the highest total in Major League Baseball that year. He also led the National League in Total Bases (383) and RBI (149) as he established himself as one of the game's most-feared sluggers. In spite of his mighty swing and 181 strikeouts, he still managed to post an impressive batting average of .313 - good for 9th in the league, while rapping 182 hits, a remarkable total for a slow power hitter. He also won the Home Run Derby held at the All-Star Game in Pittsburgh. He was the fastest player ever to reach 7- career homers, needing just 233 games, although that record was beaten by Aaron Judge in 2018. After the season, he was voted the National League Most Valuable Player. He was the last major league player to hit as many as 55 homers until Giancarlo Stanton reached the mark in 2017.

Howard won a $10 million arbitration case in 2008, setting a record for a first-year eligible player; Alfonso Soriano had previously won $10 million as well.

Howard ruptured his achilles tendon while making the final out of Game 5 of the NLDS in 2011 and collapsed on the ground as the Phillies were eliminated by the St. Louis Cardinals. He had surgery on October 12th , with a recovery time estimated at 5 to 6 months, making him doubtful for the start of the 2012 season. Indeed, in late January, GM Ruben Amaro Jr. stated that he was not expecting Ryan to be back in the line-up before May. That turned out to be overly optimistic, as Ryan only returned to the line-up on July 6th, when he went 2 for 4 with a double in a 5-0 loss to the Atlanta Braves. His forgettable season ended on a whimper when on September 28th, he dropped the lead pipe he used for practicing his swings in the on-deck circle, fracturing a toe. He ended the year with a .219 average in 71 games, with 14 homers and 56 RBI, showing that his power was still present. He did hit the 300th home run of his career that year, doing so in his 1,093rd game. Only Ralph Kiner had done so faster (by just six games).

Howard seemed ready to have a big season in 2013 as he hit .284 with 16 RBI in April, but he fell to .179 in May and then was bothered with knee problems, leaving his status as day-to-day while Delmon Young took his place at first base. He was limited to 80 games and 286 at-bats, hitting only 11 homers with a .266 average as the Phillies had a forgettable season. He was back healthy and playing every day in 2014, although he was no longer the dominant force he had once been with the bat. After two months, he was leading the National League in strikeouts and was hitting only .230 at the end of May. Still, he drove in the 1000th run of his career with a homer on May 31st, becoming only the fourth player in Phillies history to reach the mark. He had needed only 1230 games to compile those RBIs, fewest among active major leaguers at the time. On July 23rd, his average stood at .224 with 15 homers and 60 RBIs when manager Ryne Sandberg announced that he would be benched in favor of young Darin Ruf amidst speculation that the big slugger could be dealt at the trading deadline with the Phillies already out of the running in the NL East. That didn't last however, and Howard ended up playing 153 games, most since 2009, and hitting 23 homers and driving in 95 runs even though he hit only .223. He led the league 190 strikeouts and his OPS+ was only 93. By then the Phillies, in full rebuilding mode, were looking for a team on which to unload the remainder of the slugger's contract, but had difficulty finding suitors given the $61 million remaining on Howard's contract and his diminishing production. Howard was still with the Phillies in 2015, his big contract making him unmovable, and he hit only .229 with 138 strikeouts in 129 games, but with still some power: 29 doubles and 23 homers. It was another lost season for the Phillies, as Sandberg quit in mid-season and was replaced by Pete Mackanin while the team ended up in last place in the NL East. In December, a controversial documentary appeared on the Al-Jazeera news channel, entitled The Dark Side, listing Howard and Ryan Zimmerman of the Washington Nationals among a number of athletes accused of having taken performance-enhancing drugs. Both players strongly denied the allegations, and they sued the network for defamation in early January, 2016. However, the story led some reporters to speculate that the Phillies would actually be better off if the story were true, since Howard was only hurting them by being in the line-up at this point of his career, and a suspension would give them a chance to either not play him or to attempt to void the remainder of his contract. That said, the contract was so bad by this point that the Phillies may still have been better simply swallowing the sunk costs and moving on, no matter what.

The media firestorm died down quickly however, and Howard headed into spring training in 2016 convinced he could still help his team as an everyday player. However, the numbers showed that he hit only .103 against lefthanders in 2015, after years of falling production against southpaws, making his assertion that he was not a platoon player by this point of his career a bit presumptuous. He did start for the first couple of months, but his situation became more tenuous when the Phillies brought up rookie Tommy Joseph in late May. Joseph hit very well in limited opportunities while Howard was hitting an awful .150 even though he had belted 9 homers in early June, giving manager Pete Mackanin little choice but to announce on June 10th that he was giving the starting job to the rookie. He played 112 games in what turned out to be his final season for the Phillies, hitting .196 with 25 homers and 59 RBIs. He became a free agent after the season and did not find any interest from another team until the following April, when he signed a minor league deal with the Atlanta Braves. The deal was only worth a pittance by his standards, but he made it clear that the only thing he wanted was another chance to play. He was to go to extended spring training before reporting to the AAA Gwinnett Braves. However, he lasted only 11 games, hitting .184, before the Braves handed him his release on May 8th, which likely marked the end of the road for him as a player, although, for his part, he said that he was not ready to give up baseball just yet. Indeed, on August 12th, it was announced that he had signed another minor league deal, this one with the Colorado Rockies. He reported to the AAA Albuquerque Isotopes where he hit .192 in 16 games, with his final three professional homers. He became a free agent after the season and deicded to retire.

Howard chose to hire his twin brother, Corey, to handle his business interests, supposedly at the urging of his father, Ron, who wanted to keep the work - and the money - in the family. As a result, Corey, Ron, and Ryan's mother Cheryl, were all employed by "RJH Enterprises". However, it did not end well, as Ryan terminated his brother's contract in July of 2013, which prompted Corey to sue for wrongful termination and Ryan to counter-sue with allegations of fraud and mismanagement. The matter was settled out of court in November of 2014. For his post-playing career, Howard decided to become a partner in a venture capital fund, SeventySix Capital, based in Radnor, PA, which invests in innovative technologies and companies.