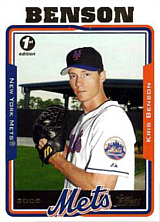 “Just because I went on the Howard Stern show last year and said that if my husband was unfaithful to me I’d sleep with everybody on the team, including the ball boys!... I was talking about infidelity. I have to come up with stupid humor to be understood by these idiots who take everything so literally. All these big-time athletes who cheat and get away with it! W hy should we put up with that (blank)? It’s time for us to get back to traditional values!” - Anna Benson, The New Yorker, 2005

In spite of being one of the most successful major league pitchers taken with the first overall pick in the amateur draft, Kris Benson had a rocky career marred by injury and controversy over his personal life.

Kris joined the Clemson Tigers when they were one of the top programs nationally. In his freshman year, he was one of their least effective hurlers, going 7-3 with one save and a 4.24 ERA. Only two of the 12 pitchers with 10+ games on the staff had worse ERAs - one of them was fellow future big leaguer Billy Koch (4.62), good company. In 1995, the sophomore improved to 8-3, 3.20 with a 23/79 BB/K ratio in 79 innings, but 75 hits allowed. After putting on 15 pounds of muscle in the weight room, Benson had a dazzling junior year. He started with a 3-hit shutout of the University of South Florida with 14 strikeouts and no walks in the opener and went 14-2 with a 2.02 ERA overall. He whiffed 204 in 156 innings, walking only 27 and allowing just 109 hits. Six times, he struck out 10 or more without walking a batter, including a 17 strikeout, 2-hit game against Virginia Tech. He led the Atlantic Coast Conference in wins and strikeouts and was second to Seth Greisinger in ERA. He was named the ACC All-Conference starting pitcher and the ACC Player of the Year, finishing 6th in NCAA Division I in ERA, tying for fourth in wins, tops in innings pitched and second to Evan Thomas in strikeouts (and 30 ahead of the #3 man, Eric DuBose). He was 5th in K/9, trailing Thomas, Jason Ramsey, Koch and Eric Milton. He won the Baseball America Player of the Year, Dick Howser Trophy, Rotary Smith Award, Collegiate Baseball Player of the Year and ABCA Player of the Year and was a consensus first-team All-American. Koch said Clemson teammates called him "The Messiah". Unfortunately, he dropped two decisions in the 1996 College World Series.

In the 1996 Olympics, Benson was 2-1 with a 5.82 ERA, striking out 17 in 17 innings and outperforming Koch at least, though he was one of the staff's least effective arms. He dropped an 11-2 decision to Japan that kept the US from the Gold medal game, settling for a Bronze. Undaunted by his Olympic performance, the Pittsburgh Pirates made Kris the first overall selection of the 1996 amateur draft and signed him for a $2 million bonus. 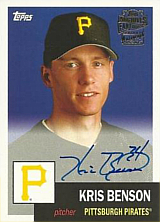 Baseball America named Benson the #1 prospect in Pittsburgh's system before he played a game in the minors. He split his first year between the Lynchburg Hillcats (5-2, 2.58, 13/72 BB/K in 59 1/3 innings) and the Carolina Mudcats (3-5, 4.98, 32/66 BB/K in 68 2/3 innings along with 81 hits allowed). Baseball America rated him the #2 prospect in the Carolina League behind Russell Branyan and right ahead of Lynchburg's star, and league MVP, Aramis Ramirez. He was also named the #6 prospect in the Southern League by the same publication. Benson was hit hard in his Triple A debut in 1998. With the Nashville Sounds, he was 8-10 with a 5.37 ERA. He struck out 129 batters in 156 innings, walked 50 and allowed 162 hits. Baseball America still rated him having the best breaking pitch in the Pacific Coast League and the #3 Pirates prospect behind Chad Hermansen and Warren Morris.

Benson was a surprise success in making the 1999 Pirates rotation after the year he had with Nashville; his path was eased by a spring training injury to Jose Silva. On April 9, Benson beat the Chicago Cubs to become the second #1 overall pick to win his first game (high school phenom [David Clyde]] had been the first). Kris had a solid 11-14, 4.07 rookie year with a 112 ERA+ and finished fourth in 1999 National League Rookie of the Year Award voting behind Scott Williamson, Preston Wilson and Morris. He was 9th in the 1999 NL in fewest hits per 9 innings (8.42) and tied for fourth in losses. Kris followed with his best season in a solid 2000, going 10-12 with a 3.85 ERA (119 ERA+). He tied for 9th in the 2000 NL with 217 2/3 innings pitched and tied for 9th with one shutout.

On March 8, Pittsburgh signed Benson for a four-year, guaranteed $13.8 million deal. Kris and his family had moved to the city earlier and shown intentions to settle there. Less than a couple weeks later, Kris got into his first major controversy when he and his wife Anna were interviewed in Penthouse Magazine and gave explicit details about their private lives. It would be the first of many times that Kris and Anna (especially the latter) aired the family's private laundry in public. Only a couple days later, Kris badly sprained his right elbow. He had elbow-ligament transplant surgery and subsequently missed the entire 2001 season.

Benson started 2002 with the Altoona Curve and won his lone start, striking out seven and allowing one run in 7 innings. Moving up to Nashville, he finally saw success in Triple A, going 0-2 but with a 1.53 ERA, 25 strikeouts and a .133 opponent batting average in 17 2/3 innings. Returning to Pittsburgh, Kris had a 9-6, 4.70 record; opponents hit .295 against him. He improved as time went by, starting 0-4 with a 7.79 ERA in 8 starts then was 9-2 with a 3.57 ERA in his last 17 starts, and was looking to have fully recovered. In 2003, Kris struggled and tendonitis in his right shoulder ended his season after July 17, when he wa 5-9 with a 4.97 ERA for the 2003 Pirates, unable to build upon his hot 2002 finish. He started the 2004 season 8-8 with a 4.22 ERA (98 ERA+) in Pittsburgh. All summer long, trade rumors surrounded him. The most notable, in retrospect, was a deal for Ryan Howard; some sources say it was nixed by Phillies GM Ed Wade while others say the Pirates wanted more than just Howard. A report in the August 19, 2007 Pittsburgh Post-Gazette by Dejan Kovacevic indicated that the main reason it fell through (according to close sources) was Pittsburgh felt Brad Eldred was comparable to Howard and they did not need another young power-hitting prospect. And so, on July 30, he was traded with Jeff Keppinger to the Phillies' division rival, the New York Mets, for Jose Bautista, Ty Wigginton and Matt Peterson.

Benson was 4-4 with a 4.50 ERA down the stretch for the 2004 Mets. Kris and his wife had founded "Benson's Battalion" after the September 11 attacks of 2001 to help police organizations, fire departments and other public service groups. In November 2004, the organization donated $350,000 to the NYPD for equipment. In 2005, the right-hander was 10-8 with a 4.13 ERA. His strikeout rate was far below what it had been five years earlier, but his 101 ERA+ was his best since 2000. Before the 2006 season, the Mets dealt him to the Baltimore Orioles for prospects John Maine and Jorge Julio, as Baltimore sought veteran leadership to help a young staff. Anna Benson would claim that New York traded him due to her negotiations to pose nude for Playboy, but the Mets denied this. 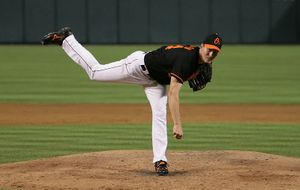 Benson went 11-12 with a 4.82 ERA (94 ERA+) for the 2006 Orioles. Though he was 4th in the 2006 AL in homers allowed (32), he was generally Baltimore's #2 or #3 starter after Erik Bedard and, possibly, Daniel Cabrera. John Maine, the throw-in to the Benson deal with the Mets, had a much better year, briefly becoming one of the Mets more reliable starting pitchers. In February 2007, Kris was diagnosed with a torn rotator cuff in his right shoulder. He had surgery and missed all of the 2007 season. Baltimore signed fellow former Met Steve Trachsel to take his spot on the staff.

Benson was signed by the Philadelphia Phillies as a minor league free agent for 2008. He spent all year in the minors, pitching poorly for the Lehigh Valley IronPigs (1-4, 5.52, .344 opponent average in 11 games) and Clearwater Threshers (0-2, 8.10, .323 average in 2 games). After three years away from the majors, he returned with the Texas Rangers at the start of the 2009 season. In his first game back, he was shelled for 8 runs on 10 hits in 5 innings in a 15-2 loss to the Tigers. His comeback was limited to 8 games, as injuries befell him again, leaving him with a record of 1-1, 8.46. He attempted another comeback with the Arizona Diamondbacks in 2010, but that lasted only 3 games, in which he again went 1-1. On January 10, 2011, frustrated by his never-ending string of shoulder and elbow maladies, Benson told ESPN that he was retiring. He added that the hard work he had put in over the past two years to work himself back into condition and make a major league roster, only to be injured again after a few games, had become too much, and that he did not want to go through it again. He retired with an overall record of 70-75 and a 4.42 ERA over 206 games, all but 6 of them starts.

He made the news again in July 2013, albeit unwittingly, when his wife, Anna, with whom he had become estranged, was arrested after confronting him with a loaded handgun on the back porch of the home they once shared in Smyrna, GA. She had apparently come looking to ask her former husband for money, wearing a bullet-proof vest in addition to various weapons on her person. She managed to enter the home through the garage and confront Benson, who escaped and called police, who arrested Anna. She was charged with criminal trespass and aggravated assault with a weapon, later pleading guilty and being sentenced to 15 years probation. At one time after all of this, Benson was engaged to Brittany Page, daughter of professional wrestler and WWE Hall of Famer Diamond Dallas Page.