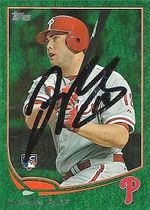 Ruf attended Creighton University, where he was named Missouri Valley Conference Player of the Year in 2007. He was then selected by the Phillies in the 20th round of the 2009 amateur draft and signed by scout David Seifert. He began his pro career that summer with the GCL Phillies, hitting .326 in 20 games before being promoted to the Williamsport Crosscutters. In 37 games at that level, he .301 with 3 home runs. He began 2010 with the Lakewood Blue Claws and hit .330 in 32 games with them. About a month into the season, he was promoted to the Clearwater Threshers, for whom he hit .277 with 5 homers in 97 games.

Back with Clearwater in 2011, Ruf hit .308 with 17 home runs, and 82 RBI while leading the Florida State League with 43 doubles. With the AA Reading Phillies to start 2012, he hit .317, led the Eastern League with 38 homers and 104 RBI, and was named circuit MVP. This earned him a September call-up to Philadelphia, and he made his big league debut on September 14th against the Houston Astros. Entering the game in the 9th inning as a pinch hitter for pitcher Justin De Fratus, he hit a pop fly to end the inning. He hit .333 in 12 games during his first taste of the majors.

The Phillies wrote him off at that point, and on November 11, 2016, he was traded to the Los Angeles Dodgers alongside IF Darnell Sweeney in return for veteran IF/OF Howie Kendrick. However, he never played for the Dodgers, instead joining the Samsung Lions of the Korea Baseball Organization in 2017. It was a good move on his part as he had an excellent season: in 134 games, he hit .315 with 38 doubles, 31 homers, 90 runs and 124 RBIs. He has continued to play in South Korea in 2018 and 2019.