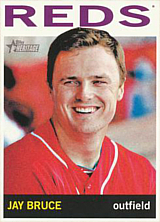 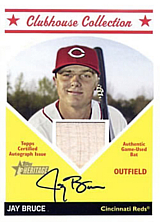 Outfielder Jay Bruce was taken by the Cincinnati Reds in the first round of the 2005 draft and signed by scout Brian Wilson. He made his debut that summer with the GCL Reds, where he hit .270 with 5 home runs in 37 games before being promoted to the Billings Mustangs, where he hit .257 with 4 homers in 17 games. He spent the entirety of 2006 with the Dayton Dragons, hitting .291 with 16 home runs and 81 RBI. 2007 was a big year for him. He was the US's right fielder in the 2007 Futures Game, joining Jacoby Ellsbury and Justin Upton in the outfield. He hit 7th and went 1 for 3 with a triple. After beginning at Class A (Sarasota) (where he hit .325 and slugged .586), Jay was promoted to Double A (Chattanooga) where he proceeded to bat .333 and slug .652. Still only 20, Bruce was promoted once again, to Triple A Louisville, where he batted .305/.358/.567. He was named 2007 Minor League Player of the Year by Baseball America.

Bruce hit .364/.393/.630 with 34 runs and 37 RBI in 49 games for Louisville to open 2008 and was called up to The Show. His major league debut was stunning as he reached base in all five plate appearances. Batting second and playing center field against Pittsburgh, Bruce drew a walk from Ian Snell in his first plate appearance, then stole second. In the third, he singled against Snell. He drew another walk in the 5th and scored on an Adam Dunn homer. In the 6th, he singled off Dámaso Marte to score Paul Bako. The next inning, Bruce doubled against Marino Salas to drive home Bako again. He drew another walk in his first plate appearance in his next game before his streak of reaching base safely ended at six. It was the longest such streak to begin a career since Ted Cox reached base in his first seven plate appearances in 1977. He continued his scintillating start with a 4-for-5 night against the Atlanta Braves on May 30, doubling home the tying run and scoring the game-winner in the 11th. He became the second big leaguer (since 1969) to finish with a 1.000 slugging percentage in his first six games, matching Mike Jacobs of the 2005 New York Mets. In his first full week, he batted 15-for-26 (.577) with 3 homers, 3 doubles, 12 runs scored and 7 RBI. He eventually cooled, finishing his rookie campaign .254/.314/.453 with 21 homers and 52 RBI, placing 4th in Rookie of the Year voting.

Jay posted an almost similar line in 2009 (.223/.303/.470, 22 bombs, 58 RBI) while missing two months with a broken wrist suffered making a diving play against the Mets. In 2010, his walk-off home run against Tim Byrdak of the Houston Astros on September 28 won the Reds the National League Central and sent them back to the postseason for the first time since 1995. He batted a career-best .281 with 25 homers and 70 RBI. In the offseason, the Reds locked him up with a six-year, $51 million extension. He started slow in 2011 before coming on strong in May, earning National League Player of the Month honors after batting .392 with 12 big flies and 33 RBI. He earned his first National League All-Star berth finishing .256/.341/.474 with 32 homers and 97 RBI. That September, he reached 100 homers the third fastest in Reds history behind some elite company: Hall of Famers Johnny Bench and Frank Robinson. It was a return engagement to the All-Star Game for Jay in 2012. During the last week of April, he scorched pitching to the tune of a .476 average, 1.143 slugging percentage, 4 home runs and 24 total bases. He batted .252/.327/.514 with 34 homers (3rd best in the circuit), 74 extra base hits (4th best) and 99 RBI. He took home his first Silver Slugger award with his strong performance, with his second coming in 2013 on the strength of a .269/.329/.478 performance. He reached the 30 home run plateau for a third consecutive year, mashing 30 on the nose, while finishing second in RBI with 109 and third in doubles with a career-best 43. His bat cooled down in 2014, and he missed some time due to surgery to repair a torn meniscus. While he only batted .217/.281/.373 with 18 homers and 66 RBI, he did establish a career best mark in stolen bases, swiping 12 bags. Prior to the 2015 season, the Reds were prepared to flip him to the Toronto Blue Jays as part of a three-team deal with the Los Angeles Angels that fell apart due to issues with physicals. On June 17, 2015, Bruce had five hits in a game against the Detroit Tigers, becoming the first Reds player to collect that many since Willy Taveras in 2009. He reached his 200th homer while finishing .226/.294/.434 with 26 bombs and 87 RBI.

With his name featuring in a number of trade rumors in late July 2016, he hit a home run in five straight games from July 23-27. He had been selected to the All-Star team (as an injury replacement for Dexter Fowler) for the third time earlier that month. He was leading the National League with 79 RBI at that point. He was traded on August 1st, heading to the New York Mets, in return for Dilson Herrera and Max Wotell. In his first game for the Mets, he went 0 for 4 playing right field and batting third in a 7-1 win over the New York Yankees on August 2nd. His first heroics came August 4th, when he launched a three-run homer for his first hit in his new uniform after starting 0-for-10; the blast came against Nathan Eovaldi of the Yankees and helped the Mets to a 4-1 win. He hit only .219 in 50 games as a Met and earned some boos from the Citi Field faithful as a result, although he did hit 8 homers and drive in 19 runs. Combined with his excellent start, that gave him for the year 33 homers and 99 RBI to go along with a .250 average. He went 0 for 3 as the Mets lost the Wild Card Game to the San Francisco Giants. There was some question about whether the Mets would retain him for 2017, but they did keep him, even though they also re-signed Yoenis Céspedes. He headed into the season as the projected right fielder, and as an insurance policy at first base were Lucas Duda not to be fully recovered from the injury that cost him most of the previous season. 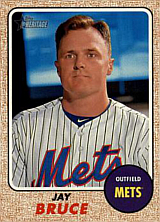 Bruce hit well for the Mets in the first half of 2017. He was at .266 with 23 homers and 59 RBI at the All-Star break, making him the most productive hitter on the team alongside Michael Conforto, their lone All-Star. The Mets were headed down the road to nowhere, and with his contract ending after the season, it was widely speculated he would be dealt. On August 9th, he was sent to the Cleveland Indians, who had just lost Michael Brantley to an ankle injury. The Mets only received marginal prospect Ryder Ryan in return, as Cleveland was assuming most of Bruce's remaining salary. Jay was a hero on back-to-back days with the Indians as they put together the longest streak of consecutive wins in major league history in late August and early September. On September 13th, he hit a three-run homer off Buck Farmer of the Detroit Tigers in the 1st inning to erase an early 1-0 deficit and send Cleveland on its way to a 5-3 win, its 21st in a row. Then, the next day, he popped up with one out and the bases loaded with the Royals trailing, 2-1, in the 8th, but after his teammates tied the game in spectacular fashion in the 9th, he came to bat again in the 10th with Jose Ramirez on second and Edwin Encarnación on first; he lashed a pitch from Brandon Maurer into the right field corner and it bounced into the stands for an automatic double, giving Cleveland its 22nd straight win, the longest such streak without any ties in major league history. He hit .248 with 7 homers and 26 RBI in 43 games for the Indians, giving him a career-high 36 homers and a second 100 RBI season. As the team's starting right fielder in Game 1 of the ALDS against the New York Yankees on October 5th, he had a hand in all four runs of a 4-0 win: he doubled and came in to score on a double play grounder in the 2nd, hit a two-run homer off Sonny Gray in the 4th, and added a sacrifice fly against Jaime Garcia in the 6th. But the Indians were knocked out by the Yankees in five games. Following the season, Bruce became a free agent and, on January 10th, agreed to a three-year deal worth $39 million to return to the Mets in 2018. He had a disappointing season, like most of the team, being limited to 94 games during which he hit .223 with 9 homers and 37 RBI. Following the season, the Mets decided to get rid of him, forcing the Seattle Mariners to take him and the remainder of his contract to balance some of the salary obligation in a blockbuster trade that landed them All-Star second baseman Robinson Cano and closer Edwin Diaz. Joining Bruce was reliever Anthony Swarzak and three prospects, Gerson Bautista, Justin Dunn and Jarred Kelenic.

Jay's first game for the Mariners took place in Japan, at the Tokyo Dome, on March 20, 2019, as the M's opened their season with a two-game series against the Oakland Athletics across the Pacific Ocean. He had the honor of getting the first hit of the major league season, as he singled off Mike Fiers in the top of the 1st. He got off to a great start power-wise, with 9 homers and 17 RBI in March/April, even if his average was just .187. On May 31st, he hit the 300th homer of his career in a 4-3 win over the Los Angeles Angels. Two days later, on June 2nd, with the Mariners in a free fall, he was traded to the Philadelphia Phillies for minor leaguer Jake Scheiner. He was hitting .212 with 14 homers and 28 RBI in 47 games. His acquisition became even more crucial when, the day after his acquisition, Andrew McCutchen was the victim of a season-ending knee injury. Jay quickly made his presence in the lineup felt; on June 4th, he homered twice and drove in 6 runs in a 9-6 win over the San Diego Padres. In fact, he homered four times in his first four games for the Phils, something no one had done in team history. He went on the injured list on July 17th with an oblique strain. He returned on August 8th, but just for one game, as he strained his hip flexor that day and had to go right back on the IL. Bruce finished a disappointing .221/.235/.510 for the Phils, contributing 12 bombs and 31 RBI in 145 at bats while struggling to get on base. He returned to the Phils in 2021 and played 32 games of the season shortened to 60 games by the Coronavirus pandemic, hitting just .198 with 6 homers and 14 RBIs.

It looked like Bruce had hit the end of the road after his two disappointing seasons with the Phillies, and at 34, all he was able to find for 2021 was a minor league contract with the New York Yankees. His chances of making the team appeared minimal until, a few days before the start of the season, 1B Luke Voit had to undergo surgery for a meniscus tear, opening a spot for him on the roster as his temporary replacement. However he got off to a poor start and the Yankees acquired Rougned Odor to fill his spot in the line-up and play second base, with D.J. LeMahieu sliding over to first base. Disappointed by his performance, Bruce announced that he would retire at the end of the game of April 18th. He did not appear in that day's game and ended in stint in pinstripes with a .118 average and 1 homer.