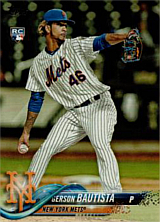 Pitcher Gerson Bautista was originally signed as an amateur free agent by the Boston Red Sox on April 1, 2013. On July 31, 2017, he was one of three prospects the Red Sox sent to the New York Mets in return for P Addison Reed. He was still pitching in A ball at the time, and while he had shown some great stuff, he had yet to put up any eye-popping numbers in the minors: his highest win total in any season from 2013 to 2017 was 3, he had never collected more than 73 strikeouts or pitched more than 61 innings, the latter coming in his first pro season, with the DSL Red Sox.

In spite of this lack of professional success, the Mets puts Gerson on the fast track to the majors in 2018, and after 6 appearances with the Binghamton Rumble Ponies of the AA Eastern League, he was called up to make his major league debut on April 17. He went 0-1, 12.46 in 5 games as a reliever, showing he was not quite ready for the level, and spent the bulk of the season in AAA with the Las Vegas 51s. In 31 games, he was 3-1, 5.22 with 3 saves. He did strike out 54 batters in 39 2/3 innings but also walked 18 batters. Following the season, on December 1, he was one of three prospects, along with Justin Dunn and Jarred Kelenic, to be sent to the Seattle Mariners in the blockbuster deal that brought second baseman Robinson Cano and closer Edwin Diaz to New York. Joining the three youngsters were two veterans who had disappointed in their first season with the Mets after signing as free agents, outfielder Jay Bruce and reliever Anthony Swarzak.