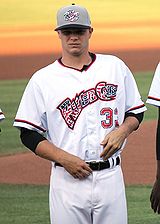 Sonny Gray was a first-round pick in the 2011 amateur draft.

Gray was a two-sport star in high school. He hit .518 as a senior while fanning 78 in 35 innings and posting a 4-0, 0.79 record. He also was the quarterback in football, taking his team to two state titles. He played in the AFLAC All-American game. Baseball America ranked him as the #52 prospect entering the 2008 amateur draft. Due to a strong college commitment, he fell to the 27th round before the Chicago Cubs picked him. He did not sign.

Gray was 5-1 with 5 saves and a 4.30 ERA as a college freshman. He was with Team USA that summer, going 3-1 with a 0.75 ERA and .139 opponent average; the team did not play in any major international tournaments. In 2010, the sophomore improved to 10-5, 3.48 with 113 K in 108 2/3 innings, though he walked 48. He finished third in the Southeastern Conference in whiffs, tied for 22nd in NCAA Division I. He was again with Team USA, striking out 37 and walking 4 in 24 innings and went 3-0 with a 0.38 ERA. Baseball America named him their Summer Player of the year, the third Vanderbilt southpaw to take that honor in a five-year period, following David Price (2006) and Mike Minor (2008). In the big event, the 2010 World University Championship, he fanned 14 in a one-hit, no-walk, 69-pitch, five-inning complete game shutout of Sri Lanka (a mercy rule contest). In the semifinals, he limited Japan to two runs (one earned) in seven innings before Noe Ramirez wrapped up the win. He beat the heralded Yuki Saito in an event held in Tokyo. The USA wound up with the Silver Medal, losing to Cuba in the finale. Gray led Team USA in both wins and Ks (20) in the event. He tied Yadier Pedroso for the most wins in the Championship while leading in whiffs (two ahead of Miguel González). González beat him out for the award as the All-Star starting pitcher.

His junior year, Gray helped Vanderbilt make it to the 2011 College World Series. Entering the Series, he was 12-3 with a 1.97 ERA, 119 strikeouts and a .191 average allowed in 114 1/3 innings. He had walked 41. The Oakland A's took him with the 18th pick of the 2011 amateur draft; fellow Vanderbilt starter Grayson Garvin went later in the first round.

Gray was signed by scout Matt Ranson for $1.54 million for Oakland and made his pro debut with the AZL Athletics. He was then promoted to the AA Midland RockHounds, where he went 1-0 with an 0.45 ERA in 5 starts. He spent most of the 2012 season back at Midland, going 6-9, 4.14 in 26 games. He also made one appearance in AAA with the Sacramento RiverCats, giving up 4 runs in as many innings. He started 2013 with Sacramento and was 8-5, 2.61 after 16 starts when he got the call to Oakland on July 10th. He had 107 strikeouts against 34 walks in 102 1/3 innings. In his debut, he pitched two inning in a loss to the Pittsburgh Pirates, giving up a hit and striking out three. He made another relief appearance, then returned to the minors for a while and was back in Oakland to stay on August 10th, when he made his first big league start. He was a 5-4 loser to the Toronto Blue Jays that day, but stayed in the rotation until the end of the year, making 10 starts and pitching quite well. He finished the year at 5-3, 2.57, allowing only 51 hits in 64 innings, while striking out 67. The A's tabbed him to start Game 2 of the ALDS against the Detroit Tigers on October 5th and he went toe-to-toe with Justin Verlander, giving up no runs on 4 hits in 8 innings. The game was still scoreless when he was replaced by Grant Balfour to start the 9th, and the Australian closer was credited with the 1-0 win when Stephen Vogt drove in Yoennis Cespedes against Rick Porcello for the winning run in the bottom of the 9th. Given his great performance, he was given the ball for the decisive Game 5 on October 10th, but things did not go as well. Verlander had another superlative performance, giving up no runs in 8 innings, while Sonny coughed up 3 in 5 innings to get tagged with a 3-0 loss.

Gray was back in the A's starting rotation at the beginning of 2014. On April 28th, he pitched his first career complete game and shutout when he defeated the Texas Rangers and ace Yu Darvish, 4-0, to improve to 4-1 for the month. He was named the American League's Pitcher of the Month, finishing with a 1.76 ERA and 37 strikeouts in 41 innings. He was again the Pitcher of the Month in July as he went a perfect 5-0 with a 1.03 ERA in 5 starts, his performance going a bit under the radar as the A's were busy acquiring starting pitchers during the period, adding Jeff Samardzija, Jason Hammel and Jon Lester to their starting rotation. For all of the pricey acquisitions, it was Gray who saved the A's season by tossing a six-hit shutout against the Texas Rangers on the final day of the regular season, September 28th, the 4-0 win securing the second wild card slot for the A's. They finished only one game ahead of the Seattle Mariners, after posting the best record in the majors over the first half of the season. Gray finished the season at 14-10, 3.08 in 33 starts, pitching 219 innings and recording 183 strikeouts.

Sonny was outstanding as the A's opening day starter on April 6, 2015. He held the Rangers hitless through 7 innings before Ryan Rua led off the 8th with a single, breaking his bid to match Bob Feller's feat of pitching a no-hitter on opening day. Gray settled for credit for an 8-0 win, in which he gave up only that hit and a walk in 8 innings. Incidentally, the win ended a ten-year streak of losing on opening day for the A's. He was one of the few bright lights as the A's could not get on track in the early going. Thanks to an 8-1 win over the Los Angeles Angels of Anaheim on June 14th, he improved his record to 8-3 and lowered his ERA to 1.60, best in the majors at that point, even though the A's were in last place in the AL West. He ended the first half by pitching a two-hit shutout in a 2-0 win over the Cleveland Indians. He had been named to the All-Star team a few days earlier, but had to bow under the Sunday Starter rule. He finished the first half at 10-3, 2.04. He threw another shutout on July 28th, this one a three-hitter in a 2-0 win over the Los Angeles Dodgers. the A's had a very tough second half, however, eventually ending up in last place, and as a result he only won four more games after the All-Star break. Still, his record of 14-7, 2.73 was excellent.

Sonny was slated to be the A's opening day starter on April 4, 2016, but a bout of food poisoning sent him to hospital and Rich Hill had to fill in for him at short notice. He made his season's debut two days later. He struggled with his command in the early weeks, capping it with an outing against the New York Yankees on May 21st in which he made three wild pitches and walked four in 3 1/3 innings. Two days later, he was placed on the disabled list with a strained muscle in his back. Overall, it was a season to forget as he finished at 5-11, 5.69 in 22 starts. However, he bounced back in 2017, even though he was still pitching in front of a struggling team. In 16 starts for the A's, he was 6-5, 3.43, and his name was continually mentioned in trade rumors starting in late June, as he was clearly one of the better starting pitchers available to a contender willing to pay the price at the trading deadline. It took until July 31st for the expected trade to be finalized, and the winners of the lottery were the New York Yankees, who gave up prospects Dustin Fowler, James Kaprielian and Jorge Mateo to bring him on board; a sure sign that Oakland was focusing on the distant future at that point was that two of the prospects - Fowler and Kaprielian - were out for the rest of the season with injuries at the time of the trade. he made 11 starts for New York, going 4-7, 3.72 to finish the year at 10-12, 3.55. he was given a chance to pitch in the postseason as well, making a start each in the Division Series against the Cleveland Indians, and another in the ALCS against the Houston Astros. The first of these ended up in a loss as he allowed 3 runs in 3 1/3 innings, but the second was better, in Game 4 of the ALCS on October 17th, as he limited the Astros to 2 runs - 1 earned - in 5 innings and New York eventually won the game, 6-4.

He returned as a member of the Yankees' starting rotation in 2018 even if he had failed to fully live up to expectations after his acquisition. It quickly became evident that he was a weak link in an otherwise very strong Yankees team as he was just 1-2, 6.67 in 6 starts in March/April, and 2-2, 5.16 in May. He pitched somewhat better the next two months, but the fact that they Yankees acquired two veteran starting pitchers at the trading deadline in J.A. Happ and Lance Lynn was definitely not a vote of confidence. In his next start on August 1st, he was hit hard by the lowly Baltimore Orioles, allowing 7 runs in just 2 2/3 innings to be saddled with a loss, and increasing speculation that he may soon be unceremoniously dumped. Even worse, it was revealed that in the wake of recent scandals involving baseball players having made racist or homophobic comments in social media, he had hastily deleted a few posts from his own accounts. The difference was that the earlier incriminated players had made their stupid declaration when they were back in high school, but that Gray's had been made after he had turned professional. The following day, the Yankees announced that Gray would move to the bullpen for the time being, with Lynn taking his starting spot. He did get a chance to make a spot start on August 25th, in the second game of a doubleheader against the Orioles, and this time did well, with 6 1/3 scoreless innings to send the Yank on their way to a 5-1 win and a sweep of the twinbill. He finished the year at 11-9, 4.90, with 23 starts in 30 appearances and 130 1/3 innings pitched. He was not used in the postseason.

It was clear that Gray was not in the Yankees' plans for 2019, but he was not necessarily easy to trade as the Yanks still wanted to extract a bit of value and not have to swallow all of his remaining contractual obligations. A deal was finally worked out on January 21st, when he was sent to the Cincinnati Reds along with P Reiver Sanmartin in return for infield prospect Shed Long and a Competitive Balance Round A pick in the 2019 amateur draft. The Reds then immediately signed him to a three-year extension through 2022 worth $30.5 million. This deal also reunited him with his former pitching coach at Vanderbilt, Derek Johnson, who was now the Reds' pitching coach. He was an All-Star in his first season with the Reds, going 11-8 with an excellent ERA of 2.87 in 31 starts and a career-high 205 strikeouts in 175 1/3 innings. In 2020, he went 5-3, 3.70 in 11 starts in the season that was cut to just 60 games by the Coronavirus pandemic. The Reds made it to the postseason that year, but he did not get to play as he was the third starter behind Trevor Bauer and Luis Castillo and the Reds lost both of their Wild Card Series games against the Atlanta Braves. In 2021, he fell to 7-9, 4.19 as the Reds faded down the stretch and lost what looked to be a certain postseason slot to their division rivals, the St. Louis Cardinals. Sonny made 26 starts and logged 135 1/3 innings, with 155 strikeouts.

On March 13, 2022, he was traded by the Reds to the Minnesota Twins in return for two prospects, Ps Chase Petty and Francis Peguero.