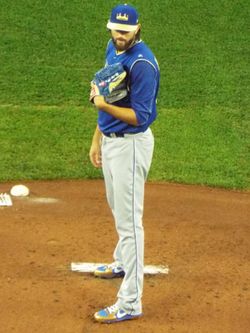 Jason Hammel went 4-7 in his sophomore season at Treasure Valley Community College, with an ERA in the 5's, but was drafted in the 10th round of the 2002 amateur draft by the Tampa Bay Devil Rays due to his tremendous upside featuring a mid 90's fastball, and a solid 12-6 curveball. He had been drafted out of high school in the 2000 amateur draft by the Seattle Mariners and also in the 2001 amateur draft by the Devil Rays. He was signed by scout Paul Kirsch and made his pro debut that summer. Hammel was a college teammate of Dutch national team pitcher Leon Boyd.

Hammel pitched in the major leagues with the Tampa Bay Devil Rays starting in 2006. He was crowded out of the Rays' pitching rotation when they suddenly became good in 2008, being the 6th starter behind Scott Kazmir, James Shields, Matt Garza, Andy Sonnanstine and Edwin Jackson. As a result, he did not pitch in the 2008 Postseason during the Rays' run to the World Series, and after the season was sent to the Colorado Rockies in a trade. There he found a home, staking out a place in the starting rotation in 2009 and pitching well after the Rockies got off to a terrible start that cost long-time manager Clint Hurdle his job. He was 10-8, 4.33 in 34 games; he was the Game 3 starter for the Rockies in the NLDS, facing the Philadelphia Phillies, and ended up with a no-decision. In 2010, he went 10-9 with the Rockies, again making 30 starts, but his ERA shot up to 4.80. Both in 2009 and 2010, he had given up over 200 hits in just under 180 innings, although he compensated by giving up relatively few walks. His ERA improved to 4.76 in 2011, but his record fell to 7-12 as his strikeout and walk rates both went in the wrong direction (he ended up with 94 Ks and 68 walks in 170 1/3 innings). Because of his lack of sharpness, he was moved to the bullpen in mid-August.

On February 6, 2012, Jason was traded to the Orioles along with Matt Lindstrom in return for Jeremy Guthrie. In his first start for his new team on April 8th, he was outstanding, keeping the Minnesota Twins hitless through 7 innings before giving up a run in the 8th. He was credited with the O's 3-1 win, completing a season-opening three-game sweep. On June 16, he was even better, pitching a one-hit shutout against the Atlanta Braves, 5-0, to improve his record to 7-2, 2.87. In his next start, he matched his career high with 10 strikeouts in a 2-1 win over the Washington Nationals. He was in contention for a spot on the American League All-Star squad but lost out in the Final Man Vote. Immediately after the contest, he was placed on the disabled list with a knee injury that took him out of his start on July 13th. He underwent arthroscopic surgery three days later. He only pitched two more times the rest of the season, the last time on September 11th, when he felt a return of the pain in his knee. He ended the season at 8-6, 3.43 in 20 starts, but was a surprise choice to start Game 1 of the ALDS against the New York Yankees on October 7th. He did fairly well, giving up 2 runs in 5 2/3 innings and keeping pace with his opponent CC Sabathia in a game which the Orioles lost, 7-2, on a 9th-inning outburst by the Yankees. He again faced Sabathia and again pitched well in the deciding Game 5 on October 12th, but the two runs he allowed over 6 innings were enough to be charged with the loss, as Sabathia pitched a complete game four-hitter to win, 3 - 1. The loss ended the Orioles' Cinderella season.

Hammel was named the Orioles' Opening Day starter in 2013 and was a 7-4 winner over Tampa Bay on April 2nd. He was 7-2 at the end of May, in spite of a 4.98 ERA, then did not win again for the rest of the year, in spite of making 12 more starts. He was placed on the disabled list at the start of August and did not come back until September after a couple of rehabilitation appearances in the minors. He ended up at 7-8, 4.97, pitching 139 1/3 innings. He became a free agent after the season and signed with the Chicago Cubs. He picked up the win in his first start for his new team on April 3, 2014 when he held the Pittsburgh Pirates to a run on 2 hits in 6 2/3 innings. He continued to pitch very well for the Cubs, in spite of having a weak team behind him, and was a very good 8-5, 2.98 in 17 starts on July 4th when he was traded to the Oakland Athletics along with fellow starter Jeff Samardzija in return for three prospects, SS Addison Russell, OF Billy McKinney and P Dan Straily. He lost his first start with the A's, going down, 5-2, to the San Francisco Giants on July 9th. He ended up going 2-6, 4.26 in 13 games with the A's, for a combined record of 10-11, 3.47; his 158 strikeouts were a personal best. He ended up being used in relief in the Wild Card Game against the Kansas City Royals. It was a bit of a desperation move for manager Bob Melvin: the Royals had just tied the score in the bottom of the 12th, and Melvin had burned through his entire bullpen and wanted a righty to face Salvador Perez with the winning run on base. Hammel came into the unfamiliar situation, allowed runner Christian Colon to steal second to place himself into scoring position, and then gave up a single down the third base line to Perez that sealed the game. Hammel was a free agent after the season and decided to return to the Cubs, signing a two-year deal for $20 million on December 8th.

Jason had an excellent first half for the Cubs in 2015, putting up a record of 5-4, 2.86 in 17 starts before the All-Star break. He wasn't as effective after that, but still won five more times to end the season at 10-7, 3.74, the fourth time he had reached double figures in the win column. He pitched 170 2/3 innings and struck out a career-high 172 batters. The Cubs won the Wild Card Game against the Pittsburgh Pirates, putting them in the Division Series against the St. Louis Cardinals. Hammel was tabbed to start Game 4 on October 13th, although he was on a very short leash. He struggled in the 1st, giving up a pair of runs on a Stephen Piscotty homer before he had retired anyone, but he managed to settle down, and in the bottom of the 2nd, he lashed a RBI single against John Lackey to put the Cubs on the board. Javier Baez followed with a three-run homer. He pitched a scoreless 3rd, but after walking Jhonny Peralta to lead off the 4th, he was removed in favor of Justin Grimm as the Cubs hung on for a 6-4 win on their way to upsetting the Cardinals. He also started Game 4 of the NLCS against the New York Mets on April 21st. By then, the Cubs were down, three games to none and he got off on the wrong foot again, allowing four runs in the 1st on back-to-back homers by Lucas Duda and Travis d'Arnaud. He was lifted in favor of Travis Wood after allowing a one-out walk to David Wright in the 2nd and was charged with the Cubs' 8-3 loss.

He started off the 2016 season very strong as after three starts, he was 2-0 with an ERA of 1.00 in 18 innings. This included a game on April 19th in which he gave up one run in 6 innings against the Cardinals and drove in both of his team's runs in a 2-1 win. He set a new personal best for wins that year, with a record of 15-10, contributing to the Cubs' 103-win season, but he was hit hard down the stretch, ending up with an ERA of 3.83. Consequently, He was kept off the postseason roster in favor of the team's other four starters, who had all done better. After the season, he became a free agent and on February 6, 2017 signed a two-year deal with the Kansas City Royals worth $16 million. The Royals were suddenly in need of starting pitching following the tragic off-season death of Yordano Ventura. He went 8-13, 5.29 in 32 games that first season, with 145 strikeouts in 180 1/3 innings. In 2018, he did even worse, as he was 4-14, 6.02 with a team that lost over 100 games. After the season, he signed a minor league contract with the Texas Rangers, and did well enough in spring training in 2019 to win a spot on the team as a long reliever. However, on March 23rd, he announced that he would decline the job, choosing to retire after 13 seasons in order to spend more time with his family.