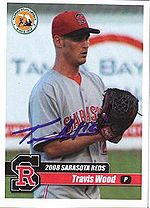 Travis Wood set a minor league ERA record in 2009 and came to the majors the next year.

The Cincinnati Reds picked Wood in the second round of the 2005 amateur draft, the first of five straight pitchers after they took Jay Bruce in round one. Other hurlers to follow included Sam LeCure (4th round), James Avery (5th), Jeff Stevens (6th) and Logan Ondrusek (13th). As a high school senior, Wood had gone 10-1 with a save and 0.52 ERA, striking out 146 in 67 innings while allowing only 17 hits. The 60th pick of the draft, he was signed by scout Mike Keenan for a $600,000 bonus.

Wood was 10-5 with a 3.66 ERA for the 2006 Dayton Dragons, holding opponents to a .215 average and fanning 133 in 140 innings. He did not make the Baseball America list of the top 20 Midwest League prospects though three other lefties were chosen in Jake McGee, Jaime Garcia and Donnie Veal.

After an awful AA showing in 2008, Travis turned things around in 2009. He started off 9-3 with a 1.21 ERA and .189 opponent average for the Carolina Mudcats while improving his control - 37 walks in 119 innings. He led the Southern League in ERA, an incredible 1.61 ahead of runner-up John Ely. He set a new league record for ERA. His .189 opponent average and 7.79 K per 9 innings also led the SL that year. Wood would be named the SL's Most Outstanding Pitcher. Baseball America rated him as having the best control and changeup in the league, but as only the #20 prospect overall. While he was a veteran minor leaguer, he was still only 22.

In late July, Travis was called up to the Louisville Bats, where he was somewhat more hittable but more than held his own (4-2, 3.14). Overall, he led Reds farmhands in wins (13) and ERA (1.77) and his 135 strikeouts were two shy of leader Matt Fairel. He was named the Reds' Minor League Pitcher of the Year. In the minor leagues, he was second to Brad Meyers in ERA, by .05, and .08 ahead of #3 Madison Bumgarner. His .204 opponent average tied Samuel Deduno for 5th among minor league starters.

Wood retired the first batter he faced in the majors, Tyler Colvin, on a pop fly. His first hit came to his 5th batter, Alfonso Soriano. In the top of the 4th, Wood got his first hit, a single off Carlos Silva. He did not allow a run in his first 7 innings and was leading Silva 2-0. In the 8th, though, he began by walking Geovany Soto and Starlin Castro. Nick Masset relieved Wood and allowed both runners to score to cost Wood his 0.00 ERA and a chance at his first win. Four days later, Travis was roughed up for 5 runs in 4 2/3 innings in a no-decision but again showed a good bat, tripling in one run. He flirted with immortality in his third start on July 10th. Matched up against Roy Halladay of the Philadelphia Phillies, who had thrown a perfect game earlier in the season, it was Wood who was untouchable for the first 8th innings. He gave up a single to Carlos Ruiz in the 9th to lose the perfect game and no-hitter, then was lifted for a pinch-hitter in the 10th after pitching 9 scoreless innings, having failed to receive any run support. The Reds eventually lost the game, 1-0 in 11 innings. Overall in his rookie year, Wood went 5-4 with a 3.51 ERA in 17 starts, giving up only 85 hits in 102 2/3 innings. As a hitter, he was 7 for 37 with 2 doubles, a triple and a homer. In the NLDS, he held the Phillies to one hit and no runs over 3 1/3 innings in his only appearance, as a reliever.

Wood was not as outstanding in 2011, going 6-6 with a 4.84 ERA in 22 games, including 18 starts. He pitched 106 innings, but in marked contrast with the previous season, gave up 118 hits. He also spent time back at Louisville, where he was 2-3, 5.33 in 10 starts. On December 21st, along with Dave Sappelt and Ronald Torreyes, he was traded to the Chicago Cubs for reliever Sean Marshall, with the Cubs planning to make him their 4th or 5th starter in 2012.

On July 27, 2012, Wood tied an unenviable Cubs record by giving up 5 homers to the St. Louis Cardinals in one start. Each of the homers came in a separate inning: Matt Holliday in the 1st, Yadier Molina with a two-run shot in the 2nd, Lance Berkman in the 3rd, Matt Carpenter in the 4th to break a 6-6 tie, and Allen Craig in the 5th for the killer blow in a 9-6 loss. No team had hit home runs in each of the first 5 innings of a game since the Houston Astros on October 2, 2004. It was indeed not a particularly good year all around from Travis, as he ended the season with a record of 6-13 and a 4.27 ERA in 26 starts. He did pitch 156 innings, a career high. He was back in the Cubs rotation in 2013, and did a lot better, as he had already racked up 5 wins by the end of May. He had a memorable game on May 30th when he defeated the Chicago White Sox, 8-3, hitting a grand slam off Jake Peavy in the 4th inning in the process. Jason Marquis had been the last Cubs pitcher to hit a grand slam, back in 2008, and it was already his 5th career home run - and second of the season. He was named to the All-Star team for the first time that year, largely because the Cubs needed one representative. His record that season was no great shakes at 9-12, but he did manage to pitch 200 innings with a very solid 3.11 ERA and a 144/66 K/W ratio, and would have deserved better had he had a more competitive team than the last-place Cubs playing behind him.

On June 16, 2014, Wood won a game with his bat for the Cubs, when he hit an RBI double with two outs in the 13th innings as a pinch-hitter against the Miami Marlins. Both teams were running out of available players by that point: the Marlins had had to use starter Jacob Turner in relief, and he gave up the game-winning hit to Wood.

On June 28, 2016, he was used in left field in a wild and crazy game against his former team, the Reds, a result of the Cubs running out of position players. With the score tied 2-2 in the 13th inning, manager Joe Maddon made a double switch, replacing Trevor Cahill with Joel Peralta on the mound, with Wood replacing Chris Coghlan in left field. Peralta induced an inning-ending double play and Wood remained in left to start the 14th as Spencer Patton took over on the mound. But after one out, Maddon called on Wood to face Jay Bruce while Patton took over for him in left. He retired the Reds' slugger, then went back to left as Patton got the last out. The Cubs scored five runs in the top of the 15th, then Wood came to the mound to pitch the bottom of the innings, as Patton had in the meantime been replaced by a pinch-hitter - pitcher Jason Hammel. Maddon had to use another pitcher to finish the game in left field, this time reliever Pedro Strop. The experiment had seemingly gone so well that Maddon tried it again on July 31st against the Seattle Mariners. Wood came into the game to replace Joe Nathan with two on and none out in the 6th and managed to get out of the inning unscathed, then opened the 7th in left field, having replaced Chris Coghlan while Strop stepped out to the mound. he made an excellent play to snag a line drive off the bat of Franklin Gutierrez, crashing into the ivy at Wrigley Field for the second out, then he came back to pitch with two outs in the 8th and picked Shawn O'Malley off first base for the final out. Mike Montgomery relieved him to start the 9th, but his strong performance both on the mound and in left kept the game close, and the Cubs rallied to score three runs in the bottom of the 9th to tie the game, then won it in the 12th inning on another unusual but brilliant move by Maddon, who sent P Jon Lester to pinch-hit and lay down a squeeze bunt that drove in the winning run. Wood was one of the heroes of the Cubs' 5-2 win over the San Francisco Giants in Game 2 of the NLDS on October 8th. He replaced Kyle Hendricks in the 4th when he was forced to leave the game after having been hit on the forearm by a batted ball, then in the bottom of the inning hit a home run to deep left field off George Kontos to increase Chicago's lead to 5-2. He was only the second relief pitcher in postseason history to hit a home run, following Rosy Ryan in the 1924 World Series. He pitched one and a third inning and was given credit for the win as Hendricks had not pitched the required five innings.

On February 13, 2017, he signed a two-year contract with the Kansas City Royals for $12 million, a few days after the Royals had inked his former Cubs teammate Jason Hammel. He was expected to be given a chance to earn a job as a starting pitcher with his new team. However, in 28 appearances for the Royals, he made only 3 starts, and his record was an unimpressive 1-3, 6.91. With the Royals having recovered from an awful start and now back in the thick of the race for a postseason slot, they swung a big trade with the San Diego Padres to improve their pitching staff. Wood headed to the West Coast along with injured P Matt Strahm and infield prospect Esteury Ruiz while three major league pitchers headed back to Kansas City: Ryan Buchter, Trevor Cahill and Brandon Maurer. In his first start with the Padres on July 28th, he allowed only 2 hits in 6 innings as he combined with two relievers for a 3-2 win over the Pittsburgh Pirates. He made 11 starts for San Diego, going 3-4, 6.71. He was released by the Padres that December and signed a free agent contract with the Detroit Tigers. However, he suffered a major injury after just one inning of work in spring training in 2018, when he tore the ACL and meniscus on his left knee when he fell during the run-down of an opposite player. The injury required surgery and putting a premature end to his season. Ironically, he had shown up in camp already injured, as he had a bandage on the index finger of his right (non-throwing) hand, the result of an off-season mishap with a hunting bow.