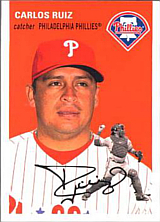 Carlos Ruiz was signed by scout Allan Lewis for $8,000 in December 1998. He made his pro debut with the DSL Phillies the next summer.

Ruiz initially turned down a role in the 2009 World Baseball Classic but later agreed to play. He went 2 for 5 with a walk for Panama, finishing 2nd to Luis Durango in OPS on the team. he had previously helped Panama win a Gold in the 1997 Central American Games.

Ruiz had the best season of his career with the Phillies in 2012, setting career highs in almost every offensive category, including batting average (.325), slugging percentage (.540), hits (121), doubles (32), homers (16), RBI (68) and total bases (201). He was rewarded by being named to the All-Star team for the first time. He followed by going 4 for 13 with three walks and two RBI for Panama in the 2013 World Baseball Classic Qualifiers that fall. In the 9th of the finale against Brazil, he came up with one on and one out, down 1-0, and singling off Thyago Vieira, but Carlos Lee and Ruben Rivera were retired and Panama failed to advance. On November 27th, he was handed a 25-game suspension to be served at the beginning of the 2013 season for testing positive to amphetamines. In a statement, he accepted responsibility for the positive test: "I am sincerely regretful for my mistake in taking a prohibited stimulant. I apologize to my teammates, the Phillies organization, and the Philadelphia fans. I will serve the imposed 25-game suspension to begin the season and I look forward to returning to the field." He claimed the amphetamine was used to treat attention deficit hyperactivity disorder but that he had neglected to obtain the proper medical authorizations. He was reinstated on April 28th. Carlos only played 16 games before he had to miss more time, being placed on the disabled list on May 20th with a hamstring injury. In the end, he played only 92 games, hitting .268 with 5 homers and 37 RBI.

In spite of his coming off his poorest season in five years at age 34 at a position which cuts down on longevity, the Phillies took a gamble by signing him to a three-year contract worth $26 million on November 21, 2013. On June 27, 2014, he was hit on the temple during an at-bat and suffered a concussion, putting him on the disabled list.

On April 28, 2015, he was part of the first-ever Panamanian starting battery in baseball when he caught countryman Severino Gonzalez's major league debut. He played 86 games that season, hitting .211 with 2 homers and 22 RBI. With the Phillies starting a significant rebuilding effort, it was clear that his days as the starter were numbered.

Back with Panama for the 2017 World Baseball Classic Qualifiers in the spring of 2016, he hit .417/.529/1.000. In their opening win over defending WBC team France, he drove in the first run with a sacrifice fly off Owen Ozanich to bring in Edgar Muñoz‏‎ then added a solo homer and a two-run dinger, both off Ozanich, as the star of the game. In the 2-1 loss to Colombia in the finale, he got the lone Panamanian run, doubling off Nabil Crismatt in the 4th and scoring on a Carlos Quiroz hit for a 1-0 lead. For the Panama pool, he tied Javy Guerra for the most homers, tied for the most hits (5), tied Guerra for the most RBI (5), led in total bases (12, one over Guerra, the most in the first three qualifiers), tied for first in walks (4), led in slugging (.154 over Guerra) and led in OPS (184 over Frédéric Hanvi). It still wasn't enough to get Panama back into the WBC. In 2016, he played his 11th season for the Phillies, but was now merely a backup for Cameron Rupp. He hit .261 in 48 games, then on August 25th was traded to the Los Angeles Dodgers in return for C A.J. Ellis and minor leaguer Tommy Bergjans. He hit .278 in 14 games for the Dodgers but had some big hits in the postseason, including a two-run pinch homer in Game 3 of the NLDS and a pinch-hit RBI single off Sammy Solis of the Washington Nationals in Game 4 of the same series. His stay with the Dodgers was brief, however, as on November 7th he was traded to the Seattle Mariners in return for P Vidal Nuno. He made his lone career pitching appearance as a Mariner, his final big league season.

Although he was recognized as one of the top defensive catchers in the game, he never won a Gold Glove because of stiff competition from Yadier Molina of the St. Louis Cardinals, who is considered one of the best of all time at the position. He is one of two catchers in major league history, with Jason Varitek, to have caught four no-hitters: two by Roy Halladay, including one in the postseason and the other a perfect game, a shared no-hitter started by Cole Hamels and a complete game one by Hamels. Hall of Famer Ray Schalk was also long credited with the feat, although one of the no-hit games he caught is no longer official following changes in the rules governing no-hitters adopted in 1990.