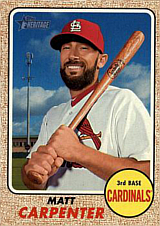 "Carpenter is the epitome of a professional grinder... This guy's as tough an out as there is in the National League, especially when the stakes are raised." - A.J. Ellis 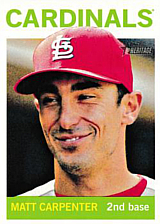 Matt Carpenter became the first second baseman in St. Louis Cardinals history to win a Silver Slugger Award, leading the NL in hits, runs scored and doubles in 2013, the same year he established himself as a regular and the team's leadoff hitter. He is a three-time All-Star who has roamed all over the Cardinal infield.

In 2011, he was with the AAA Memphis Redbirds, hitting .300/.417/.463 in 130 games with 29 doubles, 12 homers and 70 RBI. He went 1-for-15 (a double off Kerry Wood being the lone hit) in his first taste of the big leagues and was not on the postseason roster as the Cards went on to win the World Series. He led the Pacific Coast League with 84 walks (3 more than Cole Gillespie, 8th-most in the affiliated minors) and was 4th in OBP (between Collin Cowgill and Brandon Allen). In the St. Louis chain, he was tops in OBP (28 points more than anyone else), 3rd in doubles (behind Ryan Jackson and Nick Stavinoha), 5th in hits (130) and tied for 5th in RBI.

With David Freese emerging as the Cardinals' third baseman of the future thanks to an outstanding postseason in 2011, Carpenter was turned into more of a utility player before the 2012 season. He only played 6 games in the minors, spending the majority of his time with the big league squad, where he appeared in 114 games, hitting .294/.365/.463 with 22 doubles and 6 homers in 296 at bats. He split his time between first base, where he subbed ably for an injured Lance Berkman, third base and the outfield, also playing a few games at second base. He had a hit in his only at bat in the Wild Card Game against the Atlanta Braves, but was 0 for 4 as the Cards defeated the Washington Nationals in the NLDS. He was the hero of Game 3 of the 2012 NLCS on October 17th. Against the San Francisco Giants, he replaced an injured Carlos Beltran in the 2nd inning and, in his first at-bat in the 3rd inning, he took Matt Cain deep for a two-run homer as the Cardinals won, 3-1. Carpenter had been 4-for-4 lifetime against Cain prior to the game.

Installed as the Cardinals' starting second baseman and leadoff hitter in 2013, Carpenter had an outstanding season, figuring among the National League leaders for hits and runs scored all year. He was named to the All-Star team for the first time and, on September 4th, tied a Cardinals team record held by Rogers Hornsby, Frankie Frisch and Sparky Adams with his 46th double of the season. Adams was the last to accomplish the feat, back in 1931, and there was almost a month of the season left for Matt to annihilate the mark. Indeed, he finished with 55 doubles, leading the NL (11 more than teammate runner-up Yadier Molina), as did his 199 hits (8 more than Daniel Murphy) and 126 runs scored (19 ahead of Shin-Soo Choo). He hit .318/.392/.481 in 157 games, driving in 78 runs from the leadoff spot. He was also 6th in the league in average (between Jayson Werth and Andrew McCutchen), 7th in OBP (between Freddie Freeman and Troy Tulowitzki), 3rd in total bases (301, behind Paul Goldschmidt and Hunter Pence), tied for 9th in walks (72, even with Adam LaRoche), third in extra-base hits (behind Goldschmidt and Jay Bruce), 8th in OPS+ (between Choo and Brandon Belt) and first in double plays turned at second base (97). He was shut down by the pitching of the Pittsburgh Pirates in the Division Series, going 1-for-19 with a skinny single. He was better in the next two rounds, hitting .261/.333/.435 with 4 runs scored and 2 RBI in the NLCS and .296/.286/.333 with 3 runs scored and 2 RBI in the World Series, which St. Louis dropped to the Boston Red Sox. At season's end, he won his first Silver Slugger Award and finished 4th in voting for the 2013 National League Most Valuable Player Award behind McCutchen, Goldschmidt and teammate Molina.

During spring training 2014, Carpenter signed a six-year extension, with an option for a seventh, for $52 million. That made him the fifth member of the team signed for the long term, with pitcher Adam Wainwright, outfielders Matt Holliday and Allen Craig and Yadi. He played 158 games that season, leading the National League with 709 plate appearances and 95 walks. He hit .272 with a .375 OBP, scored 99 runs, hit 33 doubles and 8 homers and drove in 59 runs. He hit .375 in the NLDS against the Los Angeles Dodgers, with 3 homers and 7 RBI, then hit .200 with another homer as the Cardinals were eliminated by the San Francisco Giants in the NLCS. He started the 2015 season red hot, as after 27 games, he was hitting .333 with a NL-leading 14 doubles, 5 homers, 23 runs scored and 20 RBI. The Cardinals had the best record in the majors at that point, so it came as a surprise when he had to take some time off in early May with what the Cardinals medical staff termed as "extreme fatigue", characterized by light-headedness, dehydration, an accelerated heart rate and difficulty with sleep. He did not miss much time, as he played 154 games, and the Cards kept their baseball-best record to the end. He hit .272 again, scored 101 runs, led the NL with 44 doubles and added 28 homers and 84 RBI in what was another tremendous all-around season. In the Division Series, he hit .235 with a homer and 3 runs scored as the Cards were upset by the Chicago Cubs in four games.

In 2016, he was back starting at third base at the beginning of the season. He was hitting .281 with 39 runs scored in 54 games on June 6th when the Cards shuffled their infield in order to accommodate Jhonny Peralta, coming back from a torn ligament in his thumb. Peralta's replacement at shortstop, Aledmys Diaz, was playing extremely well, so the Cardinals decided to place Peralta at third base, with Carpenter heading back to second base, and Kolten Wong being sent to the minors. While he was now playing second base, he was named to his third All-Star team as a third baseman. He had to miss the game, as he was placed on the disabled list on July 7th with a strained oblique muscle. He was replaced as the sole Cardinals representative on the All-Star roster by rookie teammate Diaz. In 129 games, he hit .271 with 36 doubles and 21 homers, scoring 81 runs, with almost equal time at third, first and second base. On April 27, 2017, he hit his first career grand slam in memorable circumstances, as it was a walk-off homer off J.P. Howell which provided the Cards an 8-4 win over the Toronto Blue Jays in the 11th inning. He had become the team's starting first baseman that season, but it was an off year, as his batting average fell to .241 in 145 games, although his OBP was unaffected due to his drawing 109 walks, the first time he had received more than 100 in a season. He scored 91 runs and hit 23 homers while driving in 69 runs.

On June 26, 2018, he was 5 for 5 with 5 runs scored against the Cleveland Indians, becoming the second Cardinal ever to do so; Stan Musial had done it in 1948. On July 20th, he hit three home runs and two doubles from the leadoff spot in an 18-5 win over the Cubs, driving in 7 runs and scoring 4. He was just the second player in history to obtain that combination of extra-base hits in a game, after Kris Bryant, and the first leadoff hitter with 16 total bases. The 16 total bases also tied the team record set during Mark Whiten's four-home run game in 1993. All his damage was done in the first six innings, after which he left the game. He also led off the game with a homer for the 21st time of his career, tying Lou Brock's team career mark. The following day, July 21st, he homered in both ends of a doubleheader to make it six straight games with a long ball, tying a franchise record previously set by Mark McGwire. The year had started poorly for him, hitting just .140 after 140 plate appearances in mid-May, but he was on fire since. He was named the National League Player of the Month for July on the strength of a .333 average and 11 homers and he was also the Player of the Week in the NL for the first week of August. He tied a major league record on August 26th when he recorded 4 doubles in a 12-3 win over the Colorado Rockies; one had to go back to 1937 and Joe Medwick to find another Cards player with that many in a game. He finished the season with 36 homers and 81 RBI, 42 doubles, 111 runs scored and 102 walks; his modest .257 average was quite irrelevant given all his other contributions. He finished 9th in the MVP vote.

The Cardinals acquired All-Star first baseman Paul Goldschmidt before the 2019 season, moving Carpenter back to third base full-time. On April 10th, he signed a two-year contract extension with an option for 2022, with $37 million in guaranteed money. On June 17th, he showed everyone how to beat a defensive shift when he took advantage of a defense by the Miami Marlins that had no infielder posted on the left side of second base to bunt down the third base line and beat out a double, as pitcher Elieser Hernandez had to run it down into short left field. He then scored when the Marlins were unable to field a pop-up by the next batter, Paul DeJong. Overall, it was a disappointing year, as he hit just .226 with 15 homers and 46 RBI in 129 games. He lost playing time to rookie Tommy Edman and saw his OPS+ plummet from 143 to 91. Still, the Cardinals won a division title, but he saw only limited action in the postseason, going 1-for-5 in their Division Series win over the Atlanta Braves, and 0-for-8 when they were swept by the Washington Nationals in the NLCS.