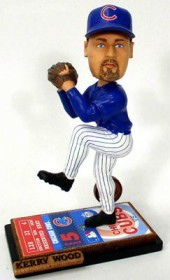 Kerry Wood is one of the great strikeout pitchers in baseball history, with 10.32 strikeouts per nine innings, ranking (as of 2012) #2 on the all-time list behind Randy Johnson. In only his fifth major league start, Kerry struck out 20 Houston Astros on May 6, 1998, a major league record. He allowed just one hit and walked none that day for a game score of 105 - the highest ever recorded in a nine-inning start. Wood pitched 14 seasons with a record of 86-75 and 63 saves, but also made 16 trips to the disabled list. As a rookie, he went 13-6, 3.40 and was named the NL Rookie of the Year; he struck out 233 batters in only 166 2/3 innings but did not pitch in September because of arm problems. However, with the Cubs in the postseason for the first time since 1989, he started Game 3 of the NLDS against the Atlanta Braves; he gave up only 1 run on 3 hits in 5 innings, but still lost the game, 6-2. It is widely thought he aggravated whatever injury he was nursing during that start, and as a result he missed the entire 1999 season.

Wood had stuff that was similar to Nolan Ryan. His pitching repertoire included a blazing fastball and a slider, and he had control problems, often throwing wild pitches. In 2003, he and Mark Prior formed the best 1-2 punch in the Major Leagues, and the Cubs' pitching staff was the best in the Major Leagues. Wood hit a three-run homer at Wrigley Field in the 2003 NLCS against the Florida Marlins.

With Todd Walker, he is alleged to have destroyed Sammy Sosa's clubhouse stereo at the end of the 2004 season. Sosa had left Wrigley Field 15 minutes prior to the end of the season home finale.

He never won more than 14 games in a single season, and never pitched more than 214 innings in any season either, as he was plagued by injuries for all of his career, as was the case for his former teammate Mark Prior. In 2001, he set a record by recording his 100th strikeout of the year after just 65 2/3 innings; that record was beaten by Max Scherzer in 2018. He was converted to the bullpen in 2007 and became the Cubs' closer in 2008, saving 34 games and being named to the All-Star team. Wood was the winning hurler in the 10,000th win in Chicago Cubs history, doing so on April 23, 2008 against the Colorado Rockies. With two outs in the 9th, he blew the save when Scott Podsednik singled and Ryan Spilborghs tripled, but Chicago scored in the 10th. Kip Wells took the loss.

On May 18, 2012, Wood announced publicly that he would pitch one more time for the Cubs, and then retire. His last outing came that same afternoon, in an interleague game against the Chicago White Sox. Wood replaced Jeff Samardzija with one out in the 8th, struck out the only batter he faced, Dayan Viciedo, and then was replaced by James Russell, leaving to a standing ovation and hugging his son Justin on the dugout steps. He had also started his career with a strikeout, fanning the Montreal Expos' Mark Grudzielanek, the first batter he faced in his debut on April 12, 1998. He was the fastest starting pitcher to reach 500 strikeouts, needing 404 2/3 innings to do so in 2001; his mark was erased by Yu Darvish, who took three fewer innings to reach the milestone total in 2014. He was also the fastest pitcher to reach 1,500 career strikeouts, needing just 1,303 innings when he did so in 2010; his record was surpassed by Chris Sale who recorded #1,500 after 1,290 innings in 2017.

He became eligible for the Hall of Fame in 2018 but received just 2 votes and was dropped from the ballot.