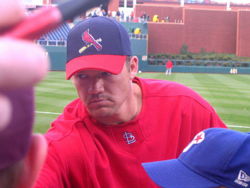 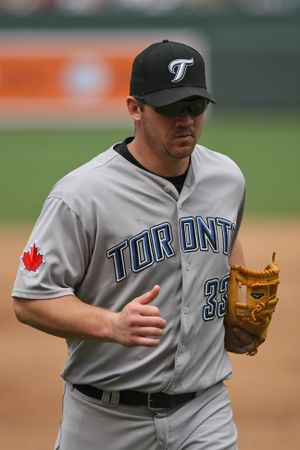 Rolen as a Jay

Scott Rolen was a second round draft pick of the Philadelphia Phillies in the 1993 amateur draft and was a seven-time Rawlings Gold Glove award winner. He was the 1997 NL Rookie of the Year. He only became eligible for that award through a freak occurence. In a game on September 7, 1996, he collected his 130th at-bat early in the game - the limit to still be considered as a rookie the following season - then was hit by a pitch in his following time at the plate. That counts as a plate appearance, but not as an at-bat, and because the injury he sustained ended his season, he was eligible for the award the next year. Ironically, Todd Hollandsworth became the Rookie of the Year in 1996 under very similar circumstances.

Besides Rolen's defensive skills, he was also a very good offensive player. From 1997 to 2002 Rolen was the main offensive threat for the Phillies. He only earned his first All-Star nod in 2002, but once the ice was broken, he returned regularly, amassing seven All-Star nods for his career.

However in 2002, the last year of Rolen's contract, he told the Phillies he would not re-sign with the club. The Phillies then looked to trade him. They finally did on July 29, 2002 when he was sent to the St. Louis Cardinals in return for relief pitcher Mike Timlin, infielder Placido Polanco and starting pitcher Bud Smith. Rolen helped lead the Cardinals to the playoffs where they lost in the first round to the Arizona Diamondbacks.

In 2004, Scott Rolen had a career year by hitting .314 with 34 homers and 124 RBI. Unfortunately, a late-season injury caused a bad playoff performance from Rolen. He was a combined 9 for 56 with all nine hits coming in the NLCS against the Houston Astros. However, in the four-game NLDS against the Los Angeles Dodgers he went 0 for 12, and in the World Series against the Boston Red Sox he went 0 for 15 as the Cardinals were swept 4 games to none. It is doubtful that the Cardinals would have had the record they did if it hadn't been for Rolen, though.

Rolen battled a left shoulder injury from 2005-2007 and needed three operations. He also got into arguments with manager Tony LaRussa following the 2006 postseason. The Cardinals parted ways with Rolen in January of 2008, trading him to the Toronto Blue Jays for another All-Star third baseman coming off injury, Troy Glaus. He retired at the end of the 2012 season.

He had a cameo in a sketch on Saturday Night Live, on December 13, 1997. He is married with two children.

Scott graduated from Jasper, Indiana High School in 1993, where he played baseball and basketball. He won top honors in high school, winning the state of Indiana's "Mr. Baseball" award given to the top high school player. He was offered several basketball scholarships from various colleges.

He was also involved in the community; he founded the Enis Furley Foundation and Camp Emma Lou in Bloomington, Indiana which support local children and their families.

He first became eligible for the Hall of Fame in the 2018 Hall of Fame Election, which was unfortunate because also making his debut on the ballot that year was Chipper Jones, one of only a small number of third basemen in history who are clearly superior to Rolen. The fact that he was never a superstar, that he played with four teams without being ever strongly associated with one, and that he was good at a number of things instead of just one all hurt his case as well. However, by certain advanced metrics, such as WAR, he is clearly qualified for the Hall of Fame. He received 10.2% of the vote in his first year, enough to remain on the ballot, but he faced a very steep climb to achieve election. He made a nice improvement, to 17.2%, in 2019 as he remained a viable longer-term candidate for the honor. He made another big move up in 2020, to 35.3% and then was the biggest gainer from the weak ballot in 2021, when no one was elected: his support vaulted to 52.9%, putting him in fourth place behind three men who had been kept out of Cooperstown largely because of character issues and whose eligibility was about to run out: Barry Bonds, Roger Clemens and Curt Schilling.