In 1968, the Detroit Tigers and St. Louis Cardinals had battled in a classic World Series. If the 1968 series was acclaimed for Denny McLain and Bob Gibson, the 2006 World Series, featuring the same two teams, was billed as an excellent managerial match-up. Tony LaRussa and Jim Leyland had long been considered two of the best managers in the game. LaRussa journeyed to three fall classics with the Oakland Athletics, winning in 1989, and reached the World Series with the Cardinals in 2004. Leyland won the 1997 World Series at the helm of the Florida Marlins. It was the first World Series featuring two championship managers since Bobby Cox and Joe Torre squared off in 1999.

It would be remembered not for brilliant strategy, but for suspicions of cheating, bad weather, and even worse defense. A rookie closer picked up a World Series-winning save for the second consecutive season, and rookie starters went toe to toe in the first game of the series. When it was all said and done, the Cardinals won their tenth World Series title; while the Tigers were left to wonder what happened to the wave of postseason magic they had been riding in the weeks prior.

The Detroit Tigers were the Cinderella story of the season, rising from years of losing to win the wild card. Detroit had had a substantial lead i its division for much of the summer, but the Minnesota Twins had rallied to win the division title during the season's final weekend. The Tigers' offense had a mix of veterans and young players. The veterans included Magglio Ordonez, Ivan Rodriguez, Placido Polanco, Sean Casey and Carlos Guillen. While Curtis Granderson, Craig Monroe, Marcus Thames and Brandon Inge were the younger contributors.

The Tigers beat the New York Yankees and Oakland A's to reach the World Series.

The Cardinals also stumbled down the stretch, losing eight in a row during the season's final month. But when the playoffs started, the Cards caught fire. Albert Pujols was the star of an experienced lineup. Scott Rolen and Jim Edmonds provided power bats next to Pujols, while David Eckstein served as the team's catalyst. The Cardinals had a strong mix of outfielders to play along side Edmonds. So Taguchi provided a fundamental approach at the plate, while Preston Wilson, Chris Duncan, and Juan Encarnacion all provided power.

Chris Carpenter was the team's ace. Jeff Suppan, Anthony Reyes, and Jeff Weaver rounded out the rotation. The group's solid October performance was a bit unexpected. Reyes was just a rookie, and Weaver had been released from the Los Angeles Angels of Anaheim earlier in the season. Young gun Adam Wainwright provided a strong arm at the end of the bullpen in place of the injured Jason Isringhausen.

St. Louis beat the San Diego Padres in the NLDS and defeated the New York Mets in a tightly-fought seven-game series in the NLCS.

For the first time in the history of the World Series, two rookies squared off with Justin Verlander of Detroit facing Anthony Reyes of the Cardinals. Reyes (5-8) had the fewest regular-season wins of any Game 1 starter in Series history as well, adding another interesting dynamic.

The Tigers looked rusty and overmatched in their first game since sweeping the Oakland Athletics in the ALCS nearly a week before. Detroit scored on an RBI single from Carlos Guillen in the 1st inning, but after that, it was all Cardinals.

Scott Rolen put the Cards on the board with a solo home run in the top of the 2nd inning. Chris Duncan hit an RBI double with two outs in the 3rd inning to give St. Louis a 2-1 edge. Albert Pujols followed with a two-run homer, making the score 4-1 after three innings.

Detroit suffered a complete meltdown in the top of the 6th, making three errors that helped the Cards tack on three more runs. After six innings, St. Louis had a comfortable 7-1 lead. That was more than Anthony Reyes needed. The right-hander was dominating into the 9th inning, allowing just two runs on four hits and a walk. At one point he retired 17 Tiger hitters in a row. Craig Monroe hit a homer in the game's final frame to make the final score 7-2.

Game 2 was played on a cold, windy and wet Michigan night. Kenny Rogers continued his postseason brilliance, but not without controversy. Tony LaRussa had a discussion with the umpires in the 1st inning about the possibility of a substance on the pitcher's left palm. Rogers said that the substance was dirt and came out for the 2nd inning with a clean hand. Some have contested that Rogers was doctoring the ball to get a better grip in the foul weather.

The veteran left-hander pitched a masterful game, allowing no runs in 8 innings. He allowed just two hits and three walks. Jeff Weaver had a much tougher night. In five innings of work, he gave up three runs on nine hits and a walk.

The Tigers scored two runs in the bottom of the 1st inning. The first on a Craig Monroe home run and the second thanks to a Carlos Guillen RBI double. Weaver pitched in and out of trouble until the Tigers scored again in the 5th. This time on an RBI single from Sean Casey.

The Cardinals' threatened the Tigers' lead in the 9th. Scott Rolen started off the rally with a single. Juan Encarnacion followed by reaching on a Todd Jones error. Jim Edmonds smacked an RBI double to make the score 3-1. Jones hit Preston Wilson, loading the bases for Yadier Molina, but he hit into a force out to end the game.

Chris Carpenter was one of the best pitchers in the league during the regular season, and he dominated Tigers hitters in the World Series. In the first World Series game ever played at the new Busch Stadium, the Cardinals' ace pitched 8 shutout innings, giving up three hits, no walks, while striking out six. Detroit used six pitchers in the game, surrendering five runs.

Through three innings it looked like the game was going to be a pitchers' duel. Nate Robertson held St. Louis hitless in the first three frames. The Cardinals broke the 0-0 tie in the 4th inning with a two-run double off the bat of Jim Edmonds. The Cardinals put two more runners on in the 5th, but were not able to drive them home. The game remained 2-0 in favor of the Cardinals until the 7th inning, when St. Louis tacked on two more runs. Joel Zumaya walked the first two batters of the inning. Pujols stepped to the plate and hit a grounder to the mound. Zumaya tried to pick up a force out at third base, but made an errant throw. Both runners scored and Pujols advanced to second.

So Taguchi scored the Cardinals' final run when Zach Miner threw a wild pitch with the bases loaded. Braden Looper shut down the Tigers in the bottom of the 9th to preserve a 5-0 St. Louis win.

Game 4 was originally to be played on Wednesday, October 25th. Rain pushed the game back to Thursday, but the delay did nothing to stall the Cardinals' momentum, nor did it help the Tigers' dreadful defense. Jeremy Bonderman recorded quality starts against the New York Yankees and Oakland A's, but failed to pitch six innings against a patient Cardinals' lineup. Jeff Suppan was less than dominating, but was able to guide St. Louis to a win.

Sean Casey opened the scoring with a solo home run in the top of the 2nd inning. Casey kept it going in the 3rd with an RBI single that drove home Curtis Granderson. Ivan Rodriguez followed suit with an RBI single of hiw own, giving the Tigers an early 3-0 lead.

David Eckstein put the Cardinals on the board with an RBI double in the bottom of the 3rd inning. The home team added another run in the 4th on a pair of doubles. Bonderman was relieved in the 6th inning after giving up a double and a walk. He gave up a total of 6 hits and 4 walks in the game. Fernando Rodney stuck out two St. Louis hitters to end the inning.

Eckstein started off a 7th inning rally with a double that should have been caught by Granderson. Instead, Granderson slipped in the wet grass. Rodney made an error on a So Taguchi bunt, allowing Eckstein to score. Preston Wilson drove Taguchi home on a single, giving the Cardinals a 4-3 lead.

Brandon Inge tied the game with a double against Adam Wainwright in the top of the 8th, but Eckstein was the man of the moment. The Cards' shortstop hit an RBI double in the bottom of the frame to give St. Louis a 5-4 lead. Wainwright pitched a perfect 9th to seal the win.

Jeff Weaver pitched the game of his life to earn the Cardinals their first World Series title since 1982. The same right-hander who toiled with the Tigers, Yankees, Dodgers and Angels gave up just four hits and one earned run in 8 innings. It was the third 8-inning gem thrown by a Cardinals pitcher in the series. The Tigers could only watch as Adam Wainwright shut the door in the 9th inning.

St. Louis scored off Justin Verlander on an RBI single from David Eckstein in the 2nd inning. Detroit took the lead on a Sean Casey home run in the top of the 4th, but the Cardinals had an answer in the bottom half of the inning. Yadier Molina and So Taguchi reached on consecutive singles. Weaver laid down a bunt towards Verlander, but the young Tiger pitcher threw the ball away. Molina scored, while Taguchi and Weaver each advanced an extra base. Taguchi scored on an Eckstein ground out to give the Cards a 3-2 lead.

The Cardinals added some cushion on a run-scoring single in the 7th inning. The Tigers' last chance came in the top of the 9th. Casey continued his strong series with a one-out double. Ivan Rodriguez grounded out, failing to advance the runner. A wild pitch allowed Ramon Santiago (running for Casey) to take third base. Placido Polanco walked. With runners on first and third, Wainwright struck out Brandon Inge. Confetti rained over the stadium and the Cardinals celebrated in front of their home crowd, the first Championship team to do so since the Anaheim Angels in 2002. 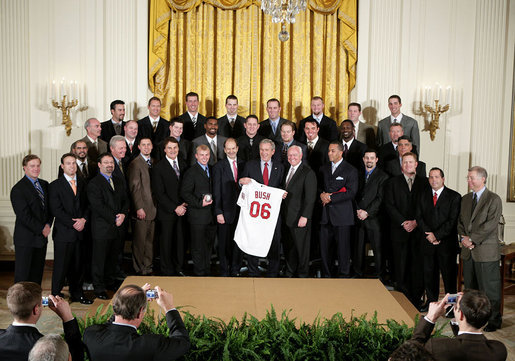