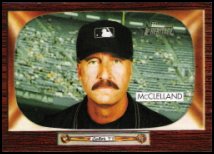 In his first full major league season, in 1983, umpire Tim McClelland became well known for calling George Brett out after hitting a home run off Goose Gossage in the "Pine Tar Game". He had umpired his first major league game on September 3, 1981. he had begun his professional umpiring career in the Florida State League in 1976.

He was voted the best umpire in the American League in 1999. He was designated a crew chief in his final seasons on the job. On May 1, 2012, he umpired his 4,000th major league game. Ironically, he was involved in a controversy in the 9th inning that day, when the Kansas City Royals' Jeff Francoeur hit a ball that bounced on top of the center field fence before being caught by Austin Jackson of the Detroit Tigers. McClelland initially ruled that Francoeur was out, and Jeff was wandering slowly back to the dugout when the Tigers, aware that there was no catch, tagged him out. However, McClelland admitted his mistake, ruled that Francoeur was not out and could stay on second base; the game was allowed to end peacefully. "You'd think a guy with 4,000 games would have a little more experience than to mess up a play like that," McClelland said good-naturedly after the game.

McClelland underwent back surgery before the 2014 season, forcing him to sit out the entire year. Although at first he did not rule out returning in 2015, he made his retirement official as spring training was about to open.

Among his achievements, 11 postseason assignments, including three World Series and three All Star Games. He worked home plate during the 2003 All-Star Game.

McClelland was one of the last umpires to work home plate from one knee instead of from a crouch.