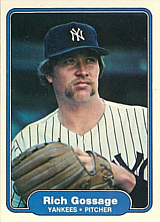 "Goose was a fierce competitor . . . who in his career set a new standard for relief pitching." - New York Yankees principal owner George Steinbrenner

"The impact that Goose Gossage had on this organization was incredible. He was the final piece to our National League championship in 1984, which really established the San Diego Padres as a Major League franchise." - Padres president Dick Freeman

Hall of Fame closer Rich "Goose" Gossage, was the Mariano Rivera of his time - a dominant relief pitcher who once went a whole season giving up only four earned runs (he had an ERA that year of 0.77). Gossage, whose career spanned 22 years, had 8 saves in World Series play and was a nine-time All-Star.

Gossage was a Colorado boy, having been born and raised in the state. He attended high school and college in the Centennial State.

The Chicago White Sox selected him in the 9th round of the 1970 amateur draft. He pitched only 3 games in the rookie league for the GCL White Sox, with an ERA of 2.81, before he was moved him up to Single A Appleton in the Midwest League, where he posted a 5.91 ERA. In 1971, he dominated in Appleton by going 18-2 with an ERA of 1.83. He was up in the majors the next year.

A Young Man in Chicago[edit] 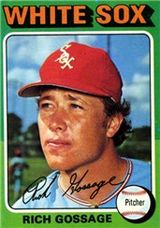 With the White Sox in 1972, at the age of 20, he went 7-1 with 2 saves, and an ERA of 4.28, pitching in relief. The team had an ERA of 3.12. It was a tumultuous time on the White Sox, partly because of the outsized personality Dick Allen, who was the league MVP that year and brought the team back to respectability after years in the basement.

The next year, 1973, Gossage struggled in the majors, and spent half the year at Iowa in the AAA American Association. After a 4-6 season in 1974, he became the White Sox fireman in 1975, earning a league-leading 26 saves. In 1976, he was used as a starter by manager Paul Richards, and went 9-17 on a staff on which Ken Brett was the starter with the lowest ERA; Dave Hamilton and Clay Carroll were used as firemen. Richards was a manager from the old school, who thought that a pitcher with a great fastball should be a starter, not realizing that Gossage had neither the stamina nor the additional pitches to find success in that role.

In his years with the White Sox, he formed a devastating lefty-righty tandem with Terry Forster, a fireballing left-hander who made the team as a 19-year-old reliever in 1971. His success jumping from the low minors to the big leagues encouraged the Sox to do the same thing with the young Gossage a year later. Forster led the AL in saves in 1974, a year before Gossage did, and he was also the subject of a misguided attempt to be turned into a starter in 1976, with similarly poor results.

The White Sox and Pittsburgh Pirates engineered an unusual trade after the 1976 season, exchanging players who were due to become free agents in one year: Gossage and Forster went to Pittsburgh, while slugger Richie Zisk moved to Chicago; all three would find new homes for the 1978 season. In his year spent in Pittsburgh in 1977, Gossage compiled 26 saves - the third-highest total in the National League - and also 11 wins, making the All-Star team for the third consecutive year. After the season, he signed a lucrative contract with the New York Yankees, where he was to stay through 1983. His arrival displaced Sparky Lyle, the reigning AL Cy Young award winner, as the Yankees closer. In two of his years with the Yankees, Gossage had 30+ saves, and he led the league in both 1978 and 1980. It was an era in which 20+ saves would usually put a reliever among the league leaders. On October 2, 1978, he pitched the final 2 2/3 innings of the one-game playoff against the Boston Red Sox that put the Yankees in the postseason. He came on in relief of winner Ron Guidry in the 7th, and while he gave up 2 runs on 5 hits, he managed to save the Yankees' 5-4 win, getting Carl Yastrzemski to pop up for the final out with Rick Burleson, representing the potential tying run, on third base.

In the 1978 World Series, he pitched six innings in relief without allowing an earned run, with his former teammate Forster suiting up for the Dodgers. In the 1981 World Series, he pitched five innings in relief without giving up an earned run again. In that World Series, he hit Los Angeles Dodgers 3B Ron Cey on the helmet with a blazing fastball, knocking him unconscious. However, in the 1980 ALCS, he gave up a tape-measure home run to George Brett of the Kansas City Royals that was a key to the Yankees being swept and manager Dick Howser losing his job. In 1979, he missed a good part of the season when he slipped and fell in a clubhouse fight with Cliff Johnson in April. Owner George Steinbrenner was furious at this turn of events and ordered that Johnson be traded away immediately.

1981 was the season in which he put up an amazing 0.77 ERA, albeit in only 32 games, because of time lost to the strike. He followed that with a 30-save season in 1982, and then went 13-5, 2.27 with 22 saves in 1983. The Yankees fell out of contention in 1982 and 1983, in part because of the constant meddling and circus atmosphere created by owner Steinbrenner. Gossage longed for a quieter atmosphere in which to work, which is why he left via free agency after the '83 season.

The Yankees were a famous team in the years Goose pitched for them, whose high-profile players were often in the news for reasons good or bad. Gossage's teammates included Reggie Jackson, Thurman Munson, Graig Nettles, Catfish Hunter, Lou Piniella, Dave Winfield and Ron Guidry.

Return to the National League[edit] 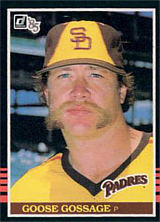 Gossage signed a free agent multi-year contract before the 1984 season with the San Diego Padres. A journalist asked why he had chosen the Padres when they offered the least money of any of the teams after him; Gossage replied that once you've earned money as an established star, you can worry about things other than the highest bidder. His first year there he helped lead the Padres to their first World Series appearance. He had two more seasons of 20+ saves in 1985 and 1986, but the Padres fell back in NL West. In 1987, with his effectiveness diminishing, he clashed with management, accusing the team of caring more about its players' moral character than about their ability to win ball games. It was not his first dust-up with a front office, as he had once called Yankee owner George Steinbrenner "the fat man upstairs".

Gossage closed out his major league career by pitching for six different teams over six seasons, still with decent ERA's, although he was no longer being used as the chief fireman. He was on the division-winning Oakland Athletics in 1992, as a set-up man for future Hall of Fame closer Dennis Eckersley. In 1990, he played briefly in Japan, pitching for the Fukuoka Daiei Hawks of the Pacific League in 23 games, going 2-3 with 8 saves and a 4.40 ERA.

At 42 years of age, he went 3-0 in 36 appearances with the Seattle Mariners in 1994. His ERA of 4.18 was better than the team's 4.99. A young Ken Griffey Jr. hit .323 with 40 home runs, and Randy Johnson anchored the pitching staff. His final major league win came in his 1,000th career appearance on August 4th, pitching one third of an inning in a 4-2 win over the California Angels. On August 8th, he pitched the final three innings of what ended up a 14-4 blowout of the Texas Rangers, earning his final save in his last appearance. The 1994 strike intervened, and he was not back the next season.

The most similar pitchers to Gossage using the similarity scores method are fellow Hall of Famers Rollie Fingers and Hoyt Wilhelm.

On June 22, 2014 the Yankees dedicated a plaque to Gossage inside Monument Park. 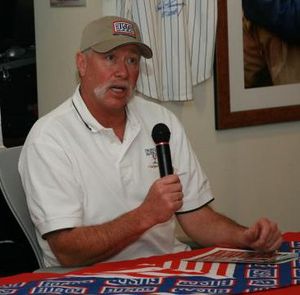 Gossage had steadily been rising in Hall of Fame voting, and was elected on January 8, 2008, the only player elected among those eligible that year. He started out by receiving 33% of the vote in his first year of eligibility in 1999, and moved up to 64.6% in 2006. In 2006, Time Magazine reported that Gossage was "livid" at not getting into the Hall of Fame, blaming it on younger writers who "have no clue". As a comparison, Bruce Sutter, elected that year, had received 59.5% of the vote two years earlier in 2004. In 2007, he got 71.2%, very close to the 75% that was needed. He was elected to the Hall the following year.

Gossage was the first player to have played in Nippon Pro Baseball to be elected to the Hall of Fame by the BBWAA; Larry Doby had been picked by the Veterans Committee. Both players were obviously picked for their work in MLB, not NPB.

Like many old-time ballplayers before him, Gossage became a vocal critic of the modern game in retirement. Among his peeves were the fact modern players showed too much emotion when they did well and did not show enough respect for the game, that closers were now mollycoddled and in no way comparable to the "Real Men" who performed the job in his day, and that instant replay was a waste of time. All of these opinions were expressed in colorful language sure to excite controversy on slow news days. In 2018, after not being invited by the Yankees to serve as a special instructor in spring training, as he had in previous year, he went on a rant against GM Brian Cashman, accusing him of going on a power trip and of having lost his baseball acumen.

"I had set the standard for my style of relief pitching so high that when I came back to the rest of the pack, everybody said I was done." - Goose Gossage

"I was brought into situations God couldn't get out of, and I got out of them." - Goose Gossage

"She is poisoning the world with her hamburgers, and we can't even get a lousy beer." - Goose Gossage, after Padres owner Joan Kroc, also in control of McDonald's, banned beer from the Padres clubhouse.