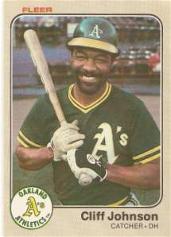 Cliff Johnson was a man without a position. He came up with the Houston Astros in 1972 as a catcher-first baseman. He lacked the arm to be a catcher and the range to play first base, but he had plenty of power at the plate. He was also tried in left field.

In his career, Johnson hit .283 against left-handed pitching but just .238 against right-handers. With the advent of the designated hitter, Johnson found success with the New York Yankees, Cleveland Indians, Oakland A's, Texas Rangers, and Toronto Blue Jays as a platoon player. He also played a half season with the Chicago Cubs. He was the long-time holder of the record for home runs by a pinch hitter with 21; he was caught and passed by Matt Stairs in 2010. The record had been held by Jerry Lynch before Johnson.

Johnson was excellent at drawing walks. His major league on-base percentage was nearly 100 points higher than his batting average.

He played for the Gold Coast Suns of the Senior Professional Baseball Association in 1989. In 47 games, he hit .290 with 2 home runs.

He is the brother-in-law of Mike Easler, and the cousin of Elijah Johnson, a minor league infielder/outfielder from 1961-1972.