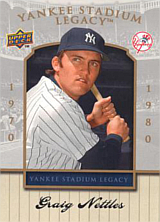 "When I was a little boy, I wanted to be a baseball player and join the circus. With the Yankees I have accomplished both." – Graig Nettles

Graig Nettles was a home-run-slugging third baseman with a great glove who played 22 years in the majors. Although thought by many to be a likely Hall of Famer, partly because of the spectacular glove work he exhibited in some of the World Series games he appeared in, he got less than 10% of the vote in the years that the baseball writers voted on him.

Nettles attended San Diego State College on a basketball scholarship. In 1964-1965, he helped the Alaska Goldpanners of the Alaska Baseball League to two league titles.

He broke in with the Minnesota Twins in 1967, and was part of the team that went from 7th in the American League in 1968 to first in the new AL Western Division in 1969. The 1969 team was managed by Billy Martin. Although Nettles showed promise at third base, he could not dislodge the Twins third baseman Harmon Killebrew, who hit 49 home runs that year. Traded to the Cleveland Indians that winter in a major deal involving Dean Chance, Luis Tiant, and Stan Williams, he got a chance to play regularly from then on, and was rarely out of the lineup during the 1970s.

Nettles showed himself to be a home run hitter at a time when relatively few home runs were being hit. In 1971, his 28 home runs were good enough for 5th in the American League, and in 1976 he led the AL with 32 home runs. Although he hit over 30 home runs only twice in his career, he was among league leaders for home runs five times.

Moving to the New York Yankees in 1972 at the age of 28, he was to play with them for eleven years. He was a five-time All Star and two-time Gold Glove winner while playing with the Yanks. In 1977 and 1978, he finished 5th and then 6th in the MVP voting. He went to the World Series four times with them, winning twice. In the 1977 Series, he batted sixth or seventh in the lineup, while in the 1978 Series, he batted fifth or sixth in the lineup.

When he finally left the Yankees, he moved to the first San Diego Padres team to go to the World Series, in 1984. He batted cleanup in the Series, behind Tony Gwynn and Steve Garvey. He played three years with San Diego (named to the All-Star team in 1985), then closed out his career playing with the Atlanta Braves in 1987 at age 42, and with the Montreal Expos in 1988 at age 43.

It is no surprise that the most similar player to Nettles, using the similarity scores method, is Darrell Evans, a contemporary third baseman who also featured a long career, a low batting average, copious home runs, and a good glove. Other third basemen that are seen as very similar to him by this method include Gary Gaetti, Ron Santo, Ron Cey, and Robin Ventura. As of April 2009, there were three Hall of Famers on his similarity scores list along with three others who are serious candidates. As of 2021, Graig remained the major league leader for most hits, home runs, and RBI by a player whose last name starts with "N".

Nettles was given the nickname of Puff by his teammates. "Puff" referred to the way Graig disappeared after playing a practical joke or starting trouble.

The brother of Jim Nettles, Graig Nettles managed and played alongside his brother for the St. Lucie Legends of the Senior Professional Baseball Association in 1989. He also played for the league's Bradenton Explorers. Nettles batted .301 and played in a total of 62 games; 10 for St. Lucie and 52 for Bradenton. His only experience of managing in the minor leagues was pretty disastrous: he led the unaffiliated Bakersfield Blaze to a dreadful 39-101 record and last place in the 1996 California League. Nettles' son, Jeff, also played in the minors and later played with the Somerset Patriots of the independent Atlantic League.

Nettles authored a book (with Peter Golenbock), Balls, released in March 1984 and featuring some stinging criticism of George Steinbrenner, among others. When The Boss caught wind of this during spring training 1984, he flipped Nettles to San Diego.

Nettles is referenced at the end of Bruce Springsteen's 1985 music video "Glory Days". Springsteen's character, a pitcher, pitches an imaginary game against the Padres, a game he loses because "Nettles got me, bottom of the ninth".